Theoretically couldn’t I disconnect the wires from the switch and wire nut the wires to be in the on position all the time (which is what we do with the switch position) and just put them behind the switch, remount the switch so that it still appears normal but doesn’t function. This would stop people from flipping a switch and screwing up rules/triggers?

I think I understand that you mean your physical “dumb” light switch? Might it be easier to just get a cover?

But yes, it is possible to bypass a physical switch. Make sure to disconnect power at the breaker first.

Do you mean do what I’m saying and then just put a plain cover over it instead of replacing it with the switch? I have the switches so I figured I would just screw them right back in. Instead of going out and buying a bunch of covers. And I understand what you’re saying about the breaker but I’ve done so many of these I rarely flip the breaker but that is a good advice.

No I meant something like this, Switch Cover. I printed a bunch of these. You can also find similar on Amazon cheap.

There are all sorts of light switch covers, child locks, etc. It might be a god idea so that the switch is still operational by just removing a screw. Here’s one example:
https://www.amazon.com/Clear-Toggle-Switch-Plate-Cover/dp/B07QD2VGPS/ref=sr_1_27?keywords=light+switch+lock&qid=1577845258&s=hi&sr=1-27

Yeah I was worried about the issue that if I didn’t need to use the switch or get into it quickly it wouldn’t be the best solution I was just trying to come up with a solution. But I think I like the clear solution the best because you don’t see it and it’s not really not to be offensive but kind of a eyesore

Only issues all of mine are paddle switches. So I’m looking for an option they can keep a paddle switch lock down similar to the toggle switch clear

For use with the Wyze bulb? I would think you would want to be able to switch it on/off with the toggle switch. Isn’t that how they are reset/paired?

A quick google and amazon search showed a bunch of options for the paddle type switches.

This is a good option but it’s just not very inexpensive.

Yes that is how you reset them and repair them but I have found when they’re in a group it’s easier to take them to a lamp pair them and then just take them back to their original location and then reinstall. when I tried to pair them in the same room it fought me for whatever reason

That is why I print these types of things. Printed in white (or color that matches your existing wall plate) I don’t think would make an eyesore. If you don’t have a printer lots of libraries do now and print shops are also very cheap.

I don’t have any wyze bulbs that is why I was unsure about the pairing process.

I live in a extremely small town. I highly doubt that they have a printer.

I’m a newbie to 3-D printers so this is probably a dumb question but do you have to buy different colored resin or does it dye as it’s printing?

I have FDM printers which use filament. You get the filament in various colors. I am not sure exactly how the resin based printers (SLA style) get color for sure. I think you get resin in the specific color you want.

So I bought these and I really like them. And I realized I have another use for them besides covering the switches for wise bulbs. I can cover the outlets in my garage and stop the mud Dobbers from packing them in with mud and nests and me having to flip the breakers and clean them out every year. So I’ve got more on order

Just stumbled on this thread…maybe late but.
Held in the mid position I used a small razor saw to cut off the switch toggle lever …a Dremel with a cutoff wheel couuld work as well.
Done this way back for a motion light out side.
The mod still allows you to turn off and on, but it takes a bit more effort to do. 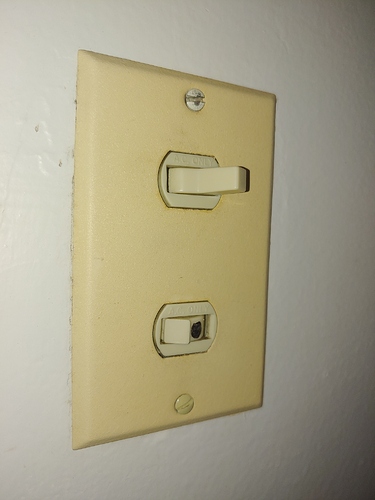