Beyond Frustrated with Outdoor Cam

I purchased two Outdoor cams recently. Both have mini SD cards installed and both are fully updated. One camera is set up with Cam Plus as well.

I’ve attempted five times to take a multi-hour time-lapse with both cameras and the finally video never loads. I’ve spent over a week of my time attempting to capture an escaping cat, and I can’t ever view the video.

Twice it has told me no time-lapse video existed even though I received notification it had run. And the other three times, I click on it, it begins to download, and then never finishes. I’ve left my phone on for HOURS and it won’t ever download. I thought I could circumvent the issue so I popped the SD card and tried to manually download it, but it is in some unreadable format.

My other idea was to just set it for the highest sensitivity so it would video the Houdini, but the cat isn’t large enough (?) to trigger the motion sensor. I know there is motion, but I get up in the morning and there are no video events. I have the motion area in the correct ‘blue’d’ area. It is set for the proper distance, and the sensitivity is at 100.

Wyze cams have been my go-to for quite a while. I have three wired and these two wireless ones. I’ve always had problems with the app now and then, but these Outdoor Cams are next level frustrating.

Any thoughts on what is happening and how to make them work as promised?

My Outdoor cams record cats and Racoons all the time. These are 2 non cam plus videos. The camera detection works best when the movement is across the PIR detection zone.

Yes. The area I’m interested in is in that area. The area I’m trying to record is busier than lawn, but there is no other movement. 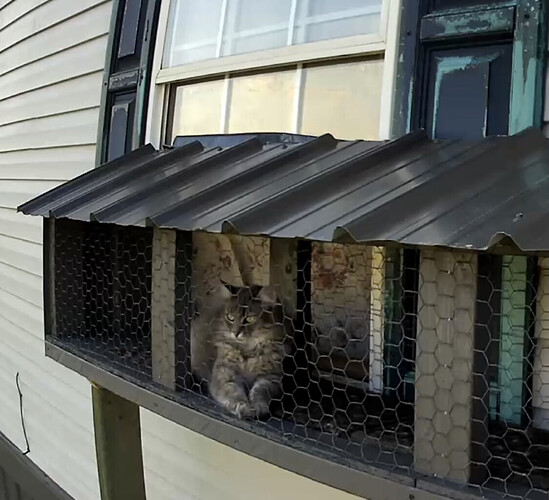 I’ve attempted five times to take a multi-hour time-lapse with both cameras and the finally video never loads. I’ve spent over a week of my time attempting to capture an escaping cat, and I can’t ever view the video.

I had this issue in the past as well doing a plant growing time lapse. And yes the WCOs are a pain with the time lapse. I couldn’t download then a friend reminded me about the SD card, I completely forgot about it, found it to be a .h264 file that my film editing tool was able to decompress. Wondershare Filmora, its not very expensive. There are also some free ones out there that the community informed me of;
Handbreak
VLC
WinFF
If you wanna check out the thread discussion it is here

I set a 10 day time lapse on a WCO for a plant growing project one of my kids were doing and the video ended today at 3PM. WCO FW V4.17.1.52 W/ 32GB SD Card in base 29.7 GB free on FW v 4.16.1.22 I am now attempting to get that video and it is no where to be found, am I missing something, doing something wrong? I have tried to get this video while on cellular 4G LTE connection and on the same wifi network. I guess the last thing to note is I have a firewalla blue installed but am only monito…

Sorry to hear of your frustrations, hope this helps.

Thank you for the work around! I will definitely look into that!