Recently, the AWS outage created problems with my eight cameras. I now have all but one, a V2 Cam Pan with CAM Plus, fully operational. The image icon of the V2 in the App has “Offline” written through its it and a slash through the cloud icon where the On/Off button was formerly located. A click on the image icon brings up what appears to be a live view. A click on the “View Playback” box reveals that the camera is online and recording to the USB card. When tested for motion the camera sends the proper notices. Thus, it appears everything is functional except the On/Off feature. I have tried power-cycling the camera several times without success. I have tried to restart the camera and that failed. Performing a factory reset is currently impossible because the camera is more than 300 miles distant. Is there anything else I can try remotely?

Sounds like the camera is working, but you are just getting the Offline Notice on the “Home Screen” of the Wye App.

Have you tried clearing the Wyze App Cache?

This can be done by opening the Wyze App, going to Account 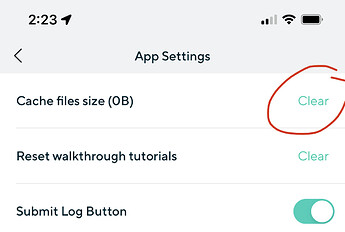 I cleared the cache. No change. I removed the power from the camera and rebooted. No change.

How do I log out of the app and back in?

I figured out how to do this. I did as instructed and the problem remains.

But camera is operational?

I saw this for awhile with my wyze thermostats they would show offline but still functioned as designed. It was unappealing to the eye but eventually went away.

The camera is operating as I initially described.

I will try to be patient but that characteristic is somewhat foreign to me. : )

A reboot, removing the power for a few moments then plugging it back in, would be my next suggestion, but… 300 miles away.

I have a number of my Wyze cameras on a smart plug so I can power cycle them for situations similar to this.

Sorry I couldn’t provide more help, you could reach out to Wyze support, but I think this issue will clear up with out much more interaction needed.

I have my cameras each powered from a smart plug. I have repowered the V2 camera several times to no avail.

Thanks for your help.

The problem ultimately resolved itself.