Automatically restart the devices if it can't connect to wyze

Most users don’t even know enough to change the default password to their router, let alone “improve their network”. I work in IT for a living and consider myself very technical yet I have have had to restart my Wyze cams because they stopped being connected. Its not about improving your network since the camera is still connected to the WiFi enough to receive the restart instruction when the existing manual restart works. Its about making the “solution” more robust.

I’m encouraging Wyze users to please vote for the automatic restart feature. Please realize that such a feature can be a life-saver. There is nothing worse than an event not being captured by your camera because it is somehow frozen, unresponsive or not connected to the network.

Please vote here [at the top of this page]

Improving your wifi connection to the cam can be done my repositioning it and your router closer together, with fewer physical obstacles in the way. My Wyze cam can be placed even outside dramatically much farther away from the router than any of the more costly cams from my home security alarm provider. So I’m guessing your router issue is location, location, location.

Devices can’t always be repositioned as a practical matter. I’ve already given examples of why this feature is useful. If you don’t think this feature would be useful for you, don’t vote for it.

What is the status to add this feature in. Currently, I have 4 cams, they are not stable, and I have to manually reboot frequently.
The earlier version of the App had a option to restart the cams based on a schedule. But the option is not available in he latest version. However, the restart by App is not good option Compared to let the cam automatically restart. If that is hard to do and take more time, I would further suggested an easier option to implement.

Revise the firmware so that it allow user to setup an schedule to reboot he cam within the camera. This is much better than using the App’s schedule and App try to restart the cam.

Hi, @peterz.home! Here is the post on how to use the #Roadmap category. Please note the section on what the status tags stand for.

CenturyLink is a wonderful company

maybe you live in an area where you’re too far from the CO. Even if you had a 100mb connection, if you’re wifi signal is crap, you’ll have issues. You need good/adequate wifi coverage, that’s where extenders help. You can’t always blame your ISP.

That may be so, but the feature the OP is requesting would not be useful for ISP issues. You can disconnect your WAN/ISP and have good wifi signal & you can still access the cams if your phone is connected to the same wifi.

The majority of connection issues are related to poor wifi coverage, even if wyze implemented this feature, it’s just a bandaid fix. The real fix is to improve your wifi coverage.

apparently I’ve not the only one suffering from this and you you are correct about getting better wifi but since our govt has decided we no longer actually regulate the carriers that is COMPLETELY up to earthlink… and since i’m a hundred miles away, its pretty difficult for me to have my phone connected to the same wifi…

I’ve seen a few requests for this kind of thing. I think it’d be really cool as well.

I have 3 Wyze Cam V2’s and LOVE them. I have one in my family room, one in my garage, and one on my porch in an outdoor housing mounted under the eaves of my roof.

For context, the one in my family room is the farthest away from my router and gets about 60% signal strength and has worked perfectly ever since setting it up several months ago. However, I recently added the one on my porch which has around 85% signal strength and consistently drops connection to WiFi around every 3 days. It’s plugged in to a switch so I can power cycle pretty easily when I find it’s disconnected.

My question/topic is: When a Wyze Cam drops connection, I would love to get an alert saying that. “Porch camera is not connected.” Currently, it’s not immediately obvious when a camera disconnects. Often times several hours to a day can go by without realizing it’s not even connected to WiFi. Please update ASAP to alert when cameras become disconnected.

Additionally, I think after 5 failed reconnection attempts it should reboot itself. This would make the system much more reliable and pretty fail-proof. This would be especially useful when out of town or traveling.

Great work on such a great, easy system! 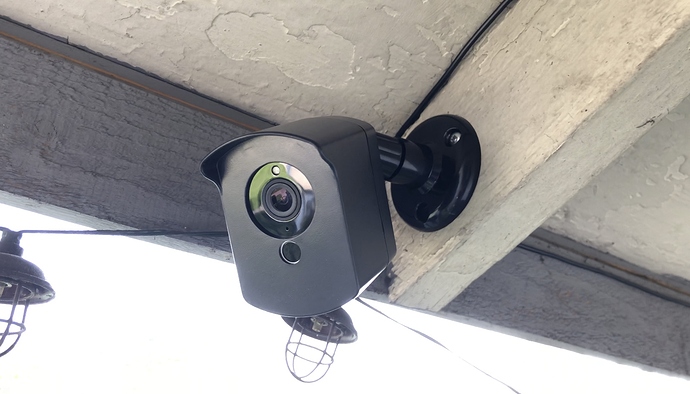 I too would love to see a scheduled restart feature. I have a cottage in a somewhat remote area. I have a rock solid wifi connection but I sometimes loose connectivity to the cameras. This only happens after power outages. I believe what happens is the Wyze camera boots faster than the router and can’t get an IP. It’s a 2 hr drive each way to reset the cameras. That being said I love the cameras and many of the features. If only a TV remote was as easy to set up and use as a Wyze Cam

Fixes like this are far far too easy to accomplish, therefore, don’t hold your breath that it will get done.

Might try plugging your cameras into a smart plug that can be cycled over the internet. Just an idea for a quick, dirty solution.

You are right, likely the simplest solution. I run a PC based automation software “HomeSeer” at my home which uses x-10 and Z-wave. I have been thinking of doing the same at the cottage but as you say, a smart plug would be quick and easy. Thanks.

I have a nest cam at my cottage that requires a frequent reset via smart plug in order to access. Plan to use smart plugs when I install WYZE gear there in the next few weeks.

Just had another experience where a Wyze V2 cam went offline and could not be restored without a hard restart. If I wasn’t on premise and had no idea the cam was offline, something bad happened that could have been captured by the cam as evidence but wasn’t because the cam was offline, I would have been pretty put off at the value of having the cam.

I just don’t see how there can be any argument against having an automatic feature for the cam to self monitor its connectivity and at least attempt to get back online by hard-reseting itself.

BTW, my WiFi is solid, using Google WiFi (Mesh network). So the suggestion that you only need a good signal for reliability is invalid in my mind, since as good as the Google mesh is supposed to be, it still screws up. There was some weird problem on my network where some devices started to report IP conflicts and I had to end up restarting my cable modem, But again, however that happened, the point is the cam should to be so robust that it can self-recover.

Not true, my ISP had issues yesterday and when service was properly restored the camera did not come back online and I had to power cycle it.

A notification of connection lost would be great and even more so an option in app to turn on an automatic reboot after x amount of time after the camera cannot heartbeat (keep connection) with their servers or just the internet.