I’d love there to be a “refresh” button )or a pull-to-refresh) on the main app screen that would update the camera thumbnails.

I often use my multiple cams to keep an eye on my kids while they’re across the house. It would be great to refresh the snapshot so I could see what room they’re in, then just launch that camera. As it is now, I have to hunt through each camera one at a time.

I love this idea!

Excellent idea! I would also like to be able to order the thumbnails. Maybe I am missing something, but if I add a camera to a room that was added earlier, it shows up at the end. I would like them to be one after the other.

A black camera would be nice.

I’ll third this request! Since Wyzecams are so affordable, I already have three and it’s a pain to have to go into each one separately get a quick update on what’s going on aroud the house. Viewing multiple at once and/or viewing quick current snapshots from home screen would be VERY valuable!

I found that when you launch the app, touch the word “Device” on the top; then it will allow you to view multiple cams at the same time.

If I touch the word devise on the top, I see the LAST picture from the camera, but not a live picture. That is the feature they would like to see. I would love that.

When I touched the “Devices” at the top of the screen inside the app, it brought me to the “Cameras” screen where it shows play buttons for all of my four cameras.

I can tap play on each one and they give me live feed (I can tell because the data streaming (KB/s) are changing).

Being able to watch forward and background at faster speeds in playback mode would be really nice. It would let you find events easier to then review them.

Peter , she was wanting the them to show live right away instead of having to push play on each individual camera. Yes, I can see all 6 cameras and click on the one I want to active - but what you see is the last time you opened the a, until you hit that specific camera I personally have no problem picking each one individually- but it would be a nice feature.

+1 to this request and also to have the thumbnails refresh when opening the app.

I’d love to see a “Mode” option. That way when I’m home I don’t get a lot notifications of movement or sound, but when I leave I easily have it record that with just a push of a button. With the feature having geofencing or even voice capability would be nice.

Thanks for the feedback, everyone! We’re definitely keeping track of the ideas and suggestions that we’re getting and passing it along to our development team so that they can evaluate the feasibility of adding such features!

Agreed this is a mandatory early fix that needs to be addressed. When more than a screens worth (3-4) are added and the sequencing fixed by the date & time added, it becomes a VERY frustrating issue.

It’s on the next thread to have Multi live view become the TOP PRIORITY and you’ll have instant refreshing of 4 cameras at once.

They are “old” stills though and there are many cameras with a multiple camera LIVE view as in this picture. (Only one of four cameras have been added) 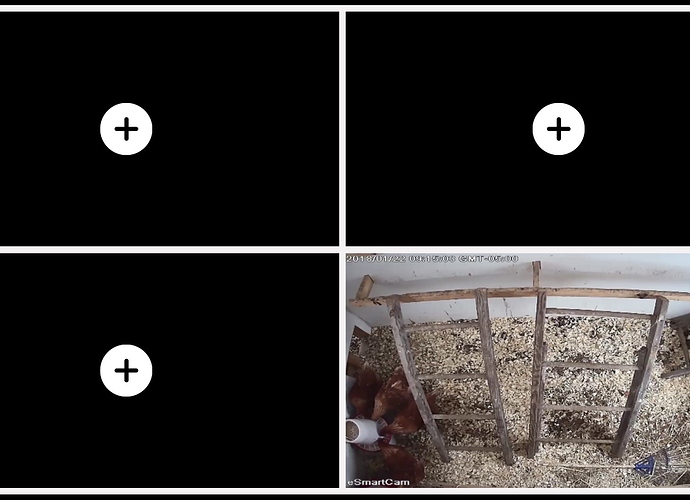 Vote on the next thread to make multi camera LIVE VIEWING the TOP software priority !