Hello all, I have 9 Wyzecams (v2). Suddenly a few days ago they stopped working (all of them at approximately the same time). All the other internet devices in my house work fine. I thought it was an issue just viewing their video via the Wyze app (I have the beta app 2.6.40) but I installed the 2.5.36 non-beta version from the Google Play store and they don’t work with that either.

I went ahead and restarted my modem and router just to be sure it wasn’t anything there. Nothing changed.

The cameras are all plugged in and the DHCP on my router has given them all IP addresses and they show live on the router with signal strengths indicated. However, when I try and view with the Wyze app, it comes up with “Connection Failed error code -20011”, “Connection failed”, “Connection has timed out error code -20011)” and I think there was one other message.

I took one of the cameras and reset it - re-added it to the app successfully - but it still refused to work showing the “Connection failed” message after trying to connect.

Each seems to have firmware 4.9.5.28 (as reported in the app) but if they updated firmware and were bricked with the bad beta firmware, I don’t think their firmware info would appear as updated (someone can confirm this).

Any suggestions on what to try?

Was “a few days ago” November 11th specifically? I guess Wyze was able to see which users downloaded the bad firmware, and they sent emails to the affected users about getting replacements. Have you checked your email? Maybe check the spam folder too, just in case.

It was November 13th that I noticed. I’m actually now wondering if it’s an Android 9 thing … I just installed Wyze on Nox Player (Android 5) and installed the app. Logged in and my cams are showing without an issue. 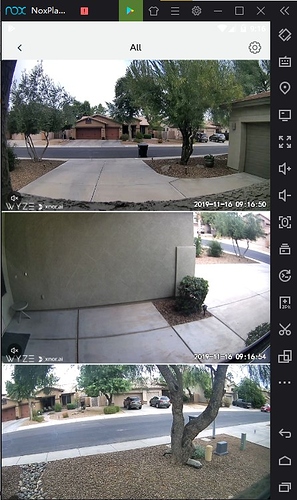 I just figured out what this was. It happened when I changed the channel on the 2.4GHz band on my router that same day. I went from channel 3 to 7. This morning I remembered I did this and went back in, switched back to channel 3, and rebooted the router. All cams work as expected now. Being on channel 7 must cause some sort of interference for the Wyze cams when being accessed from my 5GHz band wifi (which my phone and tab were on/using). The reason why Nox Player worked is because it was on wired (my PC).

Very odd - but I wanted to post the resolution in case any one else searches for this issue in the future.

thank you for the update. this is something that will undoubtedly help other users ( especially the Mavens) with future diagnosis.