minor thing, it would be nice if my pixel C was officially supported so I could get the beta app via the play store.

I had to download the normal app from your site and sideload it.

Your phone has always been above the minimum Android system requirements of the app – do you know why it had to be sideloaded?

it’s not a phone, it’s a tablet. the Pixel C, and wyze app doesn’t even show up in the play store for it.
I had to sideload it after downloading it from the site, but that doesn’t allow me to install the beta version

What version of Android is the Pixel C running? 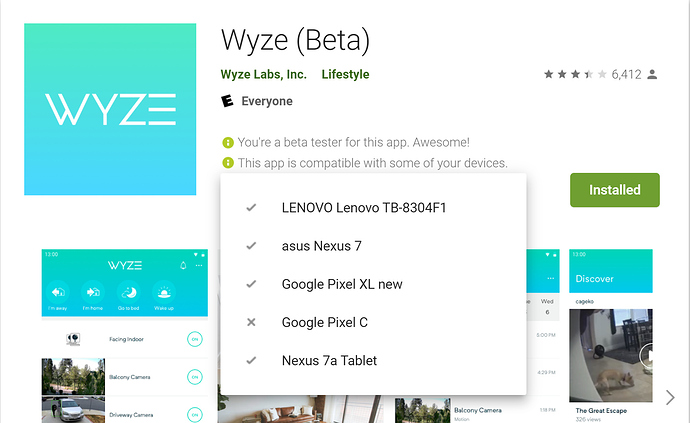 Okay, so to clarify: the production Wyze app works on your Pixel C, but only the beta does not?

Interesting that they seem to be filtering by hardware. The only restriction should be that you are on Android 5 or above.

Okay, so to clarify: the production Wyze app works on your Pixel C, but only the beta does not?

neither shows up in the play store for the pixel C.
I don’t know if the beta version works, as I can’t download it from the store.

nteresting that they seem to be filtering by hardware.

that seems to be the case. there is no reason that the C can’t run it. my 7 year old nexus tablet runs it.

I think this is “bug” issue rather than a “feature” needed. Please submit a Support Request for this issue. Thanks.

I did, they told me to post it to the wishlist.

I’m sorry, they shouldn’t have done that. I’ll pass this along to Wyze. Can you supply your support ticket number so they can look it up.

Thank you for posting this ticket number. The mods let me know about this issue and I’m bringing it up with the support team.

Any updates on this?