"YOU GUYS, we were on the TODAY show" - Email

They are coming out with Wyze Cam Pro, only requires a v3 Camera. Here is a short Video:

cbartley99. I don’t understand your point. I have one V3 installed about 10 months ago. I have a 64GB card in it currently and it records everything. I have only AI notifications turned on and all other motion events off because that was my choice. I don’t currently need alerts for anything other than people, vehicle or (pet) raccoon. If I turn on all other motion events I get an alert for “everything”. So what is your security cam definition or desire.

The point is that right up until the introduction of the home monitoring system, some people were routinely mocking those who complained about the cameras, replying that Wyze never claimed to be a security company and that the complaints were baseless.

Of course this promo’s timing immediately after a massive and sustained Wyze services outage (with a lack of timely e-mail notification) is also really unfortunate.

Was there any video linked from the email? My client stripped it out if so.

YES - My point was , that various features requests/ fixes were batted away on the basis that this was NOT a security camera. Indeed Wyze seemed to be going out of their way to avoid using that term.

Yes, there is video clip linked in the email

Jennifer Jolly, tech-life columnist for USA Today, joins the 3rd Hour of TODAY with an array of tech items you can still get in time for the holidays, including an indoor-outdoor security camera, a smart clock from Lenovo, a home theater soundbar and...

Also the Amazon page which I assume is controlled by Wyze
Now has 3 blue circles referencing press articles, again calling it a “security” camera 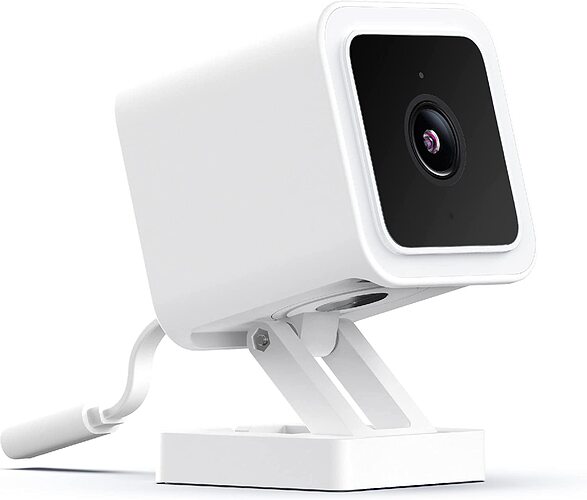 Cam v3 is the 3rd generation of Wyze’s flagship camera, Wyze Cam. Like its predecessor Wyze Cam v3 lets you see and record 1080p video right from the Wyze mobile app. New to Wyze Cam v3 is its waterproof design allowing for outdoor installation with...

So what are you trying to say???

Mine is not available as a security camera or any kind of camera right now as it’s at our property 1,700 miles away so not able to just “reboot”. This sucks so bad!! Terribly disappointed!

I understand your point. I just think of my camera as more of a surveillance cam. Since I only paid $34.99 for the V3 with one year of cam plus included 10 months ago I got what I paid for. If I was serious about security I would have spent the big $$$$$$ for something else. I personally don’t care what they call the cams.

So was Matt Lauer.

I think the point made sense to those of us that have been around here for several years. There were thread discussions that bordered on full blown arguments when someone complained about their camera missing events or having other reliability problems. The basic theme was that when someone complained, there were those that would adamantly argue that these weren’t security cameras, Wyze never said they were, or allowed them to be called that, and anyone that used them as such was basically delusional.
So for those folks in those arguments back then, this is basically a type of vindication for them that a camera sold as detecting movement, etc, has the expectation that they can be used for security and should work when needed.

YES - My point was , that various features requests/ fixes were batted away on the basis that this was NOT a security camera. Indeed Wyze seemed to be going out of their way to avoid using that term.

Here’s a rewind to about a year-and-a-half ago as a sample of what you, @raym64 & @customer say…

App in need of serious redesign - Yes or No?

I started with three cameras and tested them intensively for a few months. When Wyze told me they weren’t security cams, they were for “keeping an eye on things,” I took them at their word and lowered my expectations. That has served me well.

Here’s an esteemed boomer’s take on their current stance:

It makes perfect sense, Wyze like any company is seeking ways to monetize its product line. Legally they maintain the necessary fiction that their products should not be used for security. This protects them from liabilities in case some suffers a loss while using their products as a security device. But they are certainly blurring that line now. I would guess that this particular move will make it relatively easy for a good attorney to take them to task over an obviously mixed message.

It will be interesting to see how it pans out.

So was Matt Lauer.

The basic theme was that when someone complained, there were those that would adamantly argue that these weren’t security cameras, Wyze never said they were, or allowed them to be called that, and anyone that used them as such was basically delusional

Good summary. Quite a turn about when the foot is on the other leg, eh? I’m not gonna dwell on the past but it would be fun to compare the same people before and after the shift.

Lauer’s predations have had the side effect of giving Jennifer Aniston her first major dramatic role, so I guess that’s something?

(Gugu Mbatha-Raw is carving out a nice career though.)

I’m not gonna dwell on the past

I can handle that for you.

She was good in this:

Friends with Money - Olivia (Jennifer Aniston) is a single, always broke woman who cleans houses in Los Angeles to make ends meet. She is in a group of wealthy friends consisting of: Franny (Joan Cusack) – a stay at home mom with a large trust fund, Christine (Catherine Keener) – a television writer, Jane (Frances McDormand) – a fashion designer, and their husbands.

(Gugu Mbatha-Raw is carving out a nice career though.)

You see what’s happening here, don’t you? Given the opportunity by @cbartley99 , we’re becoming… THE TODAY SHOW!!!

And here’s the earlier Topic (~2.5 years) I remembered but couldn’t immediately find:

When you come at the king you best not miss.

Information wants to be free?

Would be more compelling if he didn’t immediately misspell Wozniak’s name.

Interesting, I always assumed the “free” in that quote was as in freedom, not beer.

Security system or not? Home

I have supported this statement from the beginning, but… Months ago they introduced their door/window sensors and motion sensors. They are now marketing and selling a smart lock. They can make whatever claim the want, but this is now entirely disingenuous. EDIT: Unless of course we’re not expected to secure our homes with the lock.