Wyze Thermostat doesn't pass tests but seems to be working?

I am trying to get some confirmation, because I believe my thermostats are working, but when setting them up they did not pass the test. The fan never kicked on during the test but they seem to be functioning normally. I have two thermostats on the same system, one is upstairs and one is downstairs. I have a heat pump system for heat. Here is a picture of how they were wired, which is a little confusing because the app doesn’t cover how mine are labeled. My thermostat are honeywell and should be pretty popular. 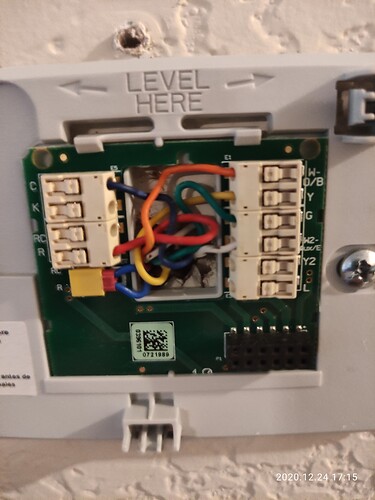 When wiring these to my new Wyze Thermostat I moved w-o/b to o/b and moved w2-aux/e to w1. The rest of the wires I just moved over to the same label.

I think it may be working but I am not sure about my heat stages. Any help would be appreciated.

I’m going from the same Honeywell wiring to the Wyze. I wired the Wyze the same way you did and the app is able to complete the testing but my heat never turns on. It just blows out the same air that it sucks in. I’ve had to go back to the Honeywell to get the heat to turn on. I have the Honeywell RTH958WF1005. I’m in Florida and the HVAC was replaced earlier this year.

That was my problem, I thought, the test it never gets hot but if I turn the heat on it works fine. The testing wasn’t working correctly but it seems to work fine.

I have this same issue. System tests won’t work at all, but if I manually adjust the thermostat for heat or cool it works as expected. Is this a bad thermostat? Should I request a replacement or be worried?

System tests are only testing out a single component, if you have a multistage system they will not send out the same signals that the thermostat will send out during normal operation, apparently.

I don’t have a multistage system. The issue is in the app. After a couple of hours and resets, we triggered system testing from the thermostat itself and it worked.