Apologies if this has ever been asked before but wondering if Wyze has considered different colors for the products? (E.g., black Cam and Pan)

Only ask because we have a black mantle where we have an older Cam and the white would stick out and be too obvious if we put the pan there.

[image] At Wyze, we listen closely to our customers so that we can deliver on our promise to make the best products at the lowest possible price. Over the last year, we’ve delivered on a number of customer requests, including Alexa Integration, Alert Scheduling, Alert Video Thumbnails, and more. One of the most common requests we get is to make a black Wyze Cam. This is actually a lot harder than it sounds. We’re able to make Wyze Cam so affordable because we operate an extremely efficient s…

There are additional manufacturing costs to Wyze and logistics involved in making/selling different colors, so they haven’t re-released the black version yet. Many users have found ways to change the color with spray paint, tape, vinyl/silicon skins, enclosures, or 3D-printed covers.

Whether you are an indoor-looking-outdoor user wanting to cut down on the reflection of the camera in the window, someone that doesn’t want to freak out the neighbors in the backyard, or someone who wants the camera to be hidden from intruders, the black version of the Wyze Cam was for you. Unfortunately, it was a limited edition model, and as of this date it is no longer available. https://www.wyzecam.com/wyze-cam-black/ Now, there are lots of options for turning your Wyze cam black. Vinyl …

A project I made with Cricut vinyl cutter. [image][image] 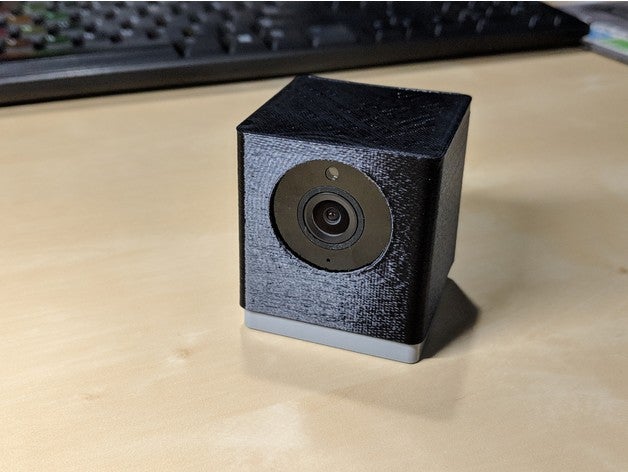 This is yet another cover for a Wyze security camera. The only differences are that I rounded off the side corners and only put in one hole. "Where's the other hole," you ask? You don't need it. After looking at the main board inside, there is...

it is also possible to win special editions if you win the community spotlight through lots of participation. …I have heard of people getting the black camera and even a clear one.

even a clear one.

I have not seen that one, that would be neat

now you have seen it

It’s HERE!! [20190406_163701] Neither black nor white!! REALLY like the transparent case - is that going to be an option? That sort of speaks of Wyze, a lot of transparency in the organization, /edit - The clear cam looks sort of “nerdy” and you can see the status light easily from two sides and the top.

Nice! Looks like that he got that a bit before I started getting involved here

yes, but its still a possibility, you never know what Wyze might have stashed away.