Wyze Cam V2 microphone “turns on” on its own

Just curious here. I always keep the mic off on my cameras,Today I went to check something on my cameras and the mics on all three of my cameras were on at the same time after checking on each one. Then, when I when back to turn each one of them off they were already turned off. Am I being hacked and spied on? What gives?

Did you by chance revert back to the production app? There is definitely a newer version of the beta firmware available.

So how do I upgrade if they all say up to date? It won’t let me add an upgrade or click anything. I know I haven’t reverted to a previous upgrade. I just let it update when it says it needs to.

settings>device info>firmware upgrade
Then revert a version or two, come out of the app, go back in and it should let you upgrade to the latest.

I just tried that and reverting doesn’t show up as an option. 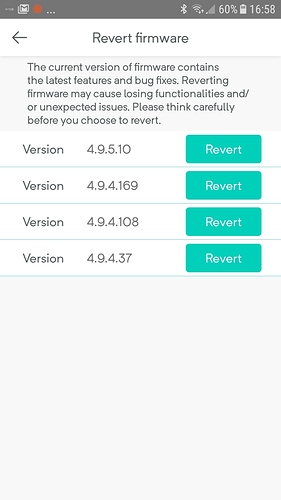 Revert only is available in the Android version of the app. iOS does not have that option. At least not that I have ever seen?

iOS does not have that option.

But I can’t understand why - It’s only on the camera you are reverting the firmware.
But it beats the heck out of the “SD card dance” we used to have to do.

Is there another way to upgrade the software. I mean if there’s newer why doesn’t it let me update anyways? The microphone coming on it’s a major security issue.

Are you on Android or iOs?

On Android you can flash the firmware. The old SD card dance.

Yes search on the support section for instructions on acquiring, downloading and installing a specific version of firmware.

But I would say you need to look at what’s preventing you from updating. It sounds like you may have other issues to deal with.

Ok, according to the link containing flash firmware updates my cameras have the last update.

When you say other issues. What other issues? Like being hacked. I still want to know my microphones are coming on.

No I was referring to the fact that you claimed NOT to have the latest version and could NOT upgrade them. If true that would indicate you had other issues such as possible network issues or maybe issues with your phone etc.

But since it turns out you DO actually have the latest firmware and therefor it correctly is telling you they can’t be upgraded we can focus on your microphone issue.

For the best results there I would recommend contacting Wyze support directly. You can start a support ticket here.

Starting a ticket. Thanks!

Not sure what you mean but I am glad you are starting a support ticket!