Timing of Videos and Timestamp a bit off

Working on a project, I programmed 3 WCOs and a v3 to record at the same time for the same duration. I did sync the times with my tablet. I visually edited the videos so that all four displayed the same time in the timestamp at beginning and end. When set in parallel tracks, the actual run times of the videos were not the same there was a measurable difference of a few seconds. Result–was not able to synchronize all four videos precisely where the timestamps would tick off in unison. This indicates an inconsistent timing circuit. Don’t panic. A few seconds won’t be noticeable for reasonable uses. I only found it because I was trying to synchronize videos. I worked on products with very precise timing, but they were for $$$$ medical and communication applications; not a $$ camera.

This Identified Non-Flying Object shows a significant problem on a different project. I wasn’t looking for the skunk, but his presence became a marker in the video. The two v3 cameras are side by side. The top view is in night vision ON, the bottom one with night vision OFF. The time stamps on the two cameras are not synchronized. After being synchronized in the video editing software, the two times tick down in unison, but the skunk appears to be in a significantly different place in each frame. If we assume the top camera to be correct, then the bottom camera is actually lagging behind real time. I dis use the time sync on both cameras when I set them up. 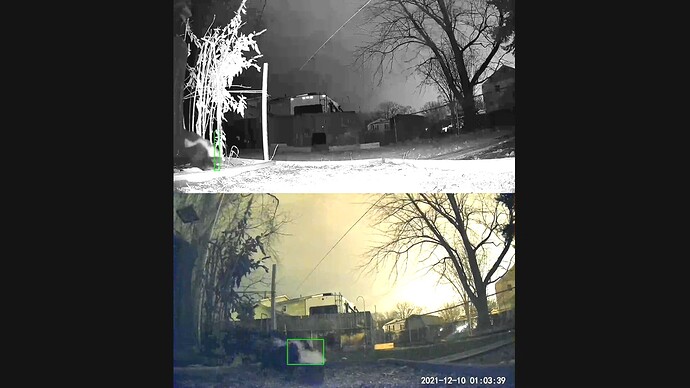