Scenes should include on/off state of group devices

Not sure if I’m doing something incorrectly or not. I have a Group called Bedroom which contains three devices, each of which is a separate Bulb. I’ve tried saving different Scenes, where each Scene has a different set of bulbs either on or off. However when I test each Scene, they don’t seem to be setting the On/Off state of each bulb as intended. Only the Brightness and Temperature are being recalled. For instance I saved a Scene where only one Bulb is on and the other two Bulbs are off. But if the other two Bulbs are already turned on, selecting that Scene does not turn them off. Hope that makes sense. 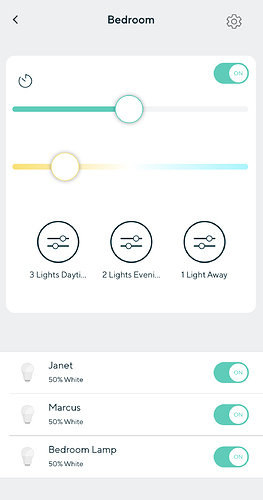 Wish I could help but I haven’t messed with scenes much. I’ll dive in and see what I can come up with but I’m sure someone will give you an answer before I do. But I do my best to come up with a solution.

I just have one scene set up and that’s it I haven’t tried to do multiples yet.

Welcome to the community, @marcusdiddle. I think this Support Article might help explain what is happening. It appears only color and brightness are controlled with scenes.
https://support.wyzecam.com/hc/en-us/articles/360030428512-Scenes

Thanks @DreadPirateRush I believe that’s what is happening. So I guess my post isn’t so much asking what I’m doing wrong, but requesting this as a feature enhancement. If I set the On/Off status of certain devices in a group, and then select “Save Scene”, my assumption is that the “Scene” being saved encompasses of all settings of all devices in the Group, including their On/Off status.

Use a shortcut for this and you can set the on/off state as well as the hue and brightness. 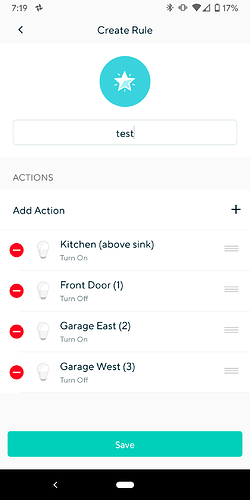 I get around this limitation by using Alexa routines