Being able to select a customized position that can be quickly accessed by pressing a button in the middle of the D-Pad will allow for customers to quickly aim their Wyze Cam Pan back at the area they most care about recording. This is especially useful if they were manually panning or using motion tracking before that.

The direction pad is pretty useful when aiming at random areas or zones or when fine tuning the camera’s aim. But having one-tap access to preset zones makes it easier to quickly go to the zone you’re only interested in without fumbling with the direction pad.

Right now, to do the same, you have to dig through 4 layers of menu. See video. 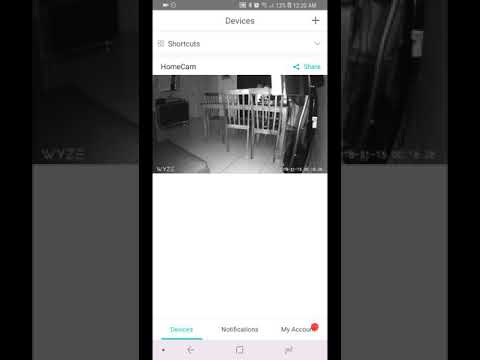 This sounds like a good idea. It could be something like a “home” or “default” position. If this gets implemented, I’d also like to see an option to have the cam automatically pan\tilt back to this position after motion tracking is done tracking an object, after tracking is turned off, after pan scan is turned off or after cam is turned on. I’m aware that the cam already has a default position that it stops at after booting up. However, both of my pan cams are installed upside down on ceilings via screw hangers so getting them to fasten tight enough and end up with the default position right where I needed it was not doable.

If you set a detection zone, or a single-waypoint for Pan Scan, then the camera will always return to that position.

Rick, thank you for the suggestions. After thinking about it some more I realized that for one of my Pan cams this didn’t matter much since it’s on pan scan 24/7 with motion tracking also enabled. Even if it’s power cycled it returns to pan scan and motion tracking after booting.

For my other Pan cam I was going to write a large paragraph explaining my situation with it. However, after composing most of it, I realized that my problems can be solved via a method that is the topic of another #roadmap discussion regarding adding more actions to shortcuts. Also, I see that turning on/off detection zone is already on that list. I hope most or all of those suggestions get implemented.

The suggestion in this thread is still a good one. Perhaps have the middle d-pad slew cam to the set detection zone? Thanks again Rick.

Suggest to add a Go To Home position in middle of navigation UI. Often the game overshoots when I change the rotation. I want to be able to make a Home Location and go back to it with one click.

I would like a feature that would allow me to “dock” my camera. SO if I get home I can press a button and turn it to the wall and when I am ready to go out I can press another button to aim the camera in the monitoring position. What would be even better would be geofencing for this function. I come home and the camera knows to automatically dock. I go out and it “arms” itself.

How about turning it off instead? You can geofence this with IFTTT.

Turning it off is nice but I find that being able to turn it to the wall gives me more piece of mind. While I am not a paranoid person – for instance, I don’t put a sticky over the webcam on my computer or anything – I feel better simply turning the camera to the wall. I think this is reflective of the fact that I can never feel 100% sure if it is off. While I also can’t feel 100% sure that the camera on my computer is off at least there I am just sitting at the computer doing work whereas my camera is watching my house and since I run around in my undies all the time . . . you get the picture. Also, if I am sitting in front of my computer I am always fully aware that I am in front of this device with a camera. My Wyze is sitting on a shelf and I constantly forget that it is there.

I turned off the pan and scan feature because the camera picked up the movement of the ceiling fan and was either constantly moving or would gradually move its focus into the corner where it was no good to anyone.

While I am no good at IFTTT I will look into this.

I turned off the pan and scan feature because the camera picked up the movement of the ceiling fan and was either constantly moving or would gradually move its focus into the corner where it was no good to anyone.

You turned off the motion tracking. Pan Scan is separate and different. Pan scan cycles among up to 4 fixed waypoints. If you only set one waypoint, you effectively lock the camera on that position (with motion tracking off). When you turn Pan Scan back off, the camera should return to the detection zone position.

Ah ha! Thank you for the information. I will look into it.

Hey guys and gals I hope you’re having a good weekend so I came across a feature that I feel would be very helpful when using the pan camera.

This would be a centering button which would go in the middle of the joystick (up, down, left, right arrows) in the center of the camera app.

On the Wizen Cam Pam it would be nice when after panning left, right, up, or down if the center of the control ring would have a button appear that said return to center (or default view / re-center) so you would not have to get it back using the same number of taps to return to the starting position.

The attached image show where I think the button should appear after using the buttons in the gray ring.

This would be great!

For the Wyze Pan Cam, In the direction control pad, there should be a center button(with a home icon) for homing the camera to a user’s predetermine location… And to pre-determine the location may be hold the home button for more than five seconds and it should Be afixed to that home position. So when the user pans or tilts away from that position they can simply tap the home button and it goes back to the normal position