Hello.
I would love to see a backup battery function for Wyze products. I think it is a security defect that the cameras can lose power. This could be achieved either housed inside a new version of camera, or even better, through a pass-through charging block. The charging block would function just like the one included in the box but also charge up a backup battery like a powerbank. If the wall socket or home lost power the camera would remain functional for some time until the powerbank discharges. This would be a valuable accessory you could sell. And, since it’s an accessory, those who didn’t want this functionality could choose not buy it - keeping the entry price of the cameras low and make this feature backwards compatible to early versions.

I’ve been thinking of setting this up myself. Of course I’ll want battery backup for my wifi router also…

I actually think Wyze is wise for now to focus on bringing unique products to market and leaving lower-margin undifferentiated opportunities for others to fill.

You make an excellent point, K-Dog. I have a small power bank that also works as a pass thru charger and I thought running the Wyze Cam power cord to it would add some security during a power outage event. As you point out, my wifi would be down so it wouldn’t really make a difference. I suppose a person could connect their Wyze Cam to a cheap cell phone acting as a wifi hot spot, while attached to a charger but that sounds cumbersome.
I think we can all agree that Wyze Cams are packed with features and are a fantastic value for the price. I own both models and love them.

Good point, I have had that thought also. I plan on getting a pass through powerbank for the router as well. This is not only to let the cameras operate but also to save my household sanity if the power was to go out keeping internet for my laptops and tablets.

But here is another opportunity for Wyze to sell a smart product. Back up power with pass through charging for wifi routers. No one is doing it, I’ve checked. My only solution now is to rig a powerbank not intended for this. It couldn’t be very difficult to manufacture, the pieces are all already in production. They’d just need to house it a little differently, in the plug perhaps with a little fan and/or vents for cooling.

Different router brands have different power voltages so any powerbank would need address this. Many low power devices seem to be migrating to USB ~5v lately but until routers do that its a little more complex.

Or you could get a UPS and just plug the router’s power supply (and perhaps some other stuff) into the UPS.

UPS is the standard that commercial applications use. Getting your home electronics on a UPS is a really nice safeguard for so many reason. I have three high end, 1000 VA units from Cyberpower. They have less expensive 1000 VA (and higher) units I would buy in a heartbeat if I need more. I’m still using the original lead acid batteries after something like 10 years. Occasional loss of power is what they are designed for. The run-time is a function of the load. Don’t connect a laser printer or sub-woofer as will damage.

Keep in mind that lead acid battery is not suited to deep cycle discharge so if you have a power outage the goal is to power down and power off, unless you have a generator, which may or may not produce clean power. UPS are designed to be powered by AC and to provide simultaneous AC output.

You might find a lithium ion with equivalent 5V input, output features. The Anker branded 10,000mAh lithium ion power pack I have does not allow for simultaneous charge while powering the outputs, so don’t assume this is an easy purchase, unless you can confirm that functionality. Lithium Ion has better deep cycle characteristics than lead acid, but they also have their own long term wear characteristics.

For the Wyze cameras, putting the right kind of lithium ion battery between the AC adapter and the camera is a great way to ensure your cameras can keep recording during a power outage. I would be interested to hear about specific models that people have identified and implemented.

Despite the v2 camera shipping with a 1A adapter my guess is that it consumes sub 0.5A as a standard USB port is 0.5A and the Dashcam USB A port can be used for daisy chaining to a second camera, which then would consume sub 0.5A and still be within the spec of the 1A charger. The PTZ version ships with a 2A adapter. I don’t recall if it supports daisy chaining, which would necessitate the USB A port being able to output more than the standard 0.5A. I don’t know if anyone has put a USB current monitor on these cameras yet. The point is that this is the information you would need in order to rate a given UPS or lithium ion powerpack for the number of hours of battery based run-time. Or take a trial and error approach and report back.

The other use case for using battery is the ability to combine with mini solar panel, in order to eliminate the need to run a wire.

dhaskit what is the small power bank that also works as a pass thru charger that you mention? I take your comment to mean that it allows for simultaneous charging the power bank whilst powering the USB output devices.

I do not have the device with me so I can’t tell you a brand name or model right now. I believe I purchased it at Walmart for $12-$15 in the electronics Dept by the cell phone accessories. It has a 1" square end profile and is about 4" long. It’s about the size of a Pez dispenser. The a/c prongs fold away and it has a USB port on it that allows it to be used while it’s being charged or when it is unplugged from the a/c wall socket as backup power for my iPhone.
I’m sure it would work fine in powering the Wyze camera but again, If power is down at your place, your wifi hub would need to have backup power as well. Some experimentation would be required.

Another idea: Walmart has a 12v Battery Jump Box that they sell in the automotive Dept. The model I purchased has a USB plug on it. It will jump start a pickup truck and I use it for backup power for my iPad & GPS receiver when flying. This device is aprox. 2" x 5" x 10". It would most likely work as backup power for a wifi system. Cost = aprox. $40. I would not expect any problems but I would also not expect the Wyze company to be responsible if for some reason my camera got fried because it pumped out too much amperage for the camera to handle. Again, I have not attached either device to my camera. Just something to consider.

As you mention, UPS is a better route.

Let Wyze stick to what they started and not get into the battery business. I think it’s a terrible idea to include a rechargeable battery in the unit. Nearly everything I purchase with a rechargeable “built-in” battery is rendered useless within a few months. I get lucky to see it last a year. If you want the cameras to remain cheaper than others, then you need to not put pressure on them to include the battery feature. Plug in your own power source - and be a bit creative. $12 at Wal-mart and a camera that lasts for years and years is much better. And guess what? When that stupid battery gets worn out - just replace it and not the camera. It’s a win-win!

As long as you have your router on a UPS you can use this handy little device from Anker: 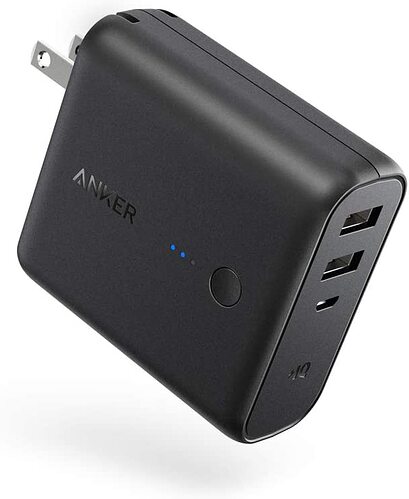 As far as I have been able to find, it is the only charger / power cell that will switch from pass through to power cell on power failure. Only thing is the camera does go off and then re-boots once the Anker Anker PowerCore Fusion 5000 2-in-1 Portable Charger and Wall Charger switches modes. I use it on one of my Wyze Pans and it works great.

Only thing is the camera does go off and then re-boots once the Anker Anker PowerCore Fusion 5000 2-in-1 Portable Charger and Wall Charger switches modes.

Powering the camera is easy, it doesn’t draw much juice. Powering the router however wouldn’t matter in most storms or accidents because if you have cable or fiber optic internet the same set of lines that bring your electricity are running with the lines that bring your cable and internet. If a tree falls during a storm you lose power, phone and internet. If you have satellite internet it’s tough to get a signal in a storm even if you have back up power. The idea of a cheap phone as a hotspot is not bad and you don’t even need a cheap phone, They sell devices that are just meant to be hot spots, I used one at a cabin that did not have access to cable wires. They are pretty cheap too, I think ours was 35 bucks and it could connect 5 devices at 3g speeds, the newer ones probably faster.

I have never lost FibreOp when the power goes out.
I follow your reasoning, I guess I’ve been lucky.

This should be exactly what OP is requesting.

And it’s cheaper here in the States: https://www.amazon.com/Anker-PowerCore-Portable-Charger-Foldable/dp/B01K702S66

The only problem I can see with your idea is, say you use the available USB ports in the back of the device too daisy chain multiple cameras… You would have to figure in each power factor, the battery source would be limited to how many devices you can support. Awesome idea for individual devices with independent power supplies.

I use this for my Router and modem Which are low power devices and this is designed for Low power devices . the anker power core deal would be good for a camera or two
https://www.amazon.com/APC-Back-UPS-Connect-BGE90M-Charging/dp/B00NTQYUA8/ref=sr_1_9?ie=UTF8&qid=1550290808&sr=8-9&keywords=APC+BGE90M

I have one of these mini UPS for two cameras. There is only 1 USB port, but a $3 splitter can easily power 2 cameras. The USB power supply is not true UPS. The camera will power cycle when the main power goes out. However, the 12V supply is UPS so it would also be perfect for your modem to keep wifi going.

I just like having peace of mind that my cameras are still recording to SD cards even while the power is out.

Has anyone tried anything like this? It’s a bit pricey considering the cost of the cameras, but it seems like it could potentially be a good option:
https://www.amazon.com/portable-off-grid-lighting-Battery-Camping/dp/B00XROF1RI