This seems to have been fixed., not sure when. If I add my camera to another account, simulating a theft, I can still view event up to 14 days old from that camera. The name is displayed as the MAC address. 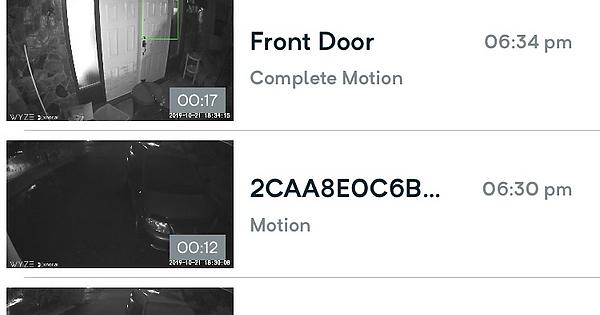 Are you on the #beta app and firmware?

Apparently they made a change in 2.6.36 so that event videos would still be available even if the device was deleted

Dear Wyze Forum users, This is Wendy Innis, the release manager from Wyze. This week, we are sharing our third Beta Android App release with our Beta Testers, 2.6.36 (Android), 2.6.55 (iOS). Features included in this release are: Complete Motion Capture App and Cloud changes Web payments and Recurly integration (in-progress and available for testing soon) View the Moment (The ability to jump from a 12-second clip into the microSD recording) Rules Improvements Add the ability to run sch…

So I still do not see an answer for the question that I have… I have two wyze cameras setup and I have a renter in my home who went to one room but it’s upstairs and he must go to an outside back patio in order to gain access to the downstairs house to use the kitchen or the laundry room.

Upon entering that back patio to the downstairs portion of the house camera one is trained on that area and should pick them up with motion detection for a person and continue to observe them as they are in the kitchen.

But what I have observed is that I can see both of them coming down from the upstairs apartment on the back covered patio down to the ground level or house level downstairs and I can see both of them entering at the back patio glass door on camera to only. I know that there is a brief blind-spot always because you have to enter into that back patio door and eventually walk maybe 6 feet before you can be observed by camera in the kitchen but looks through the dining room towards that door. But what I have observed is the renter only is entering into the view of camera one and walks into the kitchen as if he’s had it for the laundry room with laundry clothes in hand.

But I never see any footage Afters at 12 second shot showing him and friend in the kitchen at a time when they normally used to be coming into the kitchen which is typically on a Monday morning.

So I’m wondering what I am seeing or not seeing. Could he be walking into the kitchen towards the laundry room and simply unplugging camera one? There by not being observed having a friend come into the kitchen which is okay but I want to see…

Could he be unplugging camera one for the duration of their time in the kitchen and then going back towards the laundry room after the friend has left and plug-in camera one back in and then he now walks out of the camera one viewing area and back out of the house picking up the friend in the blind-spot as they exit out the back door again?

How can one tell if someone is unplugging the camera for a duration of time and then plugging it back in later after they have finished being in that area unobserved and then exit out of the area while the camera is rebooting itself or starting back up?

Are there any user app detectable events that would indicate to me that the camera went off and came back on or the camera lost connectivity to power and or Internet and regained power in or internet at a later time?

A power and or Internet event entry would be nice to see in the timeline so that I can tell that all but he walked in later the camera reported that it had to start itself back up so I’ll know that there was a gap in power in or Internet?

Hello @FM3 and welcome to the community.

The only way I can think of that might start to lead you in the right direction is to install an SD card in the camera and set it for continuous recording, meaning it will constantly record. You could then go in and look and see if there are gaps in the recording when they go in and out. That would not tell you if it was powered off but it would tell you for some reason it stopped recording. If it always happens when they are around its a good indication they may be unplugging it.

Does this still work like this? the conversation was in 2019. I just got a camera and I´m trying to figure out what happens to the videos and events recorded by motion if the camera and mSD card are stolen? Will I still be able to check the videos in the app even if the removed/ejected the mSD from de camera?

Will I still be able to check the videos in the app even if the removed/ejected the mSD from de camera?