I know that many, including myself, use wyse cams as baby monitors. I wish there was a portable display that we could leave with babysitters as well as have on the nightstand at night. I know this would not be anything that would happen soon, but I think this is something that is missing to fully get into that market.

Must have features:
Volume control
turn off display option without killing audio

I use a tablet… But with the latest app 2.0 update when I open the wyzecam app, it keeps crashing on its own. Once they get it to work with the Google Assistant then you can use displays like the Google home hub to display the camera… Hopefully there will not at time limit of viewing the camera though.

I’d like to see a “picture frame”-type viewer product that could be placed on a shelf/fireplace mantle or something. The viewer would be configured to either receive a live feed of the camera(s) or simply be refreshed at certain intervals or even refreshed on event triggers.

I’m sure I can come up with something using third-party apps/hardware, but I’m sure a native Wyze-made product would be more slick & reliable.

You could just get a cheap tablet or a phone and use it as a viewer. It might work better than a wyze dedicated product.

Ya, I could - but because of bandwidth issues where I’d want to use this, I only want the frame to periodically fetch updates at given intervals. Plus, given their track record, I’m sure a Wyze product would be even cheaper than a “cheap tablet”

Seems like a lot of people want extended viewing of a camera within their home network as baby monitors or front door surveillance.

Perhaps Wyze could develop an inexpensive screen, similar to the 7" Fire tablet, to continuously show the stream from a camera. And possibly with an overlay to show alerts and notifications.

I’d like to see a screen with a couple of configurable buttons, Something like the Wink Relay (super cool, but poorly implemented and discontinued) . 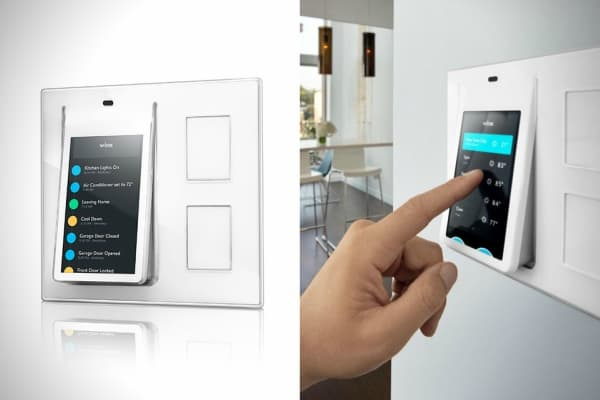 While an official product would be amazing, it’s such a niche request that I doubt we’ll ever see this on the Wyze roadmap. With this in mind, I still wanted to use a Wyze cam as a baby monitor, and have a dedicated monitor for it that was as easy to use as a normal baby monitor. Sure, you can use an android tablet and the official app, but I find it somewhat cumbersome to need to turn on the tablet, launch an app, and specifically connect to the camera’s feed when a traditional baby monitor just displays the camera feed by default. The following configuration method could be used to achieve something pretty close to a traditional baby monitor:

I won’t go into detail on how to set things up from here, because the video makes it pretty easy to setup and I think it’s pretty self explanatory otherwise. There’s also a lot of customization to this basic setup that could be made, like PoE, built in speaker, etc… Hopefully this helps someone at least get started in the right direction. Without Wyze RTSP firmware, this would be impossible, so huge thanks to them for supporting this very niche option, and hopefully they’ll continue to support it into the forseeable future. Too bad it’s not part of the main firmware as an advanced toggle that’s off by default.

Came on here to request the same thing! I’m glad others want this to happen also. They could sell it as a standalone add on to those that already have cameras or as a package that could be marketed as their own baby monitor. That way it wouldn’t just be ‘niche’. I have the echo show 8” and a 5” but these don’t work well for long-term viewing and I don’t want to put it on my nightstand. Also, they aren’t portable. Wyze could make one that let you view all your cameras or put it in a mode to only show the one you want to use as a baby monitor.

I just had a conversation with my friend who’s husband is in care facility. He is still mobile, but with his dementia, he doesn’t answer the phone often, nor be able to use computer etc. With COVID19 lockdown, she can’t even visit her husband at the care facility anymore, and I just thought this would be a great help for someone in the similar situation.

It can be used as baby camera, senior care or pet camera, and with the current ability of Wyze software, it can have audio detection that can send warning 10 sec video clip so user can check for baby crying etc.

I looked around a device like that, and I only find baby camera, or a software solution that the receiving end has to do some operation…

I think you should make a standalone monitor for your cameras with a touchscreen so I can see the output of your cameras, probably similar in size to an Alexa show 8/10", but dedicated to viewing cameras

We have been looking into the google nest so we can see all our cameras on a small tablet but the only issue we seem to find with the hub/nests out there is that they are stationary, you can move them but you have to unplug and move to a different room. If Wyze could make a hub that is portable so you don’t have to have one in every room of your house that has a rechargeable battery that would be amazing. And the prices of the nest/hubs are outrageous. Maybe a tablet type that has a base that you can place the tablet on when you move from room to room. Bases could be sold separately so you can just detach the tablet and move it to whatever room you are in.

I was thinking today how it would be nice if Wyze had their own device that plays back it’s own camera footage, like how the Google and Alexa Show thing does, but, of course, better. For one, it would be nice if it had a mode where it could solely be used to stream video feeds from the cameras. If the screen was big enough, maybe like 6 or 9 cameras at a time. That way you could leave it in a room (maybe have some accessory from Wyze or a third party where it could be encased and mounted somewhere so kids can’t move it). If they wanted to allow it to stream Youtube videos and stuff too, that’s fine, but I think the main purpose should be to have something to display their Wyzecams quickly and effectively, and with the ability for it to be locked into camera feed mode so kids can’t just start playing games on it or something.

Also, if someone wanted to, they should have the ability to go from watching camera feeds to controlling other Wyze products on the display.

Maybe there could also be a slot on the back for someone to charge their Wyze Band or something too.

Have a separate, dedicated monitor screen to allow 24-7 visibility so while at work we can check the security footage instantly instead of having to log in to the phone.

A simple screen that can show the feeds from the wyze cams would be awesome, Something maybe 7-10 inches (touch screen if possible).

If it could be plugged in and sit somewhere in the house it could act as a baby monitor or always on security monitor.

I currently have a Samsung galaxy tab mounted next to my front door. It’s a complicated messy process of connecting various different apps together to make it pull in my Ring feed when motion is detected and I’ve had it break before as updates are released to different pieces of software running it. It also occasionally works and occasionally doesn’t mainly due to my ring doorbell never opening a video feed. It would be great if there was a built-in setting in the app to make this work that could set a default Camera and/or doorbell to open the video for a specified amount of time and then go back to a dashboard.

Would be nice to ha e a dedicated wyze cam monitor, kinda like a tablet or even as big as a pc monitor, one that could even allow to view multiple cameras at once, google nest hub doesnt stay on or stream properly, and keeping your phone on all day runs down your battery

Considering how cheap tablets can be, walmart had their new 7" on sale for $28 last weekend, I’m sure it was a loss leader, it’s now back up to $50, and has the issues you’d expect for a tablet that cheap, small battery, only 2 MP camera, a screen that takes fingerprints like a phone from 10+ years ago.
But it shows that they are able to make one without having the amazon store guaranteed customers making up for the hardware losses.
Short battery life doesn’t matter if you plan on keeping it plugged in. Who cares about the camera if it’s sitting on a shelf. Fingerprints matter less if it’s not being used as a tablet with hundreds of touches a day.
The only issue is that the play store says it’s not compatible with the wyze app, but that should be solvable by someone within wyze by the next update if they decide they care about it. My plan is using it with tinycam anyway, showing 1-4 cameras 24/7.
Anyway, wyze should be able to put out a “portable display/monitor” relatively easily, in this price range, with software preinstalled, and probably things like automatic wake up and display camera on motion detection.

Yeah, i would think wyze could come up with a monitor that also supports cam pan functions as well as watching multiple cams at once, sucks to have to use your phone to constantly watch the cams, would be nice having a dedicated monitor

I would like to have a live feed of a single camera such as using it as a baby monitor. The cheapest solution is to purchase a kindle fire because of it’s price. However, I can’t even get the live feed to function on my LG V30 without it freezing after a few moments.

While I would love to see WYZE app on Amazon, I have a better solution for WYZE: Develop your own receiving screen! I am thinking like a digital picture frame screen to be used only for WYZE cameras.