Maybe…I have 4 V2s and I can hear all the sounds at the same time. Are you using iOS or android?

Have you tried resetting and resyncing all the cameras?

What actual version of the app are you using? what actual firmware versions are on the cameras?

My firmware is the newest update 4.36.9.139
And am using a iPhone and have V3. Mine were working for months and then this summer just stopped being able to hear both at the same time.

Thanks! I was replying to another poster who was staying they still had the multi sound working and asking that info.

I bet the fact that your using a Wyze app that’s from about 5 iterations ago has something to do with it.

I deleted device group, deleted cameras and added them all back from scratch.

I have one v2 cam pan with firmware 4.49.147 not in device group cause I don’t need to hear simultaneous sound like I do for the other three above.

There are more having problems so thinking it’s more widespread.

Can anyone with support speak to this functionality not working now? It was working on my v1 v2 and v3 cameras when in the same device group.

It working was proboly not an intended function of the app. The Support article states that only one audio source is to be heard when viewing grouped cameras. 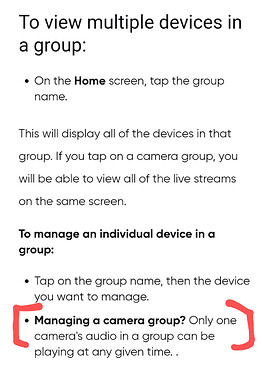 The best course of action is to vote and show support for this wishlist because it is apparent that many folks had this “feature” and enjoyed it. Showing support here will tell the engineers and devs that this is highly wanted (back).

Is this more a “pay” option to have or really a feature working but turned off?

Really curious since some say it’s still working for them.

Is this more a “pay” option to have or really a feature working but turned off?

The Support article states that currently only one audio stream from a camera group is current functionality in the current app version. Anything outside of that is an unintended result, or a bug, which in this case looks to be actually a favorable outcome and feature that folks really want.

Now the really old app version user that has this working, I don’t know if they are experiencing a bug and this is working or if multiple streams of audio from a camera group was an active feature on that version. I don’t think I’ve been allowed to listen to more than one stream in a group on old versions of the app, but I can’t recall.

Really curious since some say it’s still working for them.

The one person from a few replies above that says it still working for them is using a really old version of the app still.

That’s a true bummer. So how many votes does something need to get on the official wish list?

None, the unique idea has to be submitted and then get to approved. This thread is the wish list item for multiple audio streams while viewing cameras in a group.

Ability to hear audio from 2 or more cameras simultaneously

Since the app allows users to view multiple cameras at once, it would make sense for more than one camera to stream audio at the same time. This would be extremely useful for monitoring young children or pets in different areas without having to have your eyes constantly glued to the screen. This functionality works perfectly with WYZE cameras in Tinycam so it should be an easy upgrade.