So can we incorporate the motion sensor with the light bulb to turn on when someone enters the room?

Yes you can, if you build a shortcut for the bulb just use a contact sensor as the trigger

Can you use the motion sensor? Using a contact sensor means you have to open something, like a door. I usually don’t shut the door on the bedroom, so I want the light to just turn on when I walk in the room. Am I missing something? Thanks, Kerry

nevermind I figured it out. You have to tap the three dots in the upper right on the main page and then select ‘edit shortcuts’, then ‘create shortcut’ and you can make the action

I found this also works for the Android app. The earlier posts on this topic that say you have to use a contact sensor as the trigger may have been using an older version of the Wyze app. The motion sensor will work. Just set up a shortcut to turn the light on and a second to turn it off when the motion sensor clears. Kerry

Yes, both motion or contact sensors will work. You can actually trigger on just about anything, including camera motion, camera sound detection, smoke or CO alarm soundings, even camera person detection.

It goes off once the motion sensor clears, or as in the case of Person detection (which doesn’t have a ‘clear’ signal), the light has been on for 1 minute. Four shortcuts, which you can hide if you like.

Of course when you do something like this, you need to make sure your motion sensor and camera motion detection zone are positioned so you don’t get false triggers from the street, etc.

But how do you get it to shut off after 10 min?

If you are talking about turning off a light that has been triggered by a sensor you could set up another rule that would turn off light after being on for 10 minutes.

How exactly do you do that?

To turn a bulb or plug off after a specific amount of time, create a rule for that device.

Turn off if on for 10 minutes. 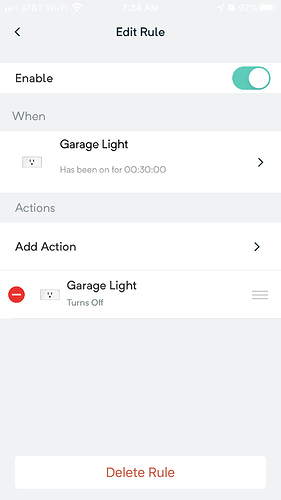 I do not have the option to do that

To learn all about Rules, Shortcuts, Schedules and Device Triggers, start with the article: Using Rules with the Wyze app. How do Rules work with the Wyze Sense? Rules help automate your Wyze Se...

I have two rooms like this. They work great