Linking video doorbell with Wyze bulb -- turns on but how to automatically turn off?

I have linked my Wyze video doorbell with my porch light (Wyze bulb) so it will turn on the bulb when a person is detected. That works, although I wish it worked faster. However, once turned on, the bulb just stays on forever, or all night anyway, which I don’t want. I can’t figure out how to have it turn off after a delay of some minutes, or when the doorbell no longer detects a person. I tried out a Rule that used the trigger of the bulb turning on: when the bulb has been on for 10 minutes, it triggers the action of turning the bulb off. Unfortunately, that rule did not work. Any ideas?

You may be able to do this via Alexa, triggering a wait routine at the same time the light goes on.

I setup the following Alexa Routines: Trigger if Person is detected, Action: Custom Action stating “Show Driveway”. Trigger if Person is detected, Actions: Wait for a minute (or some period of time), Custom Action “Go Home” So when the Driveway detects a person, My Alexa Show will stream the Video feed, the second Trigger will make sure the Video feed will stop 1 minute (or a selected period of time) from when it saw the person. By doing this, the show will not continue the feed for a long p…

Tried. But you can only have 1 custom action and it needs to be last. Unfortunately.

Unless they updated something.

So what’s the problem? Doesn’t your technique in the other thread directly apply to @Bammerman? Two trigger rules, one with a wait.

So if you set it for has been clear for 5 minutes, it would work like this:
Person comes to the door, light turns on. Person walks away, 5 minutes later light shuts off.

If someone else triggers motion within that 5 minute cooldown, it resets the counter.

There may be a way to do this another way, but I haven’t figured out how yet. I wanted to set up my office to automatically turn on when my cam detects a person, then turn off when it hasn’t detected a person for X amount of time (or motion on the cam has been clear for x amount of time), but there are no such options in the Wyze rules yet. I wish they would add them. It should be really simple for some of the cams, like the WCO since it works just like a motion sensor with PIR activation/clearing already.

I do have a Wyze motion sensor and thought of doing something along the lines of your suggestion here, but it seems to me that the Wyze video doorbell, which has both motion- and person-sensing capability, ought to be smart enough to turn a porch light/Wyze bulb on, pause for a while, and then turn it off. Or the Wyze rules ought to be capable of that! I also looked at ifttt, but don’t see anything there in the Wyze services that would do the job.

Sorry for the delay, been busy today. - @Customer and @Bammerman …

Yes, the 2 routines should work for that as well. The other option, which I did using all Wyze products for my lights was as follows:

here is an example:

You can also set the desired Time for this to Run.

If you set it up with a time associated to it, I would not set the Rules to run at the top of the hour. Sounds weird, I know. But I have done a lot of testing and found that, at least, for scheduled rules I had problems when I wanted them to Run at 10pm. I actually backed it off 1 minute and it ran fine.

If you put images of your actual rules, I would be glad to see if I notice something.

Thanks for the suggestion – this is what I tried the first time, but it did not work. I can attempt it again. One difference is that my trigger was detection of a person by the video doorbell, not by a camera. You might assume, as I did, that Wyze rules would treat them both the same because, of course, the doorbell is “principally” a camera. But it might not be the same, and in fact the software doesn’t seem to recognize the doorbell as “a camera.” In any event, I’ll try it again. In the meantime, I solved the problem at least temporarily by putting a motion sensor above the door with the doorbell and the porch light. So someone approaches the front door, the motion detector sees them and turns on the light, which is instructed to turn off 10 minutes later. And meanwhile the vide doorbell is doing its thing too. Is that redundant, or what?

Glad you got it working. I don’t have a doorbell yet, waiting for them to become available.

You are also correct with my assumption that the detection would be similar.

When I get a doorbell will need to check as I have one light which goes on when the garage is open. Ordered the colored bulbs so that I can set a color for garage and another for person.

Will report back when I can verify.

In the meantime, glad you have a solution for now.

So far I like the video doorbell and it seems to be working just fine. The only slightly weird thing I’ve discovered is that when I Chromecast it to my TV set, the picture stream turns 90 degrees sideways. That’s what you’re looking at here. 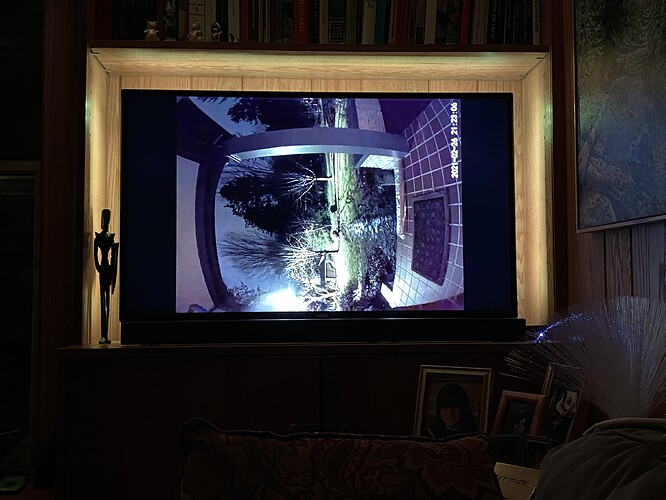 Interesting. I was wondering what it looked like as I saw comments about this on the Alexa Show. But even with it tilted, that is a great picture with minimal distortion. Cannot wait to get mine. Wish they would send an email saying we can order.