Hello People
Below in pictures is a clean and straightforward way to hide a contact sensor if you have a wooden door.
All you need is a drill motor and a steel scale. some scraps of wood and oil. No chisel or hammer.
By drilling a series of holes in a symmetrical pattern a nice slot can be created for the sender unit. A single hole is needed for the magnet part. 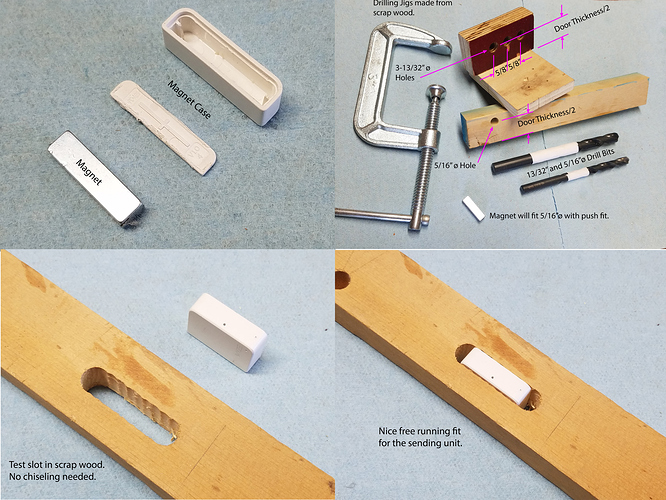 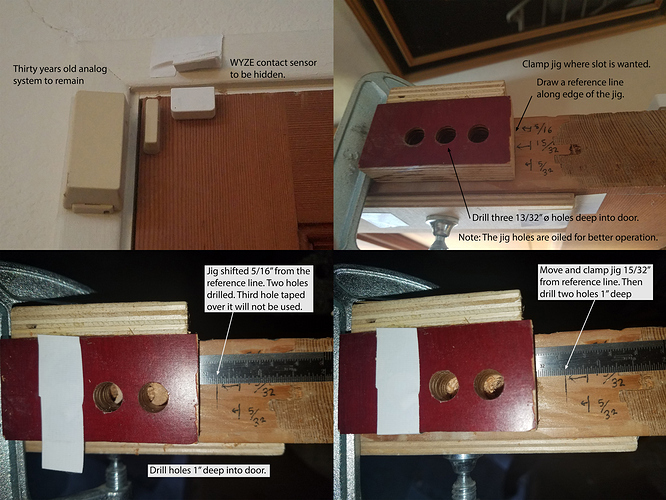 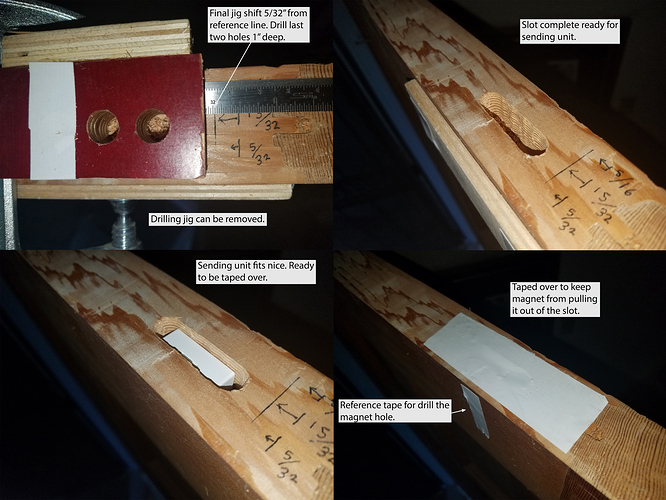 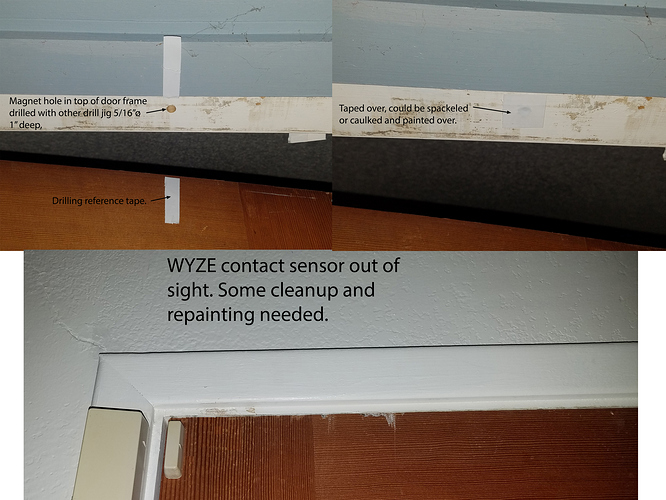 Nice I initially were with these which is just one hole that you have to drill and that’s it.

This item is unavailable - Etsy 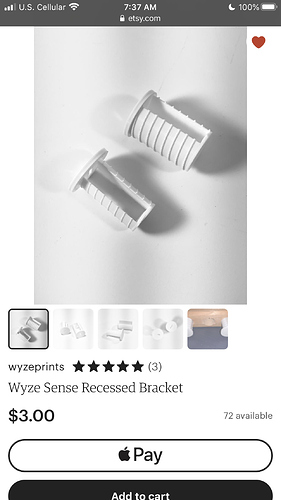 Then I updated to these just because I like the look better. 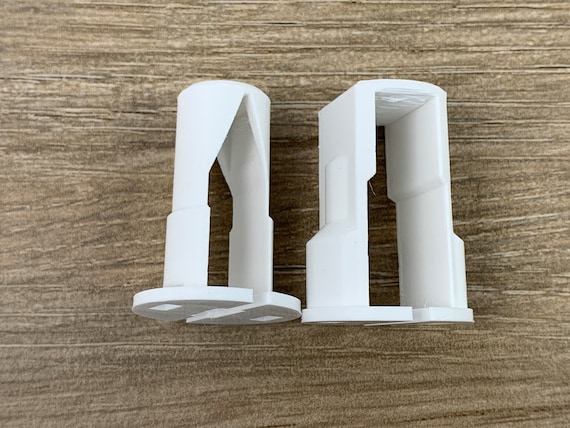 This Gadgets item by ideaxtruder has 29 favorites from Etsy shoppers. Ships from Washington, UT. Listed on Jul 2, 2022 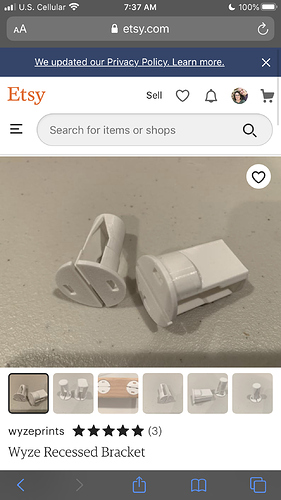 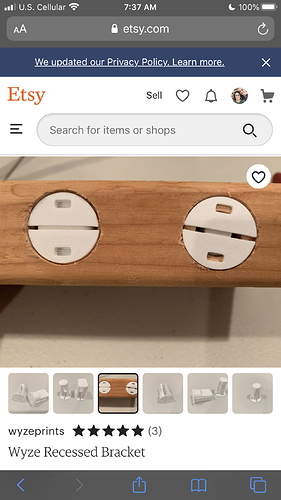 Very nicely done. I did almost the same thing for my first one. I then shared it with a few people that said that is cool but I can’t do that. So i decided I needed to come up with something that more people were comfortable with doing themselves. That is when I started on my recessed bracket. I went through 3 version but eventually ended on this. It is posted above but the video helps with understanding it

The top method just looks way too complicated to me. Drilling a round hole with a regular drill bit is so much easier.

Yes, the printed inserts are clean and nice looking. But it appears that two holes are needed: a shallow flange hole and a smaller and deeper body hole. It appears that to get the best results a drilling guide should be used, otherwise and an out-of-square hole will not allow the flanged top to seat flush with the surface. An out-of-square body hole on a thin door presents potential damage to the door from splintering or daylighting its surface. A moderately out-of-square hole wouldn’t matter if it was located at the top of the door where it would be out of sight.
Although the slot method I showed required three specific shifts (values are shown in the picture) of the drilling template, it only requires one size drill bit and a rather small one at that. It is more fault-tolerant to out-of-square drilling. Minimal material is removed to make the receiving slot. Retrieving the sending unit only requires sticking a piece of tape to it.

As for the magnet, drill a hole just large enough and deep enough to push it in, if the case is removed the hole can be smaller.

Some day I may get a 3D printer to make unique and useful things.

I put mine in the top of the door opposite the end of the hinge. Getting them square is not really an issue. I used a spade bit to get my center hole lined up and to go just deep enough so that it sits flush. Now I know where my center hole is to use my other drill bit to drill the deeper hole. And if the hole happens to be just a shade too big which hasn’t been a problem you can always wrap plumbers tape around it if you have the screw type and the other type automatically just open up to the size of the hole. It is quite a simple installation

I like yours but I feel these are easier to cover up in the future if need be. And like I said they are very simple installation.

One way I thought of hiding a side-of-door installation is to print (on paper) a small label that says something like “Fire Rated 1.5 H or a fake bar code”. For a top-of-door installation a simpler no-flange, no-threads, no friction shimming and only one size hole. No cover tape either. But I would tape or patch over the magnet above in the door frame.
What type of plastic do you use for the sensors?

@lachlan6 Make them and I just buy them from him. So he would have to tell you. I’m sure he’ll see this and answer you back. He has a Etsy shop. And he’s really easy to deal with and just a real cool guy. And the ones in the top have stayed. I haven’t had to do anything to keep them from dropping out the main thing is just making sure you don’t drill the holes too big.

They are printed in PLA. As for the install process. The threaded ones need to been pretty close to the perfect size hole which are standardized sizes. As for my latest brackets that compress and wedge themselves. I haven’t ever had a problem with them just fitting in the 7/8 inch and 5/8 inch holes. By starting with the 1 inch bit you get a nice recess for the head and and the next size bit just gets centered there easily. If you watch the video I do go over the install process.

How do you replace the battery?

The big part just pulls apart and there’s a battery in there. I just replaced one this morning you’ll see like a little notch on the side just pull it apart

I mean after you bury it in the door frame.

If you used the drilled in slot method I presented you would pull up the cover tape and up would come the sender unit. Then replace the battery. No tools required.

Does anyone have a good method for removing the foam adhesive from the back of the sensors/magnets? I bought some of the plastic mounting brackets but when I peel the foam it leaves a really nasty bit of the stuff on the units.

I just start it out and go slow. Also it doesn’t have to be completely removed just enough to make it fit. Maybe some lemon oil or this https://amzn.to/3bbNM0Z although i haven’t tried either.

Also a razor blade does a nice job if you’re just very careful and have it at the right angle you can slide a lot of that off of there. But like you said it doesn’t all have to be off of there and if it’s a little snug in the plastic that’s actually may be a little bit better so that it doesn’t just slide out

Surprisingly hand lotion is great for removing adhesive residue. I use it to remove stuck on price tags from glass or plastic. It works for removing ink on your hands as well. Keep applying it until the residue is completely gone. Then dry with paper towels.