I’m at the same major revision level as of 12/20. Mine is an HD 8 10th Generation that I purchased directly from Amazon a few months ago.

I even checked the Amazon App Store on the device and searched with no relevant results. It was disturbing, however, that in doing so I suddenly got a message that Zoom Cloud Meetings had failed to install - I did not request that app nor was I searching for it.

I have been scouring the web even Amazon’s support pages

As mentioned, my tablet did an upgrade and restarted and poof there is was, and I haven’t touched this device since maybe late September and I purchased it in March.

I renamed the post accordingly to Fire Tablet Device Dashboard. 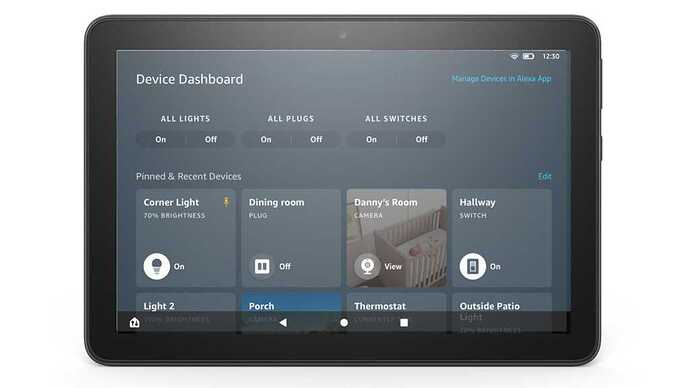 A software update rolling out today brings a new Device Dashboard which lets you turn smart lights and plugs on and off quicker than asking Alexa.

And of course as I am testing it I forgot there is an issue with Amazon devices connecting to WYZE cameras at the moment. My V2, V3 and Pan Cams have been spotty with connecting over my Amazon devices and the WCO cameras just get a “not sure what went wrong error when trying to connect”

But I can control my WYZE thermostats directly from the tile…

Ah, never mind. I followed your AFTV link to learn I just needed to click the icon on the lower left. I hadn’t even noticed it there before! I mostly use this for TinyCam Pro full screen.

Might have also helped I’d I paid attention to your circled screenshot.

Yea, it does not show multi cameras streaming at the same time but a tile to “bring it up” but… I can see my WYZE Plugs and other random smart plugs, WYZE Bulbs, WYZE Cameras, Martin and Jerry Switches and other IoT devices all on the device dashboard.

I relaunched TinyCam Pro and I’m not looking back.

Thanks in any case for the info.

I have had little luck with TinyCam and I have the pro version. They add just fine, work for as second then bomb out on me.

I don’t have that on m fire tablet

My old Fire Tablet (generation 7) is going to be retired. I want to know if people are able to view a new Fire Tablet (along with Device Dashboard) to monitor all the Wyze cams. I’ve 4 outdoor cams, 1 v2 cam and 1 pan camera. Any feedback would be greatly appreciated as I intend to purchase a new tablet. I’m trying to decide if I should get a Fire Tablet or a regular Android Tablet. If Fire Tablet can work well and constantly show at least one Wyze cams (without going to sleep), I’ll go with the Fire Tablet.

Yes. I tweaked it a bit to keep it awake and sideload apps and disable lockscreen etc. but my Fire HD8 works fine as an always-on console using either the Wyze app or TinyCam or TinyCam Pro. I even have it serving streams to browsers with TinyCam’s web server feature, and saving detection clips to local “DVR” storage, etc.

Optional "show mode* (it can act like an Echo Show) is a nice bonus but I don’t use it. Real Android functions are much more interesting.

Hi “Customer”. Thank you for the feedback! Are you saying the following?

Thank you for the guidance! I assume that continuous streaming will work on a regular Android Tablet. I think I’ll go with that for now. Maybe when Wyze team makes it a native app, I’ll consider a Fire tablet in the future

Install the “Fully” Kiosk Browser on your fire tablet. the instructions are available on sites that describe how to install ActionTiles. The Fully Kiosk Browser has settings that will keep your tablet from going to sleep or be activated by motion sensors, etc.

Did you ever, even briefly, get your Wyze V3 to connect to a Fire Tablet? I have a 2FA prompt I just can not get past.

I like tinyCam for many reasons, including multiple views but it does not work (to my knowledge) with the Wyze Cam V3 because of 2FA. I would settle for the Wyze app but there isn’t one for the Fire tablet as far as I know as of March 2021. Unfortunately I bought four Fire Tablets and have them mounted on the wall as monitors. So now I can not buy V3’s because it does not work.

The Wyze app sideloads easily on the Fire tablets. My HD8 works fine with it.

Also I’m pretty sure others are using TinyCam with the V3s.

Using Device Dashboard? Yes. They pull up just fine after the 8-10 second connect time. I do not have 2FA turned on.

But… I believe the 2FA is going to block the 3rd party app from viewing cameras in all cases? I am not 100% sure on that.

And I don’t even have 2FA turned on to test and still prompts but only on V3. (tinyCam and Fire Tablet). I did get it to show on the new devices dashboard though!

How many V3s do you have? That’s weird…

I can pull my V3s up on all Fire Tablets (Device Dashboard), Firesticks, Fire Cube (FireTV), and the 3 different versions of Echo Shows I have.

TinyCam as well but I don’t use TinyCam much now.

Not on standard Fire tablets with V3, I doubt. But I would love to be wrong. It may be time to try the side load stuff. (Need to find instructions…)