I currently have a home network with nearly 100 devices and run a custom built home automation platform (IE: lots of traffic). I recently have noticed that my few Wyze devices are sending an extraordinary amount of DNS queries. Wyze is sending DNS queries every minute (sometimes multiple times a minute).

Wyze DNS queries are clogging up my logs and causing unnecessary traffic on my network. Even though I use an enterprise grade firewall and switch, I do my best to minimize traffic in order to ensure everything is running optimal. This is more of a nuisance than a problematic issue. However, I really wish it would be addressed. I only have a handful of Wyze devices running (five at the moment).

I have read other posts in the past where people complained and it was mentioned that the excessive DNS queries was a bug that would be addressed in a future update. However, some of those posts were from a long time ago. 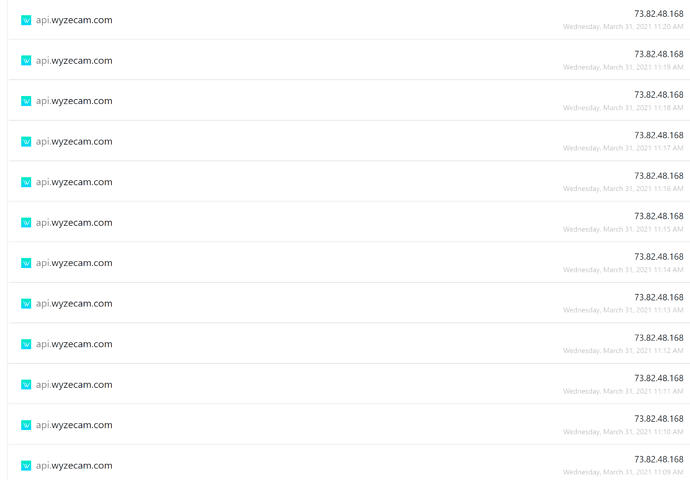 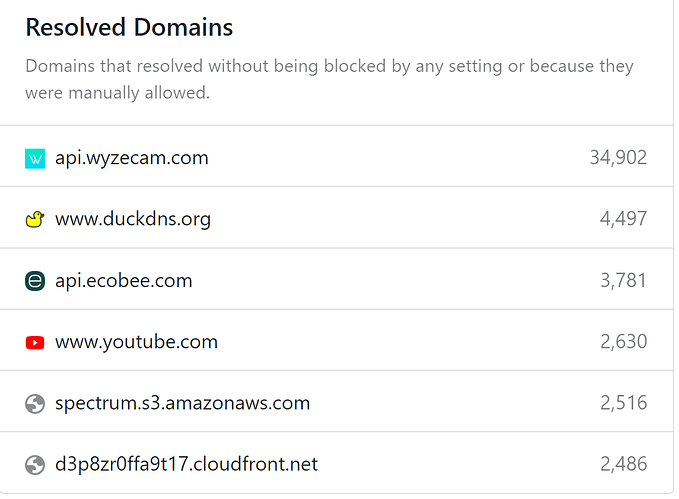 How many Wyze devices (“a few”) are involved?

There are a few current threads about this problem. The V3 is particularly bad.

Two cameras, two door sensors, and a single bulb. I own additional devices, but they are not connected at this time.

This is unfortunate if this is the case. I’ve been with Wyze since the beginning and have slowly watched them drift away. I am at a point where I am moving towards other solutions. It’s frustrating because I want them to succeed. Their philosophy of bringing smart cameras and devices to market without ridiculous markup has been awesome. However, their lack of any support for allowing local offline use of their devices and reliability issues has been frustrating.

I own multiple Wyze bulbs and all of them but one quit connecting to their app. I went through the process to warranty exchange one. However, I dont want to have to keep doing this every time. I would rather move to another solution that will be more reliable. The cameras have been rock solid except for one critical issue that has never been resolved. Any time the power goes out the cameras do not come back up properly. I have had the power go out while traveling and completely lost the ability to monitor my home on multiple occasions.

To sum things up, I am left with cameras that dont work if the power goes out, bulbs that permanently quit connecting to the app, Wyze excessively performing thousands of DNS queries (clogging up my logs and potentially creating a security issue), and no local offline home automation support.

I do believe Wyze is still one of the good guys in the industry compared to others. However, I wish that they would focus less on creating more products and more on increasing overall quality (and features) of what they currently have on the market.

I’m with you. The v2 cams (and surprisingly, Doorbell) don’t suck much but future spending is going with HomeKit companies since there is a bare level of competence required.

I want to believe.

Just since I came on the forum last year we’ve lost some really valuable regular contributors who apparently left for other pastures. @rbruceporter and @sodcam and @desertshores and @kjay come to mind but I’m sure I’m forgetting some others. Several announced it clearly.

I’m sticking around because I have two v2’s, a doorbell, and three remaining v1 sense products.

They’re hiring product managers (lots) and I’m tempted to apply just to fix this as that’s my vocation. The fact that they are trying to herd cats gives me hope.

I know they ignore these fora but if they’d listen to their customers instead of their investors, they might have a shot.

What I think is these are Amazon TechBros™ and the hubris is unchecked.

I’m still here! Just haven’t been able to get my hands on new products with the border still closed and the limited availability in Canada.

A lot of posts are about new products I don’t have and there havent been any major functionality changes to the ones I do have.

Hey good to see you.

Thanks! Good to see you are still around as well! I’ve been pretty scarce ever since people started getting the thermostat and the forum was flooded with wiring questions that I had no stake in

I can relate to that. I kind of wish we could have a blacklist option… Like, if I am subscribed to Ask the community, let me blacklist the words or labels/tags for thermostat or headphones or whatever else I don’t have and then don’t send me alerts for posts related to those product tags or something. They’re still valuable for some people, just like you said, others have no stake in it.

There are Wyze products you don’t have?

That feature would be nice. The last wyze product I had early was the outdoor cam. I managed to get a V3 but that was fairly late compared to the pre-orders. Since then people have gotten/been able to order a bunch of new products: thermostat, vacuum, hand vac, spotlight, sprinkler, watch, home monitoring, sense v2, color bulbs and car. I even get notifications of hardware tests that I cant apply for since I no longer have access to my US address. kind of depressing seeing all the stuff I’m missing out on lol…

Heh, sadly, yes, there are a few products I’ve passed on (not gotten). Though the question was rhetorical, the ones I’ve skipped are:

I have basically EVERYTHING else in every variation

Where is the threshold for “Fanboy”? If I give criticisms too, am I excluded?

Anyway, I don’t like excessive DNS queries either. My router is already overloaded with limited simultaneous used channels, plus Xfinity has monthly bandwidth limits. Granted little pings are insignificant alone, but a lot can add up to issues when lots of things are fighting for use of limited channels simultaneously.

I come from the future, and this seems to still be an issue. The red bars at the bottom are the wyze devices in my network having fun poking the dns servers.

Those frequent DNS inquiries reminds me of a little kid asking, “Are we there yet?”.

OMG I love that term “Amazon TechBros” and it fits so perfectly for the atmosphere in this area. I too am starting to feel like they are not spending the time on current products they should, many still don’t even have the functionality they were sold under yet we are getting a LED strip in a month. I’m a sucker and still bought one even though I am beyond flush with RGB/RGBIC strips. I hope the video they put out this morning holds true for their direction because I can’t afford to jump yet. I have over 10 Cams going at any given time, multiple v1 and v2 sense products in use, each vaccum, each audio item, etc.

The biggest things I would like to see would be those darn 3 in 1 temp sensors touted with the thermastat, orignally stated early this year now it says this year but even that I’m skeptical now, Some big work on the Wyze watch - this thing is beautiful but I have no reason to look at it really. Best use I get out of it is when I set my 30min lunch timer which is sad, and then getting the robot vaccum hooked up with Alexa - that one I did see was in beta recently so hoping that means we will get it soon because automating that someb is what would be the ticket.