The typical “DC direct” (USB output) solutions I find cost about as much or more as the Wyze Cam itself, or are unenclosed solutions meant for use with a Raspberry Pi. While doing my occasional searches for “USB UPS” and “DC UPS”, I came across this little device:
https://www.amazon.com/OWSOO-2600mAh-Security-Rechargeable-Batteries/dp/B096MSHX1W

No reviews yet, but two of the images in the listing show it being used with security cameras. I believe I’ll order one to try, but I’m mentioning it here in the event anyone else is interested and would rather perform their own testing.

This Wyze article indicates a 10,000 mAh power bank would typically power a Wyze Cam for 16 hours, so the 2600 mAh battery of this one should be good for about 4 hours.

Looks a little sketchy and $15 isn’t all that cheap but good luck and let us know how well it works / cuts over between modes.

Looking at the photo of the Micro-USB plug, it may not fit into the recess of the Wyze camera without some surgery. I wish it had a USB-A female rather than the Micro-USB plug on the outlet end.
Let us know how well it works out.

If you use PoE, you can always get a standard UPS (the CyberPower’s at Costco for $99 are good) and run the PoE switch through that.

I have my network (modem+router+firewall+security cameras) on one, and my home server on another. That way in a power outage, cameras keep rolling.

If you’ve done pure wireless / power at the source, than ya, it’s going to be a tad difficult. You can’t just use any typical USB power bank as it has to have the switching capability (capacitors + logic) so you’re not constantly drawing on the Lithium Ion batteries (they’ll die quickly if you’re constantly cycling them). A proper design would have enough capacitors to hold power for the brief few milliseconds it takes for the power to switch to battery.

If I had Ethernet running to the camera location, I could just use a PoE camera like one from Reolink.

A lot of consumer UPS units don’t seem to have the most efficient inverters. The direct DC UPS hooked to my router greatly outlasts the APC UPS attached to my cable modem (which has an internal power supply, so no DC jack for input). That said, despite being of similar size, I wouldn’t be surprised if the direct DC had a larger battery, due to not having any internal volume taken up by an inverter and outlets. Even with that taken into account, however, it is still clear it is more efficient as the runtime difference is dramatic.

Apparently this item ships from overseas, as the delivery estimate is July 15 - August 4, so it will be some time before I can report back.

Having received it, I can confirm the micro USB end fits into the Wyze Cam v2 with no issue at all.

I share your wish that the device had a USB-A port rather than a captive micro USB cable. The entire cable assembly is rather short (less than 3 feet).

As a follow-up after my first power failure (lasting only about an hour), I can attest the device does what it is supposed to, but the design has some shortcomings.

The first is that it is a lump in the middle of a short (less than 3 ft.) USB-A to micro USB cable. It would be a lot more useful if it terminated in a female USB-A, so that it simply acted as an extension to the existing cable.

It also has an indicator LED inside the white casing. It shown red when I first plugged it in (I assume indicating charging), and green ever since. It is bright enough it would be an issue where one might want total darkness (such as in a bedroom), or at least not something bright enough it could function as a nightlight. 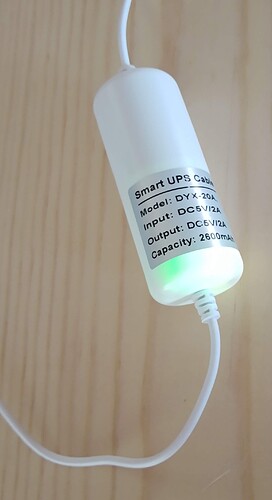 The device is no longer sold on Amazon, but can be found on AliExpress (as well as the same design item from another seller for slightly more that advertises a 3200mAh capacity).