just read an article on a supply chain component vulnerability. Anyone know if this component is used on devices or apps ? Millions of Connected Cameras Open to Eavesdropping | Threatpost.

Sure sounds like it! Wyze uses ThroughTek as its P2P service for all of our cameras. This is relevant news, thanks.

The ThroughTek component at issue is its peer-to-peer (P2P) software development kit (SDK), which has been installed in several million connected devices, according to the supplier. It’s used to provide remote access to audio and video streams over the internet.

Nozomi Networks, which discovered the bug, noted that the way P2P works is based on three architectural aspects:

“A peculiarity of P2P SDKs…is that OEMs are not just licensing a P2P software library,” analysts at Nozomi Networks pointed out, in a Tuesday posting. “They also receive infrastructure services (the offsite P2P server) for authenticating clients and servers and handling the audio/video stream.”

In analyzing the specific client implementation for ThroughTek’s P2P platform and the network traffic generated by a Windows client connecting to the NVR through P2P, Nozomi researchers found that the data transferred between the local device and ThroughTek servers lacked a secure key exchange, relying instead on an obfuscation scheme based on a fixed key.

“After setting a few breakpoints in the right spots, we managed to identify interesting code where the network’s packet payload is de-obfuscated,” according to Nozomi’s writeup. “Since this traffic traverses the internet, an attacker that is able to access it can reconstruct the audio/video stream.”

Strange we haven’t heard more about this as it applies to Wyze. It was assigned the identifier ICSA-21-166-01 by the US government.

I came across this article…

you should ask this at the upcoming CamPlus session.

You might want to change the Topic title to:

or such like. Will definitely get more traffic and possibly staff attention.

(Click the pencil icon at the end of the current title to edit it.)

I flagged it yesterday for Wyze staff to answer if this affects our Wyze cams.

Someone is going to see all my raccoon videos

Still no reply from Wyze Staff, this is concerning.
If we are not affected they would have chimed in by now.

There was a post about a very serious security concern but the title needed more clarity to be noticed.

Wonder when Wyze will comment on this security issue?

ANY data transferred over the internet is subject to hacking.

True but that’s like saying any lock can be broken or any person defeated or any food overeaten. This is about a specific identified vulnerability that may or may not apply to us Wyze users.

And Wyze staff has failed to even comment on this subject, and it was flagged for their attention…
Just Crickets…

In the past, when you’ve flagged a topic for staff attention have you received either a public or personal response? I haven’t done it for years but I often received a private message, I think. 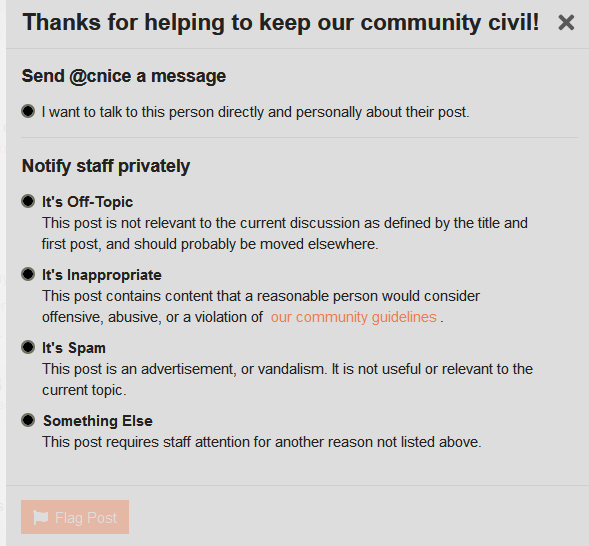 FYI, as discussed in another topic:

I do think it would be prudent for someone from Wyze to at least reassure people that they are aware of the release and provide some information or plans they’ve taken to remain secure. I certainly don’t disagree with that. If I worked for or consulted with Wyze, I would have recommended this.

Wyze may not want to talk about the specifics of what TUTK SDK version and options they have enabled or not…but since they’ve been doing so many AMA’s lately, if someone reminds me, I have no problem asking them in the next AMA. They answered at least half a dozen of my questions in the last AMA, even about stuff like Hualai. I’ll happily ask them about TUTK and WebRTC in the next one if you or someone will PM or callsign a reminder to me right around that time to remind me.

In the past back when they were only a camera producer only, V1. V2, and Pan Cam they were more responsive and addressed issues that were directed to Wyze Staff.

Since they went crazy on new products releases they do seem far less responsive to questions/issues directed to Wyze Staff. Guess they are to busy working on the Wyze WiFi-Bluetooth Toilet to answer us on a Critical Security Concern.

I throw in valuable factoid keying off single word:

I don’t know what Wyze can do about that, but there it is.

I now have sent a DM to WyzeGwendolyn hopefully she will answer back on this, fingers crossed… 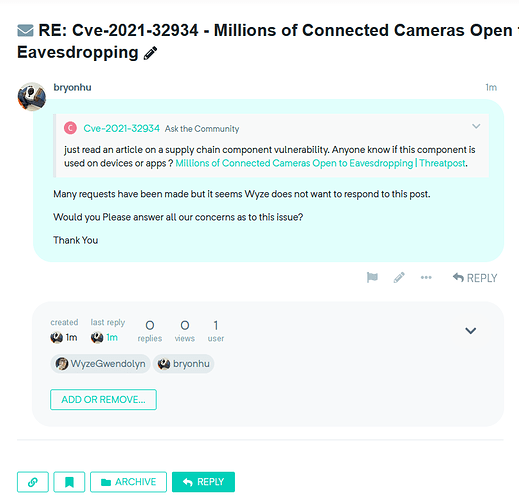 Great, hope that helps, and hope it’s nothing in the end.

Apparently NOT, Question was posed in the WyzeGwendolyn post Wyze App 2.23 and Wyze Sense Hub 4.32.4.295 Released - 8/4/21 And she replied to other question about Geo-Location.

But Just the Same CRICKETS in response to this.