Critical alert When Armed and triggered?

SO- when it’s armed and a sensor is triggered (door opens) and the countdown begins-
It makes sense that I would get a critical alert RIGHT THEN if the system is armed and then triggered so I can immediately disarm it if I know it’s a false alarm/ i.e. my kids or something.

@cswestbrook Welcome to the community!

You can accomplish an immediate alert by setting the entry time to “0”. Actually, I prefer this myself instead of a 30 second delay on entry. If a door or window is opened, I want the alarm to go off so Noonlight can be notified promptly. I use my phone to arm/disarm the system to avoid triggering the alarm when entering and leaving. 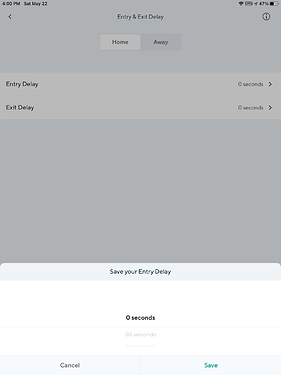 There is an existing #wishlist topic similar to your idea that you may want to check out here.

It would be nice if the Sense Hub, made a noise when one of the sensors associated with the sense hub was opened. I have 3 smaller kids, and are able to unlock and open doors on their own, we had an old ADT alarm system that would chime or talk when the doors were opened. It would be nice to have this feature here, but obviously one that could be turned off, since not everyone needs or wants this. Mod Note: Title Edited to Enhance Search Clarity.