Captured this at my parents place. The camera was placed behind a single pane window. Behind the camera setup is a closed venetian blinds that covers the entire window. The location is in a storage room, which is seldomly used and with all lights turned off.

This was captured at 2:52 AM. Everyone was asleep in the household. Also notice the sound that was captured. The sound is unexplained.

Yikes! All lights were turned off???

Yes, the camera where the room was placed was pitch dark, and there’s a blind behind the camera setup. Attached is a photo of the setup. Blinds were closed when this was recorded.

IR was off because it was behind glass. The lumination is only from the outside light. 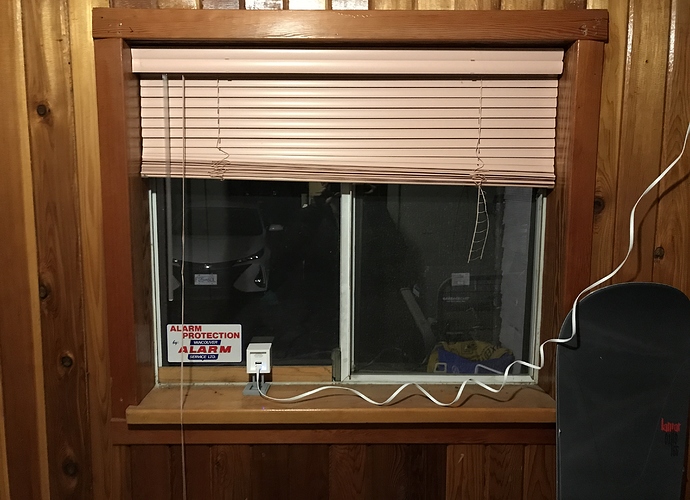 I figured out what and who they are: Fatso, Stinkie and Stretch from Casper the friendly ghost!

Looks like tiny bugs on the window to me, out of focus because of their proximity to the camera vs the focal point. Would be creepy to see at first!

Do you happen to have more of these or longer video of that night? We have been dealing with a similar thing for two years with a lot of other things also. Let me know if you have had any more of these and I would love to share with you (via e-mail) what all we have found out and done to try and figure these out.

I had a very dramatic thing happen on my Wyze today which leads me to seeing if anyone else has had the same experience. I just got a dog and had my camera hooked up in the living room to keep an eye on him. At 8:30 I saw two people in my home from a recoding taken at 6:30 and anytime they would move they would dissapear with lines behind them and reappear along with unexplainable noises and static and my dog was following them barking and growling…I shrugged it off to bad wifi I called the cops and rushed home immediately. When I got home I went to pull the video up and when I clicked on the 6:30 video it’s just my dog sleeping on the couch and the video doesnt exist. I could tell you what they were doing what they were wearing and I remember watching how long the video was. I’m not crazy either. I’m terrified right now tbh because I don’t know what it was because the video doesn’t exist and I watched the video while I was driving so I know it wasn’t a dream but I litterally feel like I’m losing my mind. Cops came did a report labeled it trespassing and left. Before the event when I was leaving that night I did pull up the cam and watched how my dog reacted to me leaving. I did have orbs going upward and did not have a fan on in the immediate area along with what sounded like a cb radio and someone talking sound. Same house I have experienced some less tramatic things and my ex girlfriend was present during them. Like a loud two fingered whistle like right behind us and my closet becoming disassembled after seeing shadows on our door window along with a few other things. If anyone has experienced a vision like this id like to know. Thank you

My girl and I have experienced crazy spirit world [stuff] where we used to live until the place mysteriously caught fire and was destroyed the day after we had a Native American friend nd cleanse it for us.He cleansed it for us because if all the spirit world crap happening.r cat would interact with whatever was thete too and things were crazy and very much really happening. Other friends experienced hings too like stuff flying off counter and the walls that t had no explanations and other stuff too o. We didn’t have a WYZE CAM back then and actually did record lots of crazy stuff that our cameras picked up but it all was lost in the fire. From what I’ve experienced and am still currently experiencing with my WYZE CAM, I doubt it would have been able to pick up anything. I AM VERY MUCH NOT pleased with the way that it has worked at all! Be careful what udo or say to the spirit world, you don’t want to [tick] it off line we did and have it destroy all your stuff… We have been on edge since and are trippin bg now because iwe are both seeing stuff again and strange things are happening and things are disappearing and reaper ing later with no reason that mashes any sense… We don’t want anymore spirit world…