Can you omit ony your cameras in Alexa

I want to use Alexa with my Wyze plugs but I do not want Amazon to have access to my cameras. Is there a way to do this?

Technically, no, since you’ve linked the Skill with your Wyze credentials. The workaround would be using a second Wyze account for the cameras. Personally I wouldn’t be that paranoid.

In the Alexa App, you can remove (delete) devices individually.

Just curious since I haven’t tried this, do they stay deleted or do they eventually get added back? I suspect if you have to unlink and relink the Wyze function the cameras will come back?

Update: apparently they will. You can, however, disable them. 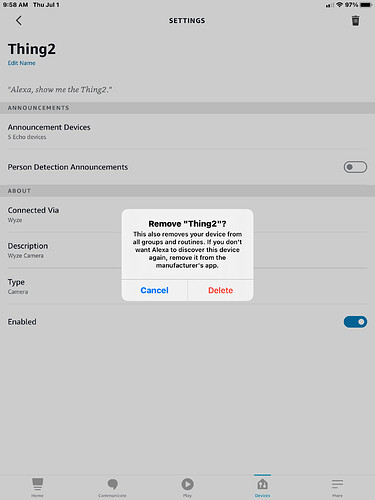 Of course Amazon very much still has “access to his cameras” even after deleting, so long as the skill is enabled.

True. Another option is to disable the cameras within the Alexa app. There is a toggle switch at the bottom of the screen for that.

Alexa will not automatically add it back. After I added my V3, Alexa notified me it discovered the new device. I still had to approve adding it.

I have not experimented with this though.

Interesting but not really the point, since “Amazon” still has full access to the cameras, which I think was the question.

I have Ring, Treatlife, Guardion and Wyze. If I add a device to any of these, the App integration with Alexa triggers the pop up asking me to add the new device.

The key here is full access is already granted to the provider. Their App triggers Alexa to suggest adding the new device.

The full access is via the App, not Alexa.

When you install the skill you log in to Wyze to authenticate. Amazon then has access to your entire Wyze account, period, forever, until you uninstall the skill. It doesn’t matter if cameras are “removed” at the Alexa side. They can be rediscovered and accessed at any time. There is no per device control, it’s all or nothing so far as I understand. Amazon of course control that entirely and could “leverage” that any time they choose to regain access to the cameras, theoretically.

I was mistaken when I said they had your Wyze credentials though.

Incorrect When the skill is installed, authenticated, and enabled then Amazon can interact with the skill.

This is like every other skill I have linked to Alexa.

AWS hosts too many servers and services for anyone to worry about skills. Wyze uses AWS. Salesforce is partnered with them. Then there is SharePoint and many MS services including One Drive.

Want to add Google cloud to this including Chrome?

Thank you for the correction. I see that, smaller Alexa hosted skills aside, commercial skills are typically hosted by the developer. But so what? The Wyze skill you link to Alexa still has access to ALL of your Wyze products and services, whether or not you choose to expose them in the Alexa app. You’ve still authenticated your skill with your Wyze credentials. So Amazon can still, theoretically, exercise that privilege at any time to view any of your cameras they choose. Is that not so?

Do I worry about this? Hell no. (My first response above was, " Personally I wouldn’t be that paranoid."). Just trying to provide (and gather) accurate info. As to the rest of the post, I only use Salesforce, SharePoint, OneDrive, and Chrome when needed at work, and I don’t use Google search. Certainly none of that is linked to my personal Amazon accounts. Not sure of your point there.

I did not mean to come across as correcting you or anyone else. I am also open to making sure I am correct

First, I am a Salesforce Developer and Release Lead. My point was that the Amazon cloud (AWS) is trusted, along with Microsoft cloud. We have much more sensitive files on their clouds than anywhere else. We typically connect to MS servers to transmit secure data.

I do not agree that Amazon has someone, or something, that can secretly port into my devices.

Except the “problem statement” was clear, and it would be disingenuous in my estimation to answer that “Amazon” does not have access to the cameras when they do. But we understand each other here, so enough said.