Just noticed that I no longer have the option to fast forward (x2 x4) during playback. I have a V3 w/CamPlus and SD card. Anyone else having this issue? I’m not even sure when it started but I know it has worked in the past. I think it went away with last update but I’m not positive. Also when I do playback since last update the the timeline bar covers up the bottom part of screen when in full-screen mode on my phone.

Curious when/how that has ever worked. That is one of the most requested features that has never been an option as far as I know.

The fast forward/fast back has only ever been on event videos in the event tab, it’s never been on local storage playback. 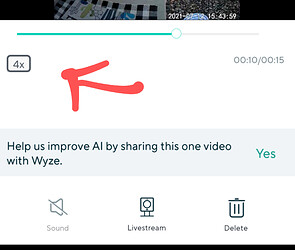 When playing cloud event videos, most times I see fast forward buttons, sometimes I don’t. I can never figure out why they don’t appear sometimes.

Do you have some camplus cameras and some not? That feature is a perk of camplus. 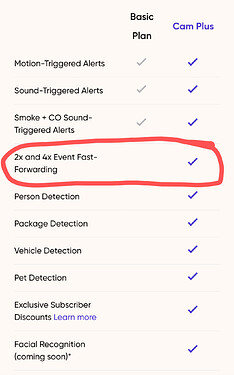 Yep, that explains it. I didn’t know that.

Edit- What I do in this case is, I use another button to open the video in VLC. VLC has a fast forward button, too.

Yep apparently I was in local storage playback and not an event. I see it now if I go to events instead. Thanks.

Here is the issue with the bottom of the screen getting covered. It appears to be the drag/timeline background not going away with all the other playback options.

You are not on latest. That has been fixed. I’m one of the people that reported that problem.

I have version 4.36.2.5 Is that not the latest? It always prompts me when a new version is available as far as I know.

App version, not firmware version. This got fixed a few weeks ago.