Was thinking about getting a Wyze Thermostat since I already use their other products.

I have several extra wires in the main thermostat wire bundle that are not being used, including a “Blue” wire I could use as a C-Wire.

I do not have a control board in my system, but the schematic seems pretty clear where the “Common” connection is and just wanted to verify that is where I would connect the “Blue” wire on the Air Handler/Electric Heater side to create a C-Wire?

As you see, all current connections, G-Fan, W-Heat, Y-A/C (Contactor) all eventually terminate back to the “Common” after going through their respective relays. Which eventually go back to the “Neutral” side of the 24V transformer. 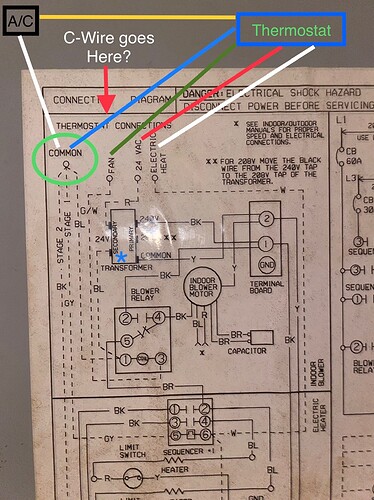 Yes, You wouldn’t be able to use the C wire adapter, you would need to have an actual extra wire in the run from the furnace blower to the thermostat (your blue wire).

Thanks for the reply. I did say I have several extra wires in the main thermostat wire bundle (that are not being used) including a “Blue” wire I could use as a C-Wire.

So the question was is that the proper place to connect it according to the schematic?

Thanks again. My friend in Florida, who owns an A/C company said he just always runs the C-Wire to the inside of the air handler to any screw on the frame where it would be grounded. He does this on all installs of Nest, Ecobee, etc., thermostats.

He even does this when there is no C-Wire instead of using those adapters. He just runs a new blue wire from the C connection in the thermostat to ground in the air handler.

The problem with that is that the common side of the 24 volt transformer isn’t always grounded to the chassis, and an inductive or capacitive coupling isn’t likely to have enough current to power a wifi thermostat. It’s also technically a fire code violation to use a the equipment chassis to carry current.

That is something I mentioned to him about it always being grounded or not?

Did not know about the fire violation as there is a post in here, where someone was looking where to hook up their C-Wire and they mention their wire coming back from their A/C contactor is just grounded to the chassis. So I believe they asked if they could just connect it to there?

Anyway, thanks. I would rather hook it into the actual Common that leads back to the 24V transformer.