Preferred the On/Off toggle visible on the Home page view for each camera. This lets me turn off any camera without necessarily launching it and waiting for it to connect.

It was a very useful shortcut that was present in the last beta. Don’t know why they took it away in this update. Please bring this back.

We’ll be bringing this back! We found a bug in there shortly before launch so we decided to take it down and fix it before we send it out to everyone.

Thank you so much for the quick response. Looking forward to having it fixed. All the best…! 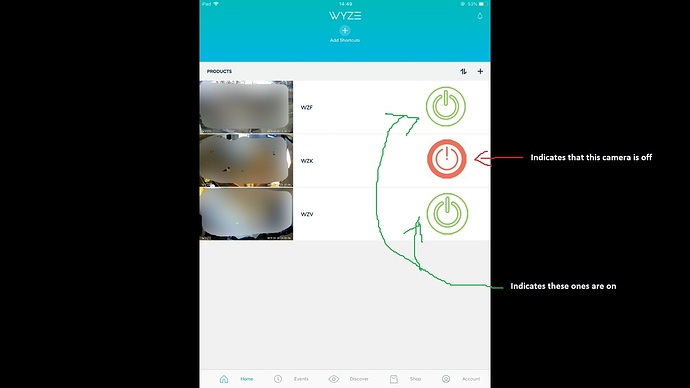 Got that toggle earlier in the beta. Thanks to all of you at Wyze for bringing it back…

@WyzeGwendolyn I noticed some users including myself accidentally turn on and off the camera by accident with the toggle icons being so large. Can there be a setting where you can have hide it from the home screen?

Different strokes for different folks, I guess. That is the essence of a Quick Toggle, to let one see the current status of each camera at a glance without having to do the 1-2-3 connecting/authentication dance everytime, especially when you have several.

As for people who turn their cameras on and off several times, I turn mine on every time I step out and turn them off when I am indoors. They are mostly for monitoring so I don’t need them streaming 24/7 unless I am out and about or when I travel.

As for shortcuts, I’ve had them fail without notification thus meaning a camera is off/on when it was supposed to be in the opposite state.

Whoops! Sorry to hear about that. I like this idea. Do you mind making a Wishlist post about it over in Wishlist - Wyze Forum?

I just posted the idea. I wasn’t sure how difficult it would be to implement. Having a customizable setting would work for everyone.

I’m not sure how difficult it will be to implement either. Thanks for posting!

Just found this post while looking for an option on this. Having the direct toggle with no confirmation where it has been placed in the new app is absolutely terrible, its too easy to accidentally turn cameras off while going in to look at what is going on, then requiring a wait for reboot, sometimes missing what you were trying to look at, I’m genuinely surprised that enough people wanted it to make this the default.

Definitely needs at least a confirmation bubble, or option to hide the direct toggle button.

I don’t think they would add a confirmation prompt because then when you turn on and off your wyze bulbs that would require an extra step. Since everything is in one app, they probably want to make it convenient for everything.

However, I agree it would be nice to have an option to hide the on/off toggle if you don’t like it. I used to turn off the cameras by accident but not lately since I have gotten used to it. I created post on the wishlist but it has not gained any traction. It’s also listed as probably not going to happen.

I noticed some users including myself accidentally turn on and off the camera by accident with the toggle icons being so large. Can there be a setting where you can hide it from the home screen?

It really would be good to have this option, so fat-fingering doesn’t accidently turn off cameras or activate/deactivate other functions. A user-selectable option to have a button require a confirmation click before toggling the function would be ideal.