Blinking light on the front of the cameras

I would love to see an optional (selectable) blinking light on the front of the camera where the other sensors are. This would notify people that there is a camera and help deter bad behavior and activity.

I have my cameras outdoor in black cases which really hide the cameras at night. I think having the option to turn on a blinking light would serve to deter would-be bad elements.

it would also make a target to be removed and stolen if given notification it was there. a better bet would be “property under surveillance” signs as they would know there are cameras, but wouldn’t know the locations.

My cameras are high above the ground on the 2nd level of my house screwed into the siding within enclosures, The only way to remove them is to climb up a 10 foot ladder and bash the cameras in front of the neighborhood.

A lot of my neighbors have outdoor security cameras with status lights and these have been in place and effective for years.

I think if perpetrators are aware that there are cameras recording, at anytime of the day, they would be much more discouraged to try anything.

fair enough, but why make them a target. by giving the locations away not they know where to hide their face and where they have more freedom. in my opinion its just better to let someone doing bad things do them without knowing they are being recorded.

for instance. someone breaks into your home. if they know there are cameras, they now know they might have to move a little faster. I’d rather get that alert, call dispatch, and have some officers show up and surprise them in the act . Then reveal an even bigger surprise that they were indeed caught INSIDE the premises and their lie ( whatever it may be) is completely destroyed by the evidence they didn’t even know what being taken. I was talking to one of the involved parties as were heading away from a scene recently and his story as to what “really happened” was so much more entertaining knowing that we had a officer watching footage of him assaulting someone.

Do your black enclosures cover up the red light on the front of your cameras? I have mine turned off, but having them turned on is always an option. I also have assorted outside housings for mine, but can’t remember at the moment if my black housings have that display covered up or not.

I am in a 2 story house, but opting to NOT put holes in my siding or eves has limited my “out of ball-bat” options and only one is on the second story. I have enough cameras to overlap both front and back approaches, and if “Thuggy” can’t see them in the daylight, he’s higher than corn in Iowa. At night, I’d rather not advertise.

Statistically, your B&E is going to be from someone who has previously been to your house before, familiar with your family or someone from a nearby neighborhood. So they know you have cameras already.

, but opting to NOT put holes in my siding

What is your siding like?
They make hooks that slide up in vinyl siding
https://www.amazon.com/No-Hole-Hooks-Vinyl-Siding-Hangers/dp/B00GMKKZM0

Thanks for that info, but my siding was recently remodeled to the thicker, wider slatted and insulated type vinyl. I can’t figure out at the moment how hooks would help me hang cameras even if the hooks were able to be manipulated and there was enough of a protected area to hang them on.

Then again, I’ve been up for around 24 hours, and my brain is a bit mushy.

If I were to mount them high, my cameras Point of View would be above a mid sized front porch, which would largely defeat any view of a walk-up from the street.

Dwenger5:
, but opting to NOT put holes in my siding

What is your siding like?
They make hooks that slide up in vinyl siding 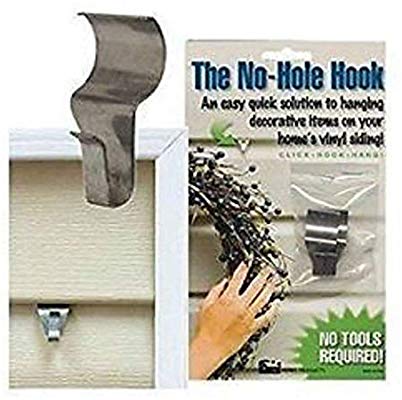 Thank You for that. Sorry for the delay. I have since found these that work well with my mounts: https://smile.amazon.com/gp/product/B0838WQSWB/ref=ppx_yo_dt_b_asin_title_o06_s00?ie=UTF8&psc=1