Am I doing something wrong?

I have bulbs in an entrance I want to turn on and off with the motion sensor between 6pm and 8am. They only come on with motion if I turn off the time schedule in the “on rule”, then they don’t turn off at all. It’s as if the time schedule kills the rule completely. I don’t get it. Any help appreciated . . .

I have the latest firmware and android app, Thanks . . .

I think you have to separate them by one minute. I have a rule for my front porch to turn on my lights at 4:30 PM until 6:30 AM when I let my dog out and then from 6:31 AM until 4:29 PM I have a verbal message through Alexa that says Maizy wants in letting me know that my dog wants in. They have worked flawlessly.

Edit: I do have them sit at the exact same times. So maybe this is the grouping thing

The only other thing I can see is you have your lightbulbs grouped. I enter each lightbulb individually. I have no idea if that makes any difference at all 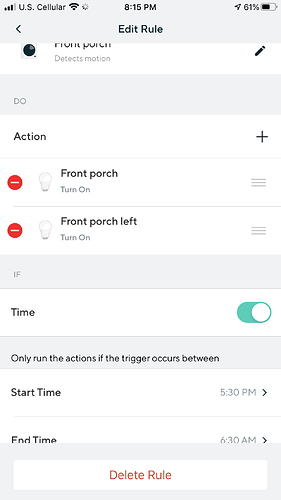 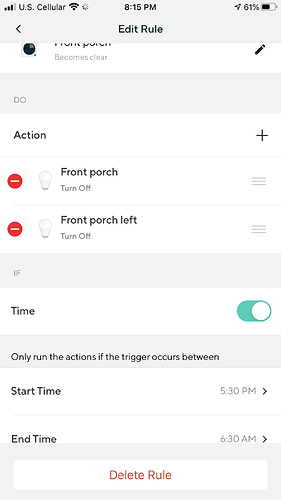 Did you make the rule after 6pm? Just because it is within those times, doesn’t mean the rule is active. The time in the rule needs to occur for the rule to start. for testing, set the rules to start like 5 mins from now, wait till after the new start time and then try your rule. How’s that work?

Hey It Worked !!! That was driving me crazy. So now do I set the time for start at 6pm and end at 8am?

I’ve never had to do that before. That’s interesting. I’ve always just set my rules and they’ve worked. But I’ll remember that in the future if I have any issues with a rule not working. Just set it five minutes from that particular time, get it set and working and then set it for the correct time. Thanks for the extra knowledge! @Omgitstony

That was driving me crazy. So now do I set the time for start at 6pm and end at 8am?

I believe now that the rule is active, you can adjust the start time back to 6p. This should only work for rules that include a start time and end time. I don’t know how the back end programming works, but changing the time could work,or if editing a rule nullifys it’s setting. Just play around and report back to this thread if you successfully are able to get it back to 6p start.

Glad you got it working!

I don’t want to thread jack the OPs issue, but I would love to help try and fix this for you. Are the above rules you posted in the screenshots the ones you are having an issue with?

Edit/ I reread over all your stuff, and was the rule made before you re installed everything? Maybe try delete the rule completely and start over, with just one motion sensor and one bulb. Then if it works add the second bulb to the rule. Still thinking…

Thanks man, I think you might have solved a lot of other people with the same problem in the future.

I’ll try that. Thanks!

Forgive me for what may be a dumb question on my end, but did you create a separate rule to turn the bulb off? That’s the only way I could get mine to work.

Edit: Forgive me, I see both posts now. Let me know if the suggestion about deleting the rule and then re-creating it works!