After powering up, turn off Wyze Bulb after it's left on for X minutes?

Basically we have a lamp which most people use the “dumb” way, that is, they turn the power switch on and off. This means the Wyze Bulb is powering off, and then powering up again when the switch turns on. This works because Wyze Bulb is on by default after starting up.

One thing I’d love is that after the Wyze bulb starts up, it turns itself off after XX minutes. Say 30 minutes. That’ll mean if someone wants to turn the bulb back on the “dumb” way, they’ll have to switch the lamp off, powering down the bulb, and then turn it back on, powering up the bulb where it’ll default to being on. Then it should start the 30 minute timer again.

Is this possible? Any ideas?

Welcome to the community, @barenv. There are already two #wishlist topics on what you are asking about.

I discovered that when the bulb state is changed based on a shortcut trigger, such as a camera detecting motion, the bulb remains in the new state and the trigger is automatically deleted. So, basically the bulb can respond only to one triggered event. This makes triggered events associated with the bulb not useful. A wish list item is to add a time period during which the triggered state remain in effect and after that the bulb will return to its previous “default” state. This feature should…

I would like to use one of my Wyze Bulbs in my garage and use it in conjunction with my Wyze Pan Cam. I had set it up to turn on when there’s a motion event in my garage. However, what I found is that there is no way to automatically turn off the light after X amount time. Would be nice to be able to set it to turn off after 30 seconds once an event triggers it to turn on so I don’t have to manual turn it off or set up multiple “Off Events” during the day.

Can’t you just create a rule? If device on for 30 minutes, turn off.

Click on the three dot menu in the app to create rules.

That’s not an option yet. There is no “delay” or “after X amount of time” option.

Any update on this? I would like my lights to turn off after 10 minutes of no motion.

Curious why this thread has run so long without resolution. Since the very beginning I have been able to turn off my Bulbs after x minutes of on. In my case I couldn’t do that as a group, but I just dropped back to turning off the group when an individual item was on for x. (Hall 2 is an individual bulb, Hallway is the group): 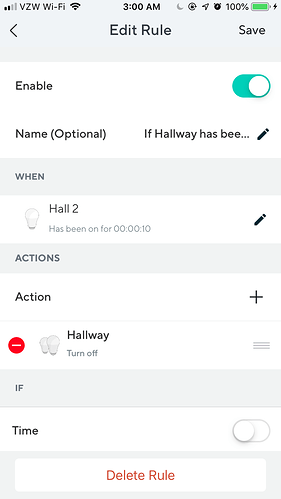