Could be. It’s been around for quite some time. Don’t know whence it came. I know it did work before putting it in camera, as I had it in a dash cam for awhile.

That’s funky… Thanks for letting us know!

that could be your issue. I had run through 5-6 cards before I researched and found the toll that dash cams, or electronics that do continuous read writes have on cards. maybe that started a small failure on the cards and it was only noticed once you tried using it in the wyze cam. def. one of the reasons I researched enough and learned to use TCL format endurance cards.

Just some more information from my attempts… I still have 3, 32gb cards that the cameras wrecked, and have been attempting various avenues to bring the cards back to life…I’m sorry to report that so far all my efforts have failed.

What I can tell you is what WILL NOT work… Nothing in Windows (reformat tool in “this pc”, nor Disk Management… SOMETIMES the wrecked cards will show up in Disk Mgt, and sometimes not. When it does show up, no available function will start/work on the card(s).
Most recently, I tried AOMEI Partition Assistant (both Standard and Pro editions)… NOPE! The card will show up in the dashboard, but ALL commands are greyed out/unavailable. If nothing else, Wyzecams do a super job of totally wrecking SD cards, with no hope of recovering them.

So… It was Oct 18 when I brought this issue the the attention of Wyze… do you have anything on fixing this issue yet??? I’d REALLY like to have/use the advertised functionality that I paid for with these cameras.

Hopefully I have “solved” my problem. I put a wyze branded card in my camera. Also ordered a pancam to play with and another wyze SD card. If they get destroyed, I would hope wyze would make me whole.

I thought you were done wasting your time and energy with it last year.

"I’m done with WyzeCam. I got a reply from support today asking “how far from the router is the camera?” DUH! Now they want to play 20 questions!

All one has to do is look at the post right above this one, and if they know anything at all about electronics, it’s obvious that this product was rushed to market, without enough testing of hardware, firmware, or both.

I paid for a product to be as advertised, and this one is not! Nor is it reliable without constant troubleshooting. I can’t help but feel I’ve been scammed. Sure it’s only $20, but there’s a reason for that… it’s a ball of unreliability, that requires full time troubleshooting to be marginally useful. I’m done wasting my time and energy with it!“”
END OF QUOTE

Are they Wyze cards?

Are you using cards specifically made for security cameras and continous recording? That is a must. Sounds like you may just be using generic Wyze branded cards.

We would actually like to request your Wyze Cams and the failed microSD cards back so we can look into it. We’d then send replacements for the Wyze Cams and microSD cards. If you’re interested, please fill out this form and send me the support ticket number:

I’m having the same issue. Going on my 3rd SD card that has been corrupted. Has this been resolved yet? Are you requesting that anyone having this issue create a support ticket, or just Ed? Thanks in advance!

Oh no! Sorry to hear this, @Digitalrecluse. Could you please also send in a support ticket and let me know what ticket number you receive? If you’re up for it, I would like to take back your Wyze Cam and microSD card and send you replacements.

Thank you for your help. The ticket number is 237366. I’m having the problem with two of my cameras.

Thank you for your help and we apologize for the trouble.

Have you read the thread and tried other formatting options?

Ok, 2 more cards went bad this week. I’m trying 3 high-endurance cards. If one of these get fried, WyzeCam needs to find out what’s going on! 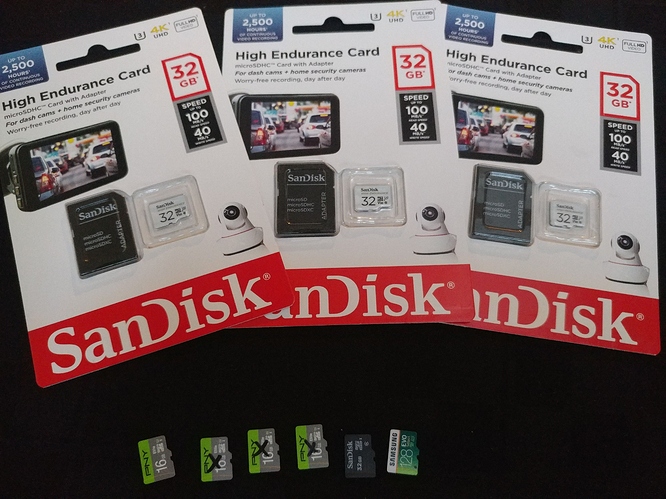 This is crazy!! Wyze cams are eating up SD cards then offering to replace you SD Card with a cheaper version of their cards. This coupled with the fact that they’re not informing their customers that their cams could potentially burn down their homes because they get so hot as to melt SD cards!!

I hope all of you are keeping an eye on that thread.

Guys! I lost 2 cards last week. So I bought 3 high endurance SD cards. There is a NIGHT/DAY difference with these cards. The WyzeCam playback history loads QUICKLY. The sound is not out of sync. I will continue to test, but I don’t think WyzeCam is the problem. Try the high endurance, which clearly says “record for up to 20,000 hours with no worries” Amazon [IMG_20190712_201540]

What is wrong with this company?

There is a NIGHT/DAY difference with these high endurance cards!

They are SO much faster in WyzeCam. Playback history loads instantly. The sound is in sync. I will continue to monitor, but I bet the regular cards can’t keep up with the speed of read/write.

Are the cards that are going bad being used in the same camera? Or having the issue with multiple cameras?

If Wyzecams were cars, there would be a major recall on the Wyzecam Pans due to the frequency of damaged SD cards. I join the chorus of consumers that have had multiple memory cards corrupted and unusable during normal usage of the Wyzecam Pans. The latest one occurred immediately after I did the last upgrade to installed firmware version 4.10.3.108, which I found I would need to flash the reversion to a previous firmware version, rather than simply initiate it from my cell phone.

I have 4 Wyzecams. 3 v2’s and 1 Wyzecam Pans. I use Sandisk 32 Gig Class 10 micro sd cards. I have had no problems with the cards in the Wyzecam v2 cameras, just the Wyzecam Pan. It has destroyed 2 cards. I presently am waiting on the delivery of a SanDisk High Endurance Video Monitoring Card with Adapter 32GB (SDSDQQ-032G-G46A) which I purchased on Amazon.

I understood when I signed up as a beta tester that I would encounter bugs and that there would be times when those bugs would affect the performance of the Wyzecams. That being said, what I didn’t anticipate was that I’d be spending more for micro memory cards than the camera cost me. This is an unacceptable burden to assisting the development of this device that I feel the good folks at Wyzecam need to address, either in the form of a warning, or to come up with a specific make and model of micro sd card and correct procedure for usage that will prevent future corruption of these cards.

In general after over a year using Wyzecams I have concluded that the Wyzecam v2 is a very stable device that to date hasn’t damaged any of my micro sd cards.

Both the Wyzecam v2 and Pan have disappointed me a little when it comes to sending alerts to my cell phone.

I accept that the Wyzecam Pan is a work in progress. What I can’t accept is that it’s costing me money while I wait for them to perfect it.

Wyzecam needs to give this issue top priority. Soon users will start posting publicly about this problem and no one will want to purchase these cameras while there are similar ones on the market without these recurring issues.

I use Sandisk 32 Gig Class 10 micro sd cards. I have had no problems with the cards in the Wyzecam v2 cameras, just the Wyzecam Pan. It has destroyed 2 cards.

Have you tried the Wyze brand card?