Thought I’d share how I hooked my Wyze thermostat to a 2-wire millivolt wall heater, integrated with Google home and has been working perfectly since install (5 days).

When installing, the app said my system isn’t compatible. But you can ignore and proceed.
I bought a 24v adaptor to power the thermostat. Here is how I wired it. 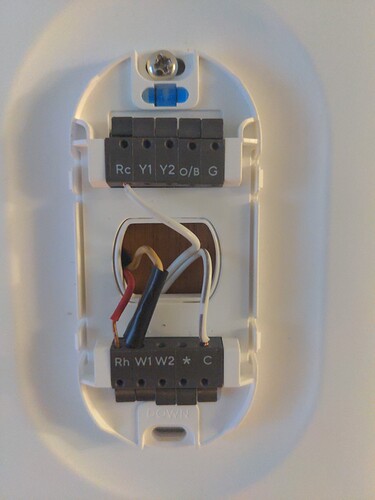 Rh and W1 are from my heater.
Rc and C come from the 24v adaptor.

Good work!! I had opted to use a relay too only because I was unsure how the Rh to W path was wired in the thermostat and was worried about 24v getting into my millivolt system somehow. Your solution is cleaner, especially if it’s works!

@wolftrap - Is your system still working fine with Wyze T-Stat with no issues and without an Isolation Relay? Is your wall heater a millivolt gas-fired furnace with no fan? Does the Wyze T-stat bring the heater on when the temperature fall s below the set point and turn it off when the set temperature is reached? Thanks

I’m hoping to install a new WYZE thermostat to a natural gas stove in a rec room. The system appears to be a millivolt type heater using a battery powered thermostat currently with only two wires. I’ve read multiple topics suggesting this can be done with a WYZE thermostat with the addition of a 24VAC power source. Some suggest using an isolation relay and some seem to have wired it directly. I’m pretty familiar with electronics and suspect the thermostat is using a micro relay internally, but I have not confirmed this. The WYZE documentation CLEARLY states this is not supported. I’m wondering why? Yes, the thermostat, by itself, can’t be wired to do this, but is there any electrical design reason why many of the proposed solutions would not be supported? Granted, this may be beyond some people who don’t have the slightest grasp of electronics, but it seems to me this should be supported with the proper documentation. Is it that WYZE just doesn’t want to put the effort into some documentation or is there a very real electrical reason why you shouldn’t attempt this? I would ask WYZE, but their BOT isn’t that smart.

I don’t have a spare thermostat to test it out, but I’ve heard from at least one person who says that there is 24VAC present between Rh and C when you tell the wyze that you have Rc, Rh, C, and W1 wires attached… I’m not sure if it’s just leakage or if there’s actual potential there, but you might not want to take the risk of killing your millivolt system, and just put in a cheap 24V relay.

@speadie, Thanks for your response! This is one of those things I was concerned might be the case. I have not purchased the adapter just yet to power my thermostat, but my first plan was to power the thermostat with the adapter BEFORE attaching it to anything else and probe the pins with my meter to see if anything like that would be present. Clearly, if there is such a voltage, the isolation relay is the way to go. And assuming that’s the case, I don’t see why WYZE can’t document that. Perhaps it’s too much effort or some kind of assumed liability if they do. Thanks again for the warning.

You can also Check the following link:

I went through my 2-wire gas furnace millivolt some months ago and measured voltage and decided to go with an isolation relay. Since then the Wyze T-stat has been working flawlessly…!

This is long, sorry.

A thermocouple that sits in the pilot light flame generates electricity once it gets hot. This tiny voltage, under 25mv, allows the gas valve to open and gas to flow through the system for both the pilot light and the main burner. If the pilot goes out, the thermocouple cools, voltage disappears, and the valve slams shut. This is the primary safety mechanism in these systems and it works amazingly well. This is also why you have to hold the knob down to light the pilot, it manually allows gas flow until the thermocouple gets warm enough to make enough voltage to keep the valve open for the pilot light to stay lit. (Side note, thermocouples can go bad over time and cause the primary symptom of the pilot not ever staying lit unless holding down the knob in the “Pilot” position)

Now the pilot light also provides voltage in the same manner for a secondary main-burner gas valve to open (which is in line after the first safety valve mentioned above) except the voltage is usually in the 700-880mv range. Same general scenario in that if there isn’t enough heat from the pilot, it won’t make enough voltage to open this main-burner valve neither, though at that point the pilot would be out because the primary valve would likely be shut too. So ultimately the pilot does two things: 1) allows the gas valves to open when the lit, and 2) provides ignition to light the main-burner.

Of course you want to actually have the wall furnace (or water heater, or pellet stove, etc) turn on and off and not just be on full blast all the time, so you put a thermostat in the circuit between the thermopile (it’s a thermopile as it’s many stacked thermocouples to provide the higher voltage) and the second gas valve. All this thermostat does is open or close the circuit, it does NOTHING else. The thermostat provides ABSOLUTELY ZERO, I repeat, provides NO, power of it’s own, all power is provided by the furnace itself and under 880mV. In it’s “normal” state the thermostat circuit is open and no current flows to the second valve. When it gets to the set temperature, the circuit is simply closed, like flipping a switch, and the current is allowed through and the valve opens to light the main burner. When the room warms, the circuit is broken and the valve closes and the burner goes out. This is why the thermostats for these devices require no power, they just use bi-metalic strips (or mercury in the olden days) to open and close the circuit. And because no power was needed, you get heat if the power goes out. The downside is the pilot is always on, and uses a lot more gas over time that one would think, that’s why they have all but disappeared.

So all that actually needs to happen is for the two wires to be closed to complete the circuit. What you don’t really want is to put 24 volts down that circuit as the valves are really made to handle that. Also, it doesn’t take much stray power to have that valve open. THIS is why a relay is what’s needed. But even at that you have to be careful. I’m not an electrical engineer, but I remember reading about some intricacies in doing the relay, that’s it may not be as cut and dry as the layperson thinks, but that’s beyond my knowledge and so I won’t offer advice on that. And then you still have to get 24V to power the thermostat.

Now, could smart thermostat manufacturers put this in their devices? Yes, they could. And apparently the Nests in the UK come with something to do this. But in reality, millivolt systems generally haven’t been installed in new systems in decades and most, not all (I have one) of the old ones are being changed out. The percentage who do have them is small compared to the expense of engineering the extra hardware in. But I do wish someone would.

Now here’s my biggest piece of advice…if you screw up your plumbing, you get a wet basement, but if you screw up something to do with your furnace (gas) you get a fire or possibly an explosion and you can die, maybe along with your neighbors. Few people die from a poorly soldered cold water pipe. People do die from gas leaks. Watching some dude on YouTube or reading a blog is not always enough. Make sure YOU have the BASIC knowledge first when it comes to dangerous stuff.

And lastly, and this could have saved a whole lot of typing, there is a device out there made to basically do exactly all this. It’s the Honeywell R8845U. You can get is on the main site that first comes to mind. But it is about $90.

Hope this answers what you need to know. Honestly, there isn’t much left to say. LOL

Words of wisdom here. I connected a 24c AC power source to Rc / C and a voltmeter to Rc / W1 and got a reading of 10.52-10.89 volt DC when heat is not being called for/heat off, It would seem like a very bad idea to feed that back into a millivolt system that relies lack of voltage as a safety system.

It seems Honeywell is already made an elegant solution (Honeywell R8845U-1003 Relay Switch) for this problem. Sure it’s $72 on amazon, but again that’s small price to do it safely. An added benefit of using a completely isolated relay, one can still wire in a Mercury tilt switch thermostat so the gas heat source can be used in the event of a power outage. (Which is the main reason that I keep a gas blowerless fireplace and a gas cooking range in the house)

Use a Honeywell R8845U-1003 Relay Switch for safety or other method to isolate the millivolt system.

Or go with a cheap 24v fan isolation relay for around $12.

I state with confidence, that wiring to a millivolt fireplace/stove/space heater with almost any smart thermostat, including the Wyze, is as simple as;
• 24v transformer to Rc and C
• Heater leads to Rh and W1
• Rc and Rh must NOT be connected

This solution has worked for me for years and with several different thermostats. 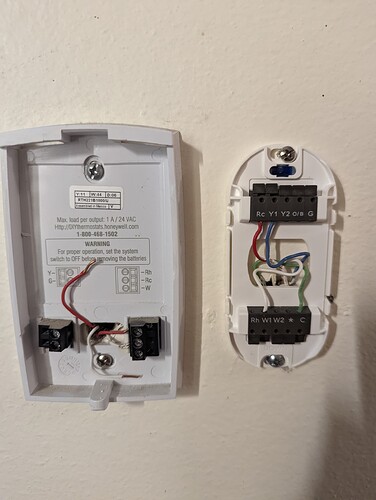 Wire the pellet stove as stage 2 heating through a relay. Be sure to set the stage 2 to only come on when you want or you may consume more pellets than you want.