Several months ago, after multiple attempts at Firmware adjustments, Wyze sent me a replacement WCO.

My original WCO had degrigated from about weeks battery life to 3+ weeks.

I have since posted comparisons between the old and new cameras. In a nutshell, if kept inside and away from any motion, battery drain is around 1% daily. Having a SD card inserted does not affect this.

I have both cameras mounted outside. In general, it first appeared that the colder the temperature, the worse the battery life. The first period I had the SD card in the new camera, then switched it to the old one 3 weeks ago.

In both cases, regardless of initial burn down rates, both cameras were below 20% after three weeks. The reached 50% in 2 weeks. Some days were 3%, some were 6%, once per period there was a 10% day on the old camera. Eventually though, they both reached 20% around the same time.

I have no way to know how old the “new” WCO battery is.

What I do know, the WCO is not designed for the battery to last as advertised if monitoring areas with regular activity. Temperature changes do appear to affect the battery life, regardless of activity.

The PIR Area is used to wake the WCO up. The range is about 30 feet maximum to detect initial motion. The additional Detection Zone will not wake the WCO, it will come into play after the WCO wakes up. This means, you must take advantage of the mount to position the PIR Area to where you want to detect motion.

Do not mount the WCO somewhere that is awkward to get to, or awkward to position the WCO. Every time you remove the WCO to recharge it, you will have to reposition it again. Even if you recharge it in place, you will end up moving it enough to have to adjust it again after removing the cord.

I take down and recharge my 4 WCO every 3 months whether they need it or not. I also marked the bottom of the camera and the base by drawing a line with a pencil (Match Marks) I just put the cams up and line up the marks to obtain the same view and detection zones they had before.

@Antonius, what is the weather like where you have your cameras? Are the cameras inside or outside? How many clips per day does each camera average? I appreciate the recommendation to mark the areas so it is easier to realign the mount and the camera.

How did you get them to respond? I have 3 brand new WCOs and one of them loses goes down to 55% battery after 2 hours. I opened a support ticket and aside from sending me an FAQ with tips to extend battery life, they stopped responding

I live in the San Francisco Bay Area California. Not that cold but morning temps have been in the low 30’s for a couple of months, daytime highs are mid 50’s to low 70’s on some afternoons. All 4 of my cameras are outside on Front, Back, East, West sides. The Front back and East sides get 7-10 + events every day since November 2020. I get almost instant notifications of events, 5 seconds or less. My only issue since the end of February is that I can no longer download the events to my iPhone/iPad from the app, they all fail. I have an open and ongoing ticket with support for the last 11 days. Even with the new iOS app and firmware yesterday I still have the failed download issue but I’m not giving up the fight. How good is your wi-fi signal, if it is low that will kill the cam battery quickly. This is mine 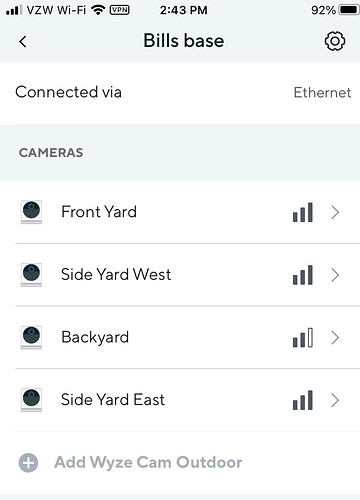 I recommend turning the camera off and recharging it from the base station. See if that resets whatever is draining the battery. After it is recharged, turn it on, leave it inside, and monitor the battery usage. Just face it away from everything. @kmike82

@Antonius my cams can generate several dozen clips each every day. The first few months it still lasted almost 2 months.

I’m also having less than advertised battery life. I bought one starter pack and one additional WCO. After a full charge, one cam is at 96%, the other 87%.

I’ve tried turning them off, charging from the base station but no luck. Firmware is up to date, neither get a lot of notifications. One is lucky to get one a day, the other averages 5/day. I am in Canada but we’ve had unseasonably warm weather this spring. If this is the performance in 5-15 C weather then I’m not looking forward to -10 to -20 C next winter.

Thanks for sharing. Wyze had me believing my experience is because of the high traffic area. Yet, their advertising and informational pages avoid disclosing this.

There was a recent glitch where many of us found our WCOs were not actively displaying on the menu. They generated clips and live viewvl worked. We had to power them off manually, depending on the device they had to stay off about 2 minutes before powered back on.

For a couple of days it seemed the drainage was 3%, similar to just after a recharge. Unfortunately they eventually had spurts where as of today they are close to 25% after 19 days. Weather is much warmer.

So, based on what you shared, our cams have similar battery draining. Mine generate 50 plus clips, per unit, daily. Yours a handful.

If there’s an outlet, can you leave the WCO plugged in and avoid the battery usage all together?

I bought these explicitly to put in places without power. As far as I’m concerned these are defective, either through software or hardware.

Ok but my question is: CAN you leave WCO plugged into an outlet and avoid battery usage all together? Anybody know?

They’ll be exposed to the elements. The rubber flap will need to be open for the cord and that means it’s no longer protected.

I already have power cord running up a tree. Maybe wrap it with electrical tape or something to try to make it waterproof? Sure sounds better than all these battery disappointments.

If you have power available just get a V3 they are les $$$ than a WCO. I have 4 WCO and one V3 because I don’t have many sources of outdoor power and I didn’t want to drill numerous holes through my walls. My outdoor cams that get about 10 events a day use about 1-2% a day. I last charged my front cam which gets the most events a day on Feb.27 and today it still has 63% remaining.

V3 is indoor/outdoor. I have mine outside.

Antonius, thanks for good answers and advice. On your outdoor V3, is the rubber flap protected (like previous post)?

The plug on the provided cable for the V3 makes it weather resistant. Just a word of caution. Check your wi-fi signal from (your network) at the tree in question to make sure it is good. I think the WCO has a better range because it gets it’s signal from the base. How far is the tree?