After reading several educational posts here explaining how PIR sensors work generally (and how there are several dead zones if an object comes toward the sensor in a straight path), I was wondering how effective it would be to use the Wyze Motion Sensor in conjunction with the Wyze Cam Outdoor (“WCO”). Since my primary reason for getting the WCO is to record the delivery people and the several cats (and skunks) that prowl around the neighborhood, it is important that I find a way to make the WCO detect motion coming straight onto my driveway.

I happened to have a spare Wyze Motion Sensor lying around, so I decided to do some testing. This post is to share my findings, in case they may be helpful to others who also need to catch critters that loiter on their driveway.

Day 1 (8/27/20): I mounted the motion sensor a few feet away from the WCO (using the 3D printed mount by WyzePrints on Etsy). I set it to record a video on the WCO when motion is detected. My hope is that the 2 PIR sensors would overlap and compensate somewhat for each other’s dead zones. The goal is to have the standalone motion sensor activate WCO for recording as soon as any approaching objects reaches the green detection zone.

Observations: The Wyze Motion Sensor seems to have a much longer range than the WCO’s PIR sensor. The sensor also triggers a notification alert as soon as it detects motion—even before the video is finished recording. However, due to the increased range, I’m getting far more detections than I care for. I will continue to adjust the sensor’s position until I find the optimal angle for my needs. If adjusting the angle proves unsatisfactory, I may need to remount it somewhere else. It’s a good thing I still have extra wood filler and paint. More to come to tomorrow. 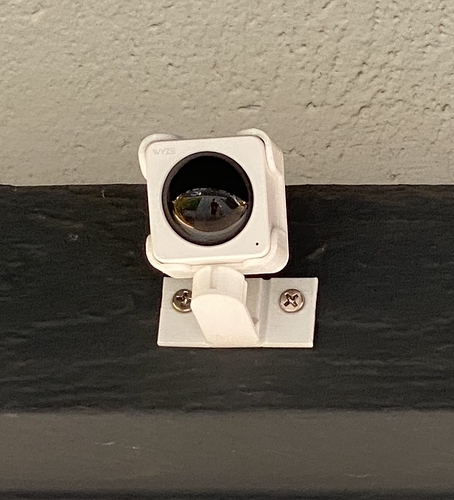 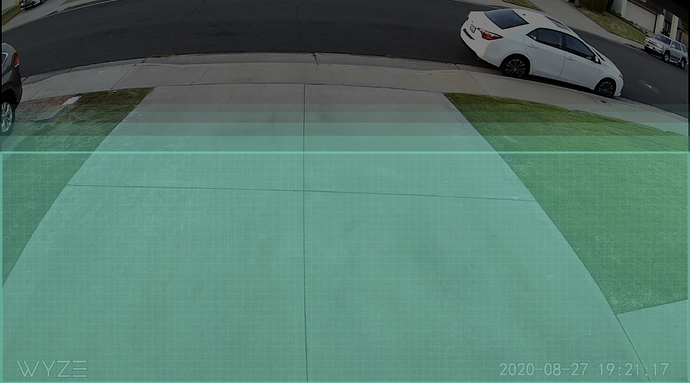 Day 2 (8/28/20): I adjusted the Motion Sensor to tilt downwards, however, wasn’t able to test it’s effectiveness due to the service outage from Wyze’s IoT provider.

Day 3 (8/29/20): Wyze Sense services are back up. I adjusted the angle of the sensor itself to 90 degrees again and it is detecting people walk towards my driveway several feet farther than the WCO’s detection zone. However, it’s also too sensitive and picks up even my neighbors walking on the sidewalk on the other side of the street. Will need to look into covering part of the Motion Sensor with tape tomorrow.

I’ve tried it and it works well. I believe the events it generates also work on a separate cooldown. If the sense PIR is too sensitive you can tape over parts of the sensor to limit the range or stick something like a toilet paper tube over to create a sort of laser trip wire. Since you have a 3d printer I’m sure you can fashion something more elegant once you figure out how to limit it to your needs.

Thanks! Let me try tape if adjusting the angle doesn’t work. Sadly, I don’t have a 3D printer

I got the mount from Etsy.

Oops my mistake, Missed the Etsy part. You should definately be able to get it to cover just your driveway with a bit of trial and error, angle and some electrical tape. I use the sense motion sensors to trigger most of my V2s. The specs say they have a 120 degree field of view which seems pretty accurate based on my observations (at least from left to right not sure about top to bottom).

Do you cover part of your sensor with electrical tape? If so, can you share some pictures for reference? Thanks!

I actually don’t currently need to tape over any sensors. I guess based on your picture If I wanted to ignore the road, I’d tape over the top third or the top half and just keep testing with trial and error till it worked like I wanted it to.