I don’t think anyone else has requested this yet – I think it would be really cool to have battery-powered smart lights for seldom-lit areas like closets which need occasional light for a few minutes at a time. Obviously, these kinds of lights wouldn’t be feasible for primary sources of lighting, but electrical wiring can be intimidating and/or expensive, so a lot of people may benefit from a battery-powered solution that’s easy to mount, easy to integrate with Google/Alexa, easy to integrate with Wyze motion sensors, etc.

There are already a some similar lights on the market that can be controlled with remotes. (These, for example: https://www.amazon.com/GE-38559-Wireless-Controlled-Operated/dp/B07821D483) With the use of a bridge or hub, it seems like it should be possible to make something similar that integrates into a smart-home system. (Perhaps using the existing bridge for Wyze Sense, or whatever’s being developed for the outdoor cameras)

If this gets developed, I also think magnetic mounting would be an awesome idea for something like this. It would make it really easy to take down and recharge when the time comes.

I have 4 battery-powered motion-activated lights with light sensors and magnetic mounts and they’re awesome. I got them on sale ($15 for 2) and I have them mounted above the sink, stove, washing machine, and in the hallway. I use the term “mounted” loosely because they have magnetic bases that stick to the sink window curtain rod, range hood, wire rack above washing machine, and the base of the hallway light fixture. Makes them easy to take down to charge too.

Since they only activate when it’s dark (light sensor) and motion is detected (PIR sensor), they’re off most of the day and only turn on when I’m walking through a dark house and need just that little bit of light to see what I’m doing in each area. I charge them about once a week (via USB).

Sadly they are no longer available or I would buy another 4:
https://www.amazon.com/gp/product/B07L3N99B9

I think they work very well without being “smart”, although if they had that option and could retain the same battery life I would love to have visibility (see what I did there?) on usage and allow them to be remotely triggered. They would probably need a separate battery to operate the smart sensor so when the main battery for the light dies you don’t lose connection too.

Nice. Amazon doesn’t have those right now, but they sound great. I may get something like that for the closet. I’m curious how many minutes per day (approximately) your lights are on? For my purposes, I’m thinking the light would probably be on 2-3 minutes per day, at the most. I’m hoping I wouldn’t need to charge them once a week. Once a month would be closer to what I’d hope for. For a closet, that seems doable. I could use one in my freezer, too, (the fridge is lit, but the freezer isn’t) although it may be tougher to find one that can withstand the temperature.

It might overkill to make something like that a “smart” product, but it would certainly be cool. If it were connected to the Wyze contact sensors, you could probably make the battery life more efficient, because it wouldn’t need to wait until some period of time after motion is clear, to turn off the light. I think it could make a noticeable difference with a product like that, battery-wise. (You’d probably still want to configure it turn off after 1-2 minutes, just to be sure it doesn’t drain the battery if someone accidentally leaves the door open)

USB charging is also way simpler than swapping out batteries. All the ones I’ve seen so far have AA batteries or something similar.

It depends, but since I leave most lights in the house off I end up triggering the battery powered lights for about 10-15 minutes a day. I had one in my car when one of my interior lights blew out and I went 3 weeks without recharging it, so it’s definitely variable based on usage.

I’ve basically stopped buying things that take batteries in favor of devices that are USB rechargeable. Flashlights, under-cabinet lights, even RC cars/boats (definitely only for my kids

If you guys can create this
no company in the world has and if you could pull this off this would make you guys a ton of money.

There are no bookcase lights anywhere that I found from Amazon online to any lighting company.

A bookcase light that does not need to be plugged in but is Bluetooth or Wi-Fi app controlled.

I have a massive library upstairs in my house I have a lot of friends who have smaller libraries and bookcases with books but no mood lighting to wash over the bookcases in color.

I’m going to send you a picture of my library and I’ll show you what I’m talking about please pass it along to whoever treats products for you this would be a killer product for you if it can be done
inexpensively.

I was looking for the same thing from Wyze. I would like to get battery powered lights for places were there are no plug sockets.

I would really like a smart led Puck from wyze.

Have you looked at these: 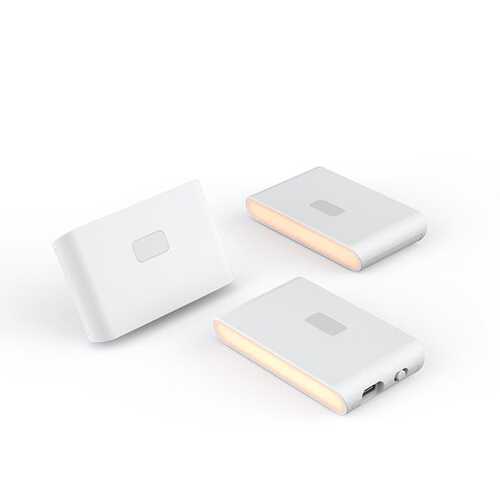 I should specify. I would like a smart one. Meaning I can control from my phone. Also I would like rgb if possible. And beyond that non Battery.

And beyond that non Battery.

And I didn’t put my wish on this post. Some moderator did.

I apologize. I made the assumption that you put it here. There wasn’t any indication it had been moved.