Poll: What are you using Wyze Cam for?

Do your pets have secret lives? Do you need to watch your kid while you’re at work? Making full use of Amazon Prime? Securing your home?

Share with us what you’re using Wyze Cam for!

If you want to vote for other options, comment below!

I placed a pre-order a few weeks ago for five cameras. My wife and I are expecting our first child in May and (at the time) had an older dog with several health issues. The plan was to use the cameras to monitor our pooch and use one or two as baby monitors. Unfortunately, my dog took a turn for the worse and we had to put him to sleep.

We have been slowly converting our home into a smart home and I am excited to get these new cameras installed when they arrive!

Congratulations on your new bundle of joy!

I’m so sorry to hear about your dog.

I hope you get your cameras soon so you can have it installed. Smart homes are a lot of fun!

I have just one so far, waiting on my other deliveries. I have another 12+ other cameras throughout the house. Many I would like to replace with Wyze if they can keep up the good work. I currently use my one for basic security but I have many that watch my pup. In the end security and canine watching are the goal.

Cool! You should be getting your cameras soon enough. Just curious though, what are the current 12+ cameras you own?

2 of my 6 (soon to be 7) cameras are long awaited replacements for Canary Security cameras that I sold off about 9 months ago. Those two cameras serve double duty, pet monitoring and security.

The other 4 (soon to be 5) cameras are all about the furballs. Two energetic Siberian Forest Cats (3.5 and 1.5 years old). I rehomed them both from a breeder. The 3.5 year old was a voracious breeder, while the 1.5 year old is now in his fourth home (two previous people had returned him - once at 6 months and then a second time just 6 weeks ago). They are the most athletic cats I have ever owned.

Right now they are still in the exploring and loving everything I built for them, but me not so much. I am much taller than their other human companions and since my house doesn’t smell like a giant pheromone ball (if you have ever been to a cat breeder’s house, you know what I mean). So the cameras are all about monitoring food intake, see where they are exploring and making sure they don’t get in trouble. Later, it will be all about capturing the crazy moments. I already have a 6 minute clip of the younger one climbing on top of a dresser, then onto the tv mount, to actually on top of the LCD tv, and finally onto the curtain rod, which he traversed end to end and back (too big to upload).

I have an 8 camera ZMODO DVR system hard wired that I use my entries and exterior footage. I have several Foscam and Foscam clones (PTZ versions) indoors for watching my dog. I also have several D link Cameras that I bought cheap to put in places not covered by either of those types. I have an exterior PTZ dome cam as well but I never set that up, it was a generic brand name I can’t remember. I’d like to replace all the wireless ones with Wyza Cams and add some exterior cameras as well. I also have new ideas I’d like to use some for eventually. I have turtles (sadly down to one now :() that I’d like to time lapse / monitor. Also am hoping to get chickens this year and would like to monitor that as well.

I have also done a number of installs using various brands for some customers over the years. I mostly used Blue Iris software with that so I was able to use a variety of cameras.

Security - Easy, I use Alexa to control my cameras. My wife doesn’t like the idea of having cameras around the house. So I power them through Alexa. When we leave we tell her to turn on all the cameras and they all power up. When we are home and want privacy, we just tell her to turn them all off. My next step is to automate the ones that point at the front door, so when someone pushes our Ring doorbell, the interior camera pointing at the front door comes on.

My biggest problem is mounting them. I am looking for a good GoPro style mount that I can easily print, I already have the wiring in the ceiling, so I want them as low profile as possible. I have already mounted Echo Dots throughout the house printing white mounts and using white usb cables. You only see about an inch so it doesn’t show up at all. I figure I can do the same thing with the Wyze Cams. I use the alarm system wiring that was put in for motion detectors, put my own USB end on and now I can put them throughout the house. Using Alexa to turn them on or off makes it easy and helps put my wife at ease.

I have attached a picture of the Echo Dot mount I printed, my ceiling is white so you really don’t see it. Now to work on the Wyze Cam mounts 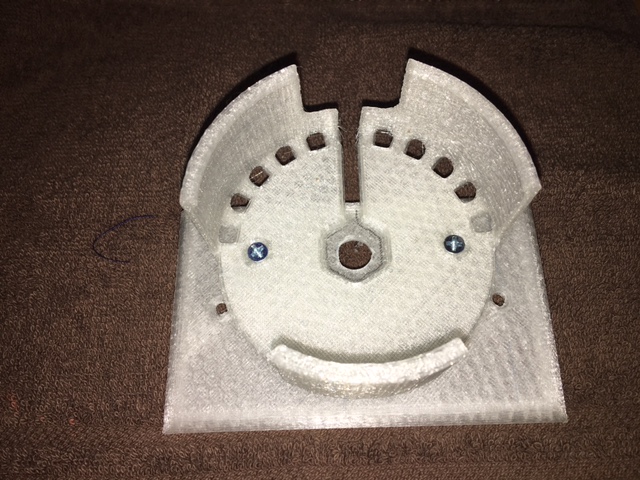 So what device are you using that is controlled by Alexa. There is no Wyze integration with… well anything. You appear to be doing the same thing I am, but I was just wondering what your “switch” is. WeMo, TPLink, Insteon, etc?

Mine will be used to monitor the glassdoors at the lower level of my house. Strictly security purpose.

I have two V1 cameras.

The first is set up on the side of my aquarium. Allows me to look at my fish from work. It can be quite relaxing, though I really wish there was Alexa integration so I could put an Echo Spot on my desk instead of using my phone.

The other camera is pointed at the gauge of my oil tank. I always forget to check it when I’m in the basement, and being able to keep an eye on it from wherever I am when I think of it is quite convenient, especially in the winter.

I only have one v2, and so far I have experimented with:

Only one so far and plan on one at each entrance of my house. Had some vandalism recently and want to feel more secure. I’m still playing with how/exactly where to mount them. Have ordered the little enclosure from Amazon and am toying with an old metal birdhouse I already have.

Although we haven’t yet orders all that we need/want; our purposes are:

Mostly for security. Like an earlier poster, I have an ancient 8 camera (6 in use) ZModo DVR system. It’s an old analog wired system that is by today’s standard - pretty crappy. I have been looking to replace it for several reasons. One of those is that I have never been able to get any computer with an OS newer than XP to be able to remote view it, and soon the last XP computer will get replaced. I know what I would like to do for a “central” system, but don’t really have the money. I will end up with a IP based system with a mixture of 2K and 4K cameras - mostly wired, but maybe some WiFi based. I’m playing with the Wyze cameras (I have five and two more expected tomorrow) as a stop gap. The WiFi has the advantage of being easy to move around. For example, tomorrow I will have an electrician at my house doing final hookup of my new solar system. I will be at work so I moved two of the cameras so I can watch what he’s doing.

I also have one operating as a dash cam in my pickup and will likely put another one or two in the truck.

Right now it’s just for watching the dog while we aren’t home. I’m going to get more and start a security set up as well.

I use one to keep an eye on my patio.

We travel extensively, for long periods. We also spend the winter in Texas.

Wyze Cams are perfect for watching our home, all the rooms, at all time.