I just mounted my pan cam outside so it can see down my drive way and even partially down my road. I want to be alerted when motion occurs as far as the road but AT LEAST the edge of the drive way, but it seems I only get notifications for motion detected within 20 feet or so. It is detecting motion father away on a live feed but not notifying me/recording it. Increasing sensitivity didn’t help much.

the motion detection ( think the detection zone) isn’t based on “distance” exactly…its is based on pixel changes to send alerts and record. PIR is based on something that would affect be affected by distance but our cameras do not have PIR. although the sensitivity slider is rated at a certain scale, that isn’t measuring exact pixels or percentages either to my knowledge. could you post a picture of what it sees and the area you are wanting to detect? maybe at the distance you are looking at the pixels are not effected enough because of the subtilty of changes. I have a couple cameras looking outside from indoors and they pick up things at roughly 40 to 50 feet if I were to guess a distance.

Also make sure you don’t have a detection zone set in the app that is excluding the more distant are you want to monitor.

Well when I saw your post yesterday I almost replied that my cams do respond at about 40’ away, but they were V2’s.
So I set up my Pan-cam looking down my driveway at the street where cars drive by USUALLY less than 20MPH (I’m on a deadend court about 70’ from the end).
I’ve been getting alarms all morning,
Pictures for distance reference here:

How big a motion do you want to alert from the end your driveway? A person? A car? A Fedex truck or a school bus? I find that the size of the object motion makes a difference in the distance of an alert because what the camera is tracking is pixel changes.

Identifying and tracking the motion isn’t my issue, it’s actually getting the alert that motion has been detected. My sensitivity is at 70. 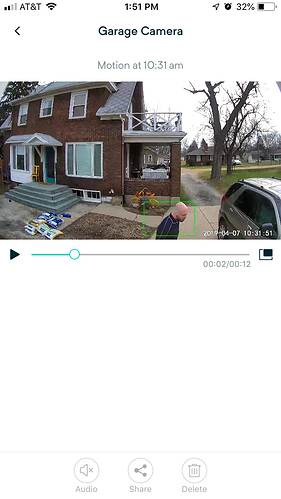 In the screenshot, I walked out of my back door (teal color) but it didn’t alert me until I got to the car. I know it’s tracking my motion because the cam followed me as I walked down the steps - but if I didn’t walk to the car I’d have never gotten the alert

I want to get alerts if for example, the mail is being dropped off, or more importantly if a person walks down my driveway.

I would set a smaller detection zone on the area you want. (say the driveway) and turn the sensitivity up and see if it triggers on that. the sensitivity is only the threshold for the amount of pixel change within the given detection zone. so a higher sensitivity in a small area would be much easier to trigger. at least that my understanding on the functionality of it.

Actually, the green box is not a indication you will be notified. Sensitivity determines that. I have a camera that sees rain pouring off my roof, indicates it with a green box, yet doesn’t notify me because of my sensitivity level. Go to 100% and back off from there.

oops, my bad. thought the green box was part of the notification.