I have a Honeywell Thermostat (mercury based) that has 3 wires - Red, White, and Blue. I believe the Blue wire is the C wire, but how can I confirm that? I don’t have access to the boiler system unfortunately, only to the thermostat.

If Blue wire is indeed a C-wire, do I just connect Red to Rc, White to W, then Blue to C?

Yes, the B wire should be wire to the C terminal on the Wyze thermostat.
More information on the B terminal here:

So I did try to set up with the assumption that blue is a C wire.

R to Rc, W to W1 and B to C. Pretty much what the Wyze instructions said.

The Wyze Thermostat did turn on and was able to set the app until the end of the walkthrough. However, it seems like my heat is on indefinitely. Like I can’t turn it off, or control the heat such as lowering it to 67 through the app or manually through the thermostat itself.

So here’s what I have set to get this thermostat working. For some reason the blue wire is actually not a C-wire. I called for help from a someone who knows about this thingamagic (mostly using FaceTime). He basically suggested the following:

Get a 24v transformer that will be connected directly to thermostat. 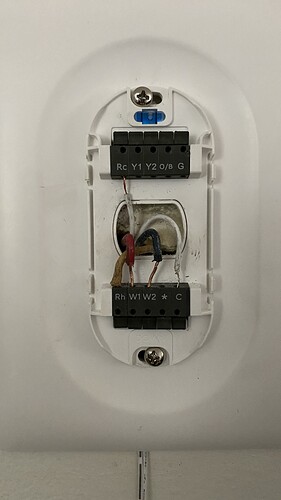 Wyze app then prompted me to remove the 2 wires (image below), which was weird because those wires did not even exist. Anyway, I clicked on “Check again”, then prompted me to either “Skip” or “Try Again”. I clicked on Skip. I went on complete the set up. I then turn the heat off from the app and it worked. I’m basically able to control my heat with my new Thermostat.

Apparently, according to my friend, my boiler has a rare wiring set up which I don’t fully understand. Ideally, he would like to install some sort of relay into the control board. That said, the transformer will be temporary until we get access to the boiler room.

I’m glad you figured it out!

my boiler has a rare wiring set up

Interesting… I will remember this topic in case any other users com across this type of system.

Yeah it was a bit of a pain in the arse, but seems to work out…kinda. I only had less than a day to see how it works with my building’s boiler system. Here’s what I’ve seen so far:

Let’s say I’ve set the preference Home Temperature to 72. But the current temperature is at 76. At this point my heat is not on as I think it will try to go down to the Home temperature. Which is 72. I then manually changed the temperature to 76. The heat will turn on. But here’s the bad part, once the temperature changes from 72 to 76, I would assume the heat would automatically shut off. However, it just keeps going unless I manually turn it off or lower the heat.

It seems to be a common experience that the heat overshoots the set temperature. My Wyze thermostat has been in use since Monday night and it will not turn off the heater until it shows that it’s at least one degree warmer than I have set it to. If you let it run, it may turn off at 77 degrees. So if you set it to 75 you may end up with the desired 76 degrees. I hope that this is a bug they will fix in the near future.

Given I only have 3 wires and no C wire, I have to use an external 24v transformer. I would really like not to use the transformer. So instead, I’m gonna go directly to the boiler room to attach the c-wire adapter. Can someone confirm that I can I still use the C-wire power adapter it came with to attach to the furnace even though I don’t have the 4th (G) wire?

No, it will not work. Do you have a picture of your old thermostat setup?

Mind explaining why it won’t work? I don’t have picture unfortunately. It’s a 3 wire connected to R, W, Y.

G is the common with the wyze adapter. it uses a diode bridge and signaling inside the thermostat to send the signal for fan or Y through the Y wire .
here’s the schematic of the adapter:

Sorry. I failed to mention that the Blue wire happen to be not either C or W2. It’s actually Y. So my wires are, R W and Y. So it still won’t work without the G wire?

Without the G wire, there is no common. I don’t know if the wyze has the signaling to allow it to switch Y and W instead of Y and G… probably not.

Did you end up installing the relay? I should have done more research before purchasing the WYZE thermostat. I think I have the same old thermostat set up. 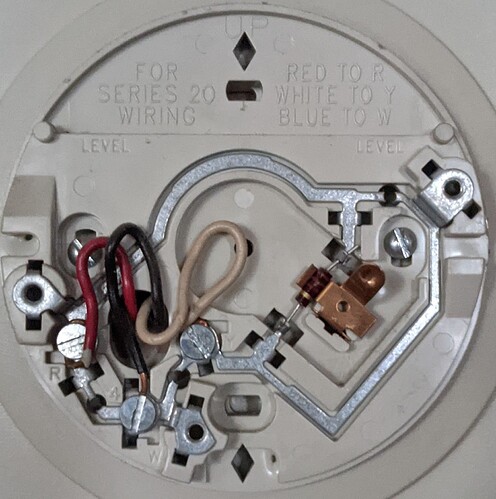 Would it work if you moved the blue wire from W2 over to Y1? My thought is the thermostat would think it’s turning on the AC when the house temp gets too hot, but it really is just triggering the close valve to stop the hot water flow on your boiler.

The rbw stats I’m used to are for hydronic systems that use the old 5 wire zone valves. They need power to open on heat call, r to w and power to close when call is done r to b. Without power to close boiler will continue to run.