Can anyone explain what this glowing thing is?

Hi all. New to the Wyze community. I am trying to figure out what is being picked up by my camera in my basement. I am used to seeing little orbs or bugs pass by but this one is different. Apparently new users can’t upload files (I’m not sure how long it takes before you can) but I do have a 5 min clip of it. Essentially there is a big white blob (not at all shaped like an orb) in the top right corner that moves around the right side of the screen and slowly and repeatedly blinks in and out of existence. It was visible during the day on Jul 9 and during the night on Jul 13. I went to the basement when I noticed it on Jul 13 so I could see if there were any obstructions, like a spider web that might be blocking the camera. But there was nothing there. I shifted the camera over to see if I could still pick up the phenomenon at a different angle but it has since disappeared. I honestly have no idea what it is and I’m hoping someone out there has had a similar experience so it can be explained to me. I wish I could post the video, it would be very helpful. Wyze, I did submit some of the videos to you. Please explain what might be happening.

I have asked the moderators to allow you to upload your video, but I suspect it is just a spider close to the lens while the IR lights are on and the camera is in night-vision mode. Your activity says were probably on the threshold of being able to upload the video without any help. Please don’t upload a 5-minute video though, or you may encounter other restrictions.

Keep it as short as possible.

Thank you. Like I noted, I went to check on the camera in real time and there was nothing in front of or around the lens. I still can’t seem to upload the video.

Ok, I’ve uploaded a video. You’ll notice the white spot fades in and out and travels up and down the right side of the screen. I have more videos that show more movement, but this should give you a decent impression of what’s happening. I did not find any spiders or webs around the camera.

Maybe it’s whatever ate the six legs off the giant spider? JK

Seriously, some types of things (eg bugs) are extremely reflective of IR light and thus present a fuzzy glow in night mode. Usually when these are bugs, they are fast moving though. This one is very strange.

I honestly have no idea. But if it’s anything like the big fellow I would be on the first flight to Mars!

That is a weird one, all right. However, I played the video back at 30x, and when you do that you see something mostly transparent move along the red lines I drew in the picture below. That thread floats around, and becomes more and less visible as it does so. So my guess is a spider web, with something very small on it.

So did you put the camera down there to make sure the big spider didn’t move? 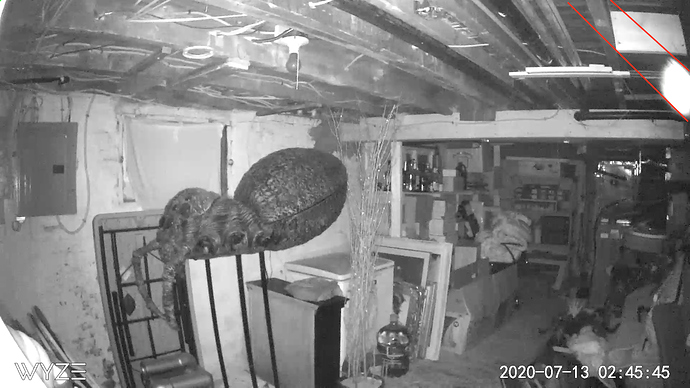 Thanks, yeah it sounds reasonable that it’s a spider web of sorts. The weird thing is that it also fades in and out constantly. I thought it might just be a glitch in one of the cameras bulbs but the anomaly is gone now.

I bought a couple of cameras as baby monitors, but since the baby currently sleeps in my room I don’t actually have to use them for a few more months. Thought I’d put the cam downstairs to see if anything goes bump in the night. So far just a bunch of bugs flying around.

I think it fades in and out because of its orientation to the camera’s IR lights. Think of a thin particle caught in a web that slowly turns sideways because of slight air motion, maybe from a heating system.

My garage can has the same thing all the time. I found it to be spider webs of a bunch of real small spiders. I cant see then but when I rub my duster in the area right in front of the camera they are not there any longer. At least for a couple of days then they are back as I said one time I seen a small spider on the Web that the camera seen that is about the size of a head of a straight pin.

Yes its a spider, idk why, but we have to sit and eatch them on our outside camera’s every night, you can get rid if it everyday and by night a new one has made our camera’s home. And they gliw like light bulbs at night on nightvision camera’s. Its disgusting.

I had something real similar last night. It’s a bright light that fly’s very quickly from top right, to bottom left.

Here is my white light experience.

Dust or some particulate that is really close to the camera, bring illuminated by the ir light.

Yes, most don’t understand how close the lens can focus, or on how small a particle that is close to the lens. Things you might never notice if staring directly at the face of the camera at the time.

Turn your sensitivity below 25? to mostly eliminate the tiny things, but still get the big things.