cool thanks for the test! that’s good to know!

Motion detection was enabled and constant recording to SD.
I placed both the camera and battery in a closed cardboard box with several holes in the back for ventilation, and a big hole for the camera lens in the front.
The magnet on the bottom of the camera magnets to the battery (although not too strong).
No overheating was caused.

Screenshots of the camera on top of the battery attached. 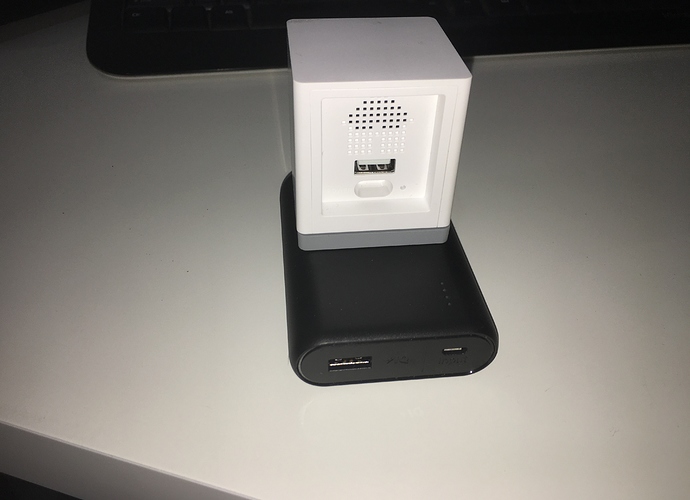 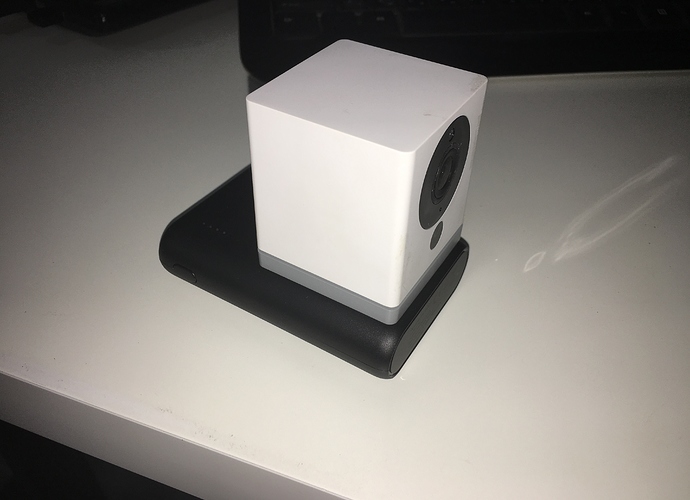 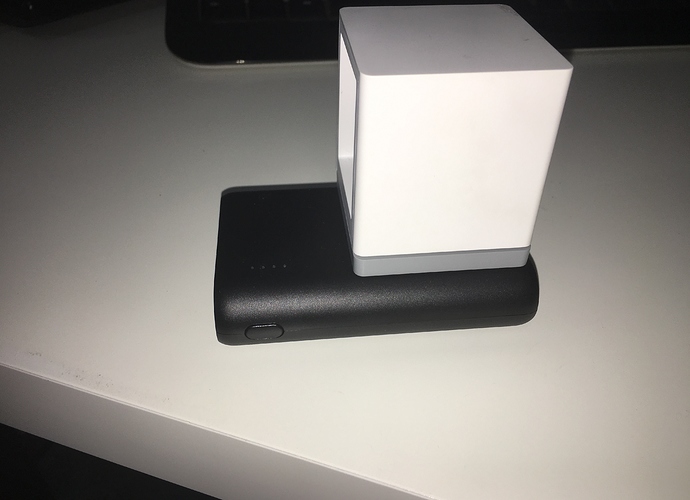 I just got my first Wyze Cams last week and one of the things I was curious about was how it would perform connecting it to a power bank. So I’m glad to see some folks like yourself have already tested this out. Just curious, have you done a test with the recording to micro SD card set to “Record events only”? And if so, what was the battery life like? TIA!

The expensive Blink camera says it lasts 2 years with an AA battery. It would be nice if wyze could work on a a version that does not consume so much power. I think one year would be sufficient. I dont think recharging a USB Battery every day is a reasonable work around.

The function of a battery-powered Wyze Cam may need to be different than the powered ones. I currently have 3 Wyze Cams and 2 Pan Cams in my house. I also have several Blink cams that are battery-powered. I have 5 outdoor and 2 indoor. They do not stream constantly. Instead they detect motion, which triggers recording. You can also view the Blink cameras in real time stream, but that is for short periods of time. It asks after 20-30 seconds if you want to continue to watch. That way the battery lasts longer. They say up to 2 years. I haven’t had them that long yet. If you watch the real time view a lot or it is triggered much more frequently, that will run the battery down quicker. I have them for security, whereas I use the Wyze Cams to keep an eye on my dogs. I have the Pan cams pointed out windows to keep an eye on my front & back yards. I just really like the battery powered cams, because I can place them anywhere and move them easily.

I’ve been trying various setups using batteries, solar panels and the Wyze Cam. Here is the latest version. Unfortunately, the battery only lasts a couple of days. The problem is that the camera is drawing too much power versus the battery refresh rates from the small solar panel. I have it setup for continuous recording and HD event notifications. 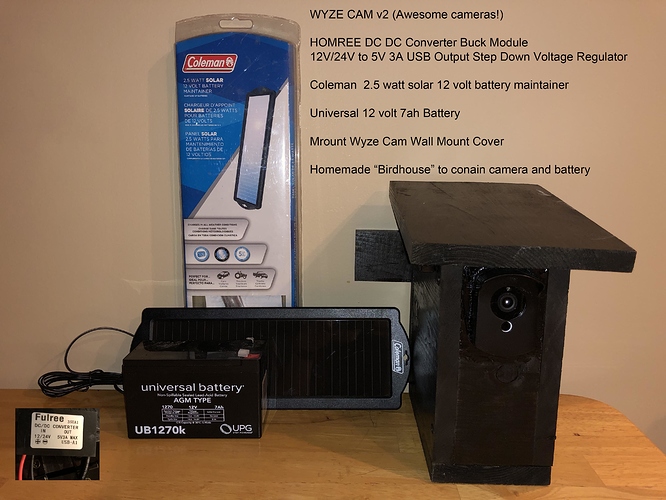 Just adding to those who are using USB Batteries for your camera, I think that it would be cool to make a 3D printed base with a battery AND a plug.

Ninety7 makes this for the Google Home. And it allows you to keep it plugged in 99% of the time, but then when you unplug it, the battery keeps the camera going for a while. It’s obviously not a long-term solution. But something like this could just clip onto an existing Wyze Camera without a new piece of hardware.

On the software side, maybe there could be a special timelapse mode which goes into a deep sleep and wakes ever X seconds to take a snapshot?

Did you try this without continuous recording? If it was only recording on alerts only I think the battery would last pretty long.

Here is twist and a question on what is being discussed above. I have several locations where I would like to put the Wyze cam but have power only during the nighttime hours (i.e. photocell triggered lights). So, what I am concluding from the research on battery power already done above is that a common USB power pack that would recharge from AC power during the nighttime hours would not have the capacity to power the cam for the daylight hours, or would it? How big would that power pack have to be to power the cam for up to 16 hours?

There are other battery-operated cameras that last for two years on a single charge… and aren’t much bigger than Wyze… this feature would be much appreciated, as an outlet doesn’t exist everywhere I want to place a cam!

I’m curious what camera you have that you’re getting two years on the batteries. I would love to have a couple of those.

I don’t own one, but the “Blink” cam by Amazon advertises a 2 year battery life. Of course that’s contingent on how many clips it records… but I’d be happy with even a few months.

Yes but Blink only gives 5 hr per year of video watching/no recording.

This is probably just as efficient as the Wyse as long as it is used in the same manner - notifications only and limited to a few seconds viewing per instance. An AA battery has 4 Wh of energy while a 13000 power bank has 48 Wh of energy; or the more common 26000 has 96 Wh. Using the Wyse with a $30 power bank would give you then 20 odd years of service - but don’t record.

I’am with RickO. And many others. Use a power bank: because of the volume produced they are the least expensive medium low voltage portable power supplies out there. Since most have 2 or 3 outlets they can power 2 plus cameras giving 360deg coverage with no moving parts (moving parts = big power consumption). The now common 26000 mAh ones ($30) give nearly 100 Wh of energy. According to Blink a camera like this will give 5 hrs a year of motion detection notification and viewing (BUT NO SD RECORDING) using 2 Wh per year. Even if Wyse is less efficient than Blink (which I can’t see) this will give many YEARs of service as long as recording is not used. This to me is like the “weatherproof” argument. If you want weatherproof buy the separate enclosure; its not efficient for Wyse to produce a separate “weatherproof” camera and its not efficient for them to produce a “battery operated” camera either. Their objective is to produce an inexpensive quality camera that is reliable and just works.

With everybody talking of solar charging take a look at the link below for a 10W charger, maybe connected to a USB battery pack it may work any thoughts?

I just hope that, if the batteries need to be changed they are easily accesible getting 3 months + would do the dal for me

Doing some basic readings I measured 304ma with the IR off and 422ma with the IR on. This camera is an energy hog. So will need to tinker some more to figure out how to optimize it for battery usage. Doing recordings on and off made no difference on the current draw and switching between SD and HD also made no difference. I don’t want to take mine apart just yet but if it’s stepping the voltage down to 4v or less than the use of a lithium battery could be optimized by bypassing the voltage regulator on the PCB if it is in fact stepping down. Also a typical USB powerbank which boosts LiPo battery voltage up to 5v wastes several milliamps in the process, so you could potentially save 80ma by using 3.6-4.2v directly. Overall we could shave off about 100ma of draw. I’ve used small proximity sensors in the past that could be used to turn the entire camera on and off in the presence of motion so anytime there isn’t anyone within 20 feet of the sensor the entire camera remains off and once a person or animal is near it will turn the camera on, Not sure what the boot up time of the camera is. This essentially drops current draw down to around 3ma and as soon as a person is near by the draw jumps to 200ma. This could potentially make a 10,000ma battery bank last for weeks to months. Orrrrr the developers could release a battery version optimized for power usage

We’ve been working on the outdoor camera with our manufacturer! We’re still in the design phase though so we don’t have any dates or promises to give yet. Some people have requested solar power but we probably won’t be able to make that work with the first version. We are investigating battery power though. Best, WyzeGwendolyn

This camera doesn’t have a passive infrared sensor. It detects motion through pixel change. Pixel change pretty much uses the camera always on to look for significant changes in pixels over short times. It uses a lot of power because it never really turns off.

The cameras that last long on battery use passive infrared.

Side note: These cameras are xiaomi Xiaofang. Being able to power them with a powerbank is advertised by xiaomi. The xiaofang cameras can also stream direct to your phone without a network according to this. Interesting feature.