Is anyone having problems with the alarm not going off at the correct time or at all? Also the watch reboots periodically throughout the day. I had these problems with the first and now again with the 2nd. Just waiting for the rust to appear again.

I’ve never used the alarm feature, but my first 44 which I replaced due to rust would reboot a couple times a week. My second sometimes reboots a couple times in the same day (sometimes during stopwatch events :-/ ). Also, it periodically fails to notify on text messages (a problem the first watch didn’t have). Notified support, and asked to replace with a 47, but they refused, and wanted me to do factory reset, etc etc. I told them just to close the ticket… I’m finished wasting time (no pun) on this watch.

Mine too resets during stopwatch, very annoying. It’s not like the 47 is any more expensive and I can’t give the 44 a bad review because they are no longer selling it (for good reason) so they should give us the 47 as a replacement. I will wait for this replacement 44 to rust out and also ask for the 47 (or a refund) to see what they will do. In the meantime, I keep the wyze band on my nightstand as my alarm. I was actually quite happy with the band and will probably just resume using that.

After two failed 44s, I bought the 47. I’ve been happy with it. For me, it’s everything the 44 should have been. For example, the two outer battery terminals on the 47 are covered, on the 44 they are exposed. Why is that?

Has anyone successfully received a refund on their 44? I should have requested that after my first failed 44. I did ask for a 47 to replace that 44 but my request was denied. After my second 44 started failing, I just gave up.

What’s frustrating is there have been no updates, explanations or any other news about the 44 from Wyze. If the product was unsuccessful, why not just say so? Be upfront with your customers. Give those who purchased the 44 options for a refund, a replacement with the 47, or a new and improved 44 if/when that is offered in the future. The ongoing silence just generates more ill will towards the company. There seems to be enough of that already.

I didn’t want another 44 because I was fairly certain it would rust and the rust causes a rash on my wrist. They did send a mailing label for me to return the 44. I just did that 7.13.21 so not sure if I’ll get a refund or not. I’m hesitant to try the 47, but good to hear the contacts are covered. The situation with the 44 is ridiculous.

Agreed. What’s happening here is they’re offering gen1 products that, admittedly, are nicer than their price-point. So where does the value to Wyze come in? The products are underengineered and lack foresight. They’re ostensibly using their customer base as QA. This, in principle, isn’t the worst way to go about things, but Wyze is absolutely not handling it correctly. For instance, what personally burns me about this is that I knew exactly what the issue was, the tech told me what the problem was independently without being prompted, and they CHOSE to send me another, identically defective unit only a few days before they straight-up stopped selling them. That move was 100% to move stock.

I did file a report. I don’t have sensitive skin and broke out in a rash around my wrist. Some people could have a more serious reaction.

Yeah I am on my second watch, just filed another claim. This time I have two terminals rusting. I dont even wear this in the shower or water of any sort. Any one know of any coating that can help? I really like this watch but don’t want to have keep contacting support over this.

It’s really too bad. Not sure why they don’t have some kind of plastic coating over the terminals. I gave up after 1 try and they refunded $20.

I posted on another thread 5 days ago that I had applied automotive clearcoat. So far so good, but…only 5 days.

On my replacement 44 watch, I have added a couple dabs of automotive clearcoat from a touch-up kit I have, onto the magnets, leaving the charging contacts bare. I think repeated rusting is inevitable otherwise. Will see if this prevents it. Wish I would have thought to do this before I started wearing it. I tried to clean off any dried sweat/salt residue before applying the clearcoat. [Capture] 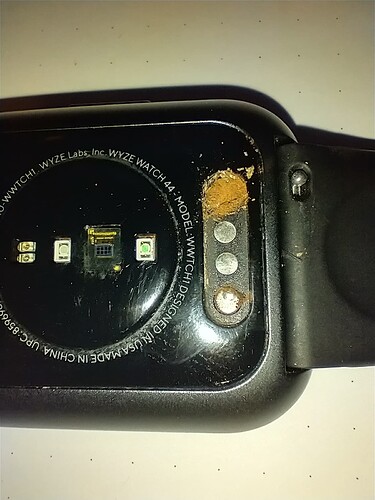 Wyze will replace them with 47s or give credit.

A recall should happen

You are CORRECT!!! So Wyze has quietly remove the 44mm and not informing the buying public?
Did you report this to The U.S. Consumer Product Safety Commission? https://www.saferproducts.gov/IncidentReporting