What does this do or mean? How is this different from before? I mean, I could already see how full an SD card is, and whether it is turned on or off (continuous, events, etc). What other kind of status is there differently than before?

Can confirm that siren control rules now work (Android). My “panic” button that turns on all my v3 sirens now makes a lot of noise!

Question - Have you experienced any issues with the allowable size of the microSD card? Asking as I came across info in other forums that said the max was 64gb for v2.

I have neither found nor heard of any limit (real limit…Wyze will officially tell you the limit is 32GB). I personally use 128GB MicroSD cards in all my V2’s, V3’s and Pan Cam with no problems.

Having said that, you do have format the cards into actual FAT32 format for the V3’s to work (at least as of a couple of firmware tests ago). The V2’s have basically always worked fairly well in exFAT, though I’d recommend putting the cards to FAT32 for those as well.

I’ve read of people testing 256GB cards. I don’t personally know of anyone trying anything larger, so I can’t say if anyone has succeeded or failed with cards over 256GB, but in theory they should work fine if formated to FAT32. Keep in mind that Windows won’t natively allow you to format anything larger than 32GB cards into FAT32, so you have to get a different program to do it for you. I use this one:

Here’s a more elaborate and clear explanation on why Wyze says they’re limited to 32GB but why the Cams can in fact definitely use much larger cards than 32GB:

I don’t represent Wyze, but I can help provide a little understanding on the differences. Differences to understand upfront to not get confused by the rest of the explanation: SDHC and SDXC are capacity standards. FAT32 and exFAT are File Structure formats Class is the speed the SD card can write What it mostly boils down to is the following: FAT32 is basically free to use at this point. It is an older file system and it has some limits (no individual files greater than 4GB), 8TB partitio…

In short, it’s a difference of Capacity standard (SDHC and SDXC) vs file structure standard (FAT32 vs exFAT); and what their default standards and support are. You can make larger cards use the FAT32 file format (not their default exFAT) and then Wyze cams seem to work fine with them.

Thanks for the info. I thought I’d just throw a microSD card in and it would work. Good to know

Hate to bug ya again but how many days of continuous play does your 128gb hold?

A good rule of thumb I’ve found in my experiments is that a V2 seems to use just over 9GB/day, and V3’s use just over 10GB/day (in earlier tests…it was like 10.3 or something…so 128GB cards give about 119GB usable, and 10.3GB/day ended up being close to 11.5 days - just verified on my front V3 today). The difference is presumably due to the higher FPS rate on the V3 (from 15FPS on the V2 to 20FPS on the V3 during daylight recording, which is a 30% upgrade, so I would’ve expected it to use roughly 12GB/day, but maybe it just has better compression or something, IDK, they do seem to function a little differently depending on how much action is on-screen, though I am not sure why.

Those were both tested under the same conditions (no Night Vision). If you have it set to automatic, and they switch to nightvision with IR and lower FPS at night, then in theory your card could last different lengths of time depending on some of those factors.

Additionally you can set it up to only record events instead of continuous and it should last A LOT longer, depending on your sensitivity settings, detection zone, activity in the area, when the activity takes place (night/day) etc.

So there are a lot of things that can make a difference in how long an SD card lasts and how much it records, and those numbers can change over time as Wyze gives updates, but that is what I found the last time I tested my V2’s and V3’s under similar conditions a few months ago…Wyze has done some firmware upgrades since then, and while I don’t think those times have changed much, it is always possible.

And incidentally, you can sometimes just throw a card in and it will work, but sometimes it will go in and out of functionality if it isn’t set to FAT32…so it may seem like it’s working, then go out and not record some events, and that sucks. Best to make sure it works right basically all the time.

Thanks for the confirmation. I was sure that was the case when I read they “upgraded SD card support,” but hadn’t read (or at least remembered) anything concrete that it meant exFAT support. That is good to hear!

Have you heard of anyone using anything bigger than 256GB successfully yet? I mostly keep with 128GB for the sake of cost (it seems to usually be the best price per GB for higher capacity cards), though I could certainly potentially consider something bigger for a couple of cards.

Someone here claimed they were successfully running a 512GB card in a v1 or v2 cam. That was several years ago though… not sure if it really worked, was reliable or even still working today. I only ran one 256GB card as a test to see if it would work. It’s still doing continuous recording on a v2.

All of my cards are Samsung PRO Endurance cards. 128 and 256 get pretty pricey to use in all of my cams so most run 64GB with 4 critical cams running 128GB cards.

On the cost piece. I’m gonn give these a shot from Groupon. Currently $6.99 for 256 GB (but you have to pay shipping). Still, seems like a fair deal 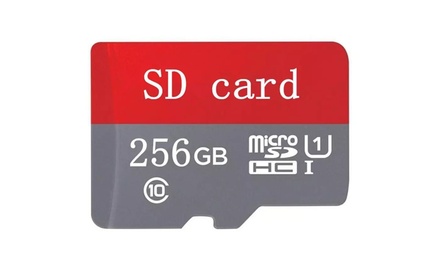 WOW! That’s a STEAL of a deal! THANK YOU for sharing! I usually buy SanDisk 128GB cards for about $15 each, these 256GB cards are AWESOME!

Granted, they’re charging 5.99 for shipping and $0.91 tax, so it ends up at $13.89 for one, but that’s still double the capacity of the normal cost I pay on Amazon! And buying more doesn’t increase the Shipping, so I’ll just buy several.

Plus on top of the normal Groupon discount I also get another 12.7% cashback on the total (shipping and taxes included) of all my Groupon purchases with this special app/membership I have, so that drops the $13.89 down to $12.13 for one, or if I order more than one, the shipping doesn’t change, so 2 cards become just $9.33 total EACH, or 4 of them for just $7.93 Each…I think I’ll buy my daughter one for her phone, and put a few in my primary important cameras.

I can’t thank you enough for this share. I really should check Groupon more often. I’m really excited now.

Price looks too good to be true and there’s a horrific good/bad product review ratio on that item.

If it doesn’t work, I’ll return it

Yeah I saw that and held off for a minute. I’ll follow up with someguy7 after he gets his and see his experience. Apparently the return policy is decent, so it’s still tempting. I don’t critically need any, so I can wait a little. I doubt that deal is going anywhere for a few weeks.

Was this version pulled? Cannot see it in my beta app on iOS…

never mind, didn’t select v3 as beta tester in app, after selecting only one of two cams got beta update notification.

How have those no-name Sandisk lookalike cards been working for you?

Whenever I get generic cards, I’m sorry and they die pretty quick so I’m hesitant to get them.

I’m also careful as there are fakes on Amazon and eBay. If it isn’t in retail packaging, it might be fake.

Haven’t received them yet. They have a 30 day return policy and I plan to take advantage of it in the event they are not up to par. I’ll report back here