I’m having a major problem with Wyze support. I’ve had an issue that began on June 16 and has not been resolved. I’ve heard from about 6-8 different support representatives, but each one has failed to read the history of the problem, and they keep offering the same solutions that show they do not comprehend the problem.

They have sent 19 emails, and three (3!) warranty replacements which were totally unnecessary and did not solve the problem. This is a terrible waste of resources.

I requested several times that the issue be escalated to a higher level, but that never happens.

The problem won’t be resolved unless and until I can reach someone with comprehension. How can I make that happen?

And what is the actual problem you are having?

My Wyze Base (for outdoor camera) will no longer accept a wi-fi network. There are many anomalous symptoms involved, it’s a lo-o-ong story, but three bases exhibit similar symptoms. Meanwhile, 16 other Wyze devices, as well as 47 other devices, are working just fine. Obviously, I know how to add a Wyze base, since I did it originally and it worked for 7 months.

I have tons of screen shots wherein the app can’t recognize the base, can’t recognize the QR code, can’t this, can’t that, failed, failed, failed…bottom line is that a couple of times (out of about 30) I could get it sort of working as long as the Ethernet cable is plugged in, but the bases always refuse to recognize the wi-fi (weird error messages), and thus when I unplug the Ethernet, the bases go offline. I’m pretty sure it’s a firmware problem, but the support reps keep telling me over and over to try the same “fixes” (re-install firmware, reset, repower, reboot Wyze app or iPhone, etc.), NONE of which addresses the issue.

Never heard back after submitting logs, which might actually pinpoint the problem.

I’m wondering now if the problem might be related to the fact that the base’s built-in wi-ﬁ always comes up on channel 11, which is also in use by two of my neighbors, over whom I have no control. Suggested that to the sixth support rep, who responded with instructions for changing my wi-ﬁ channel! Clueless! MY wi-ﬁ is NOT on channel 11!

Or maybe the base doesn’t support one of the settings on my Synology mesh router, such as Smart Connect (2.4/5GHz auto-select), 802.11r, Allow auto-switch to DFS channels, MU-MIMO, or Disable Smart Connect for devices not supporting 802.11v. The following options are NOT set: AMPDU, U-APSD, and AP isolation

Truly frustrated, can’t get a response from anyone who comprehends the problem.

I don’t own any WCO cameras, after reading up on them I found that they would not meet my needs.

I only have V3’s, V2’s and 1 pan cam, So I have no working knowledge with WCO’s and would not be able to help, Sorry…

I’m sorry you’re having this experience. Do you have a ticket number for this?
I would also suggest calling. It may be inconvenient for some users, but you’ll get a better response.

Never heard back after submitting logs, which might actually pinpoint the problem.

“Logs” are not “tickets” that support responds to. Logs are a sort of “black box” file that when you submit goes into a holding area for Support/devs/engineers to pull from when they reference it when you submit a ticket and provide the log number at that time. A ticket is created by contacting support over the phone or online chat. When you submitted the log, the email with the log.nunber should have explained this process and that the step of contacting support was still.needed

I don’t own any WCO cameras, after reading up on them I found that they would not meet my needs.

Didn’t initially meet my needs either, until Wyze added the wi-fi connection capability. That was just what I needed. But it suddenly stopped working on June 16.

I’m sorry you’re having this experience. Do you have a ticket number for this?
I would also suggest calling. It may be inconvenient for some users, but you’ll get a better response.

I’m exasperated. Yes, the app update fixed one problem, but I still cannot connect the base to wifi. Just for fun, I’m going to reinstall the firmware, if I can find it. Anyone see any step I might have overlooked?!

Agree…sent log files 30days ago and created tickets. Nothing either. Support is Very Poor.

Logs are sent to developers and engineers to look at so they can try to fix the issue, but you won’t receive a response for those. You should get a response for a ticket. Is it something the community can help with? Do you have a ticket number?

Hello! Thank you for your patience and sorry for the trouble. I had the team look into this ticket number. They say that we sent instructions for changing the channel on your router and request that you check your spam or junk folders for the reply from us.

We had a DNS server setting issue that caused our emails to go into spam folders. This has been resolved but it’s possible that you were impacted. Our apologies!

The problem has nothing to do with MY router! It has to do with the fact that the base keeps coming up on wifi channel 11, which is already in use by someone (I have no idea who) nearby, over whom I have NO CONTROL. My router is smart enough to listen before choosing a channel, and to adjust as necessary. Currently, it’s all alone on channel 4 (smart!):

The firmware of the base (now updated to 4.16.2.16 released 9 Aug 21) should check for interference, and change channels as necessary, but it arbitrarily and bull-headedly chooses channel 11 every time. That channel is in use by someone, somewhere (I have no idea who!), so there’s nothing I can do about it. But the base firmware should be able to do something about it. Why not come up on channel 6, for example, since it’s clear. Here’s the situation: my router’s 2.4GHz wifi is on channel 4, but one or two others are already on channel 11 (fowlersnotfreewifi/checkoutisat9am, and MySpectfumWiFiBD-2G): 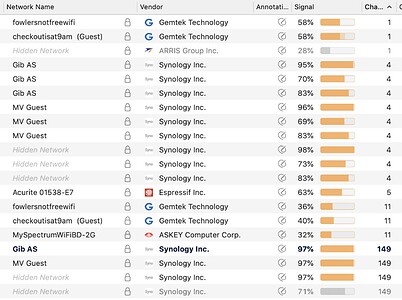 That interference is what I believe to be the point of failure, but I’m certainly no expert. It stopped working with the update to 4.16.2.7 on June 14, 2021 (“Disabled the DHCP server while the Base Station is not pairing or in Travel Mode”…maybe the bug lies here?!). So, if we can make the base come up on a channel other than 11, if that solves the problem, then voilà! If not, perhaps it’s one of the options which I detailed previously that’s causing the problem (yes, the password IS correct!):

If not that either…oh, God, let’s not go back to square one, please. I’ve done every other trouble-shooting step too many times. Cheers,

Further to the above, here’s the poor little base trying to compete on channel 11:

This is some important information! Have you sent this in a reply to support?

This is some important information! Have you sent this in a reply to support?

Yes. Since June 16, there are 49 messages between Wyze support (which is actually a third party, apparently somewhere offshore) and me. That’s an average of 0.82 messages per day.

Most of their responses repeat the same litany of steps. No one checks the history to see what has already failed to work, they just say do it again. They blithely skip over the details. And their suggestions do not address the problem, which it appears they do not comprehend at all.

I’ve asked numerous times for them to “escalate” the issue to a higher level of support, but the responses indicate the same level of competence, so I’m guessing they’re refusing to “escalate.” I’ve also flagged some of the posts in this forum as “other”. I did hear from Wyze Gwendolyn, but it suggested changing my router’s channel…sigh!

I had the team look into this ticket number. They say that we sent instructions for changing the channel on your router and request that you check your spam or junk folders for the reply from us.

It has nothing to do with my router’s channel! Did you see this?

Hi all Wyze give me a 50.00 Amazon card for
Hacking all your problems!
For SD card to work and play back