Am I missing something or are rules extremely basic?

So Im setting up a door sensor and a bulb that I have turn on when the door is opened. My intention was to have this bulb turn off after 5 minutes of the door opening, but I’m not seeing an option? The If section only has time for when to run the rule. I’m actually flabbergasted that I can’t say IF door was opened, turn off light after 5 minutes, within this rule.

If I make a separate rule to shut it off, it will shut off when I’m actually using the light in the living room after 5 minutes, so this doesn’t work.

Seriously disappointed so please tell me I’m missing something!

It would be nice if you could use one rule for turning the bulb on and off. I use the same setup via two rules.

One to turn it on when the back door opens AND it’s between 11pm and 6am.

Then a rule to turn off the light AFTER the back door has been closed for 5 minutes.

I can then open/close the door without it interfering with the timer.

Thanks for showing me the hacky work around @Brian,

So I guess now I am questioning why there seems to be a new hardware announcement every month (with more on the way) but the software side seems very non-user friendly now that I have added 10 or so different devices, instead of just a camera, and want everything to play off each other nicely while also be organized and user friendly. I’ve been waiting for the doorbell and thermostat to see what people say, but might just pick up Nest versions of those if there’s some good BF deals. Dunno. Bummed.

Are you trying to have a bulb gradually increase brightness over time at sunrise? If so you can do this with an Alexa routine.

I have something similar set up. When a motion sensor senses someone approaching my front door, a Wyze bulb lights. Add to that if a camera senses a person approaching, the same bulb illuminates.

The way mine works is either of those instances lights the light. If 45 seconds pass with the light illuminated, the light extinguishes. Also, if a ‘clear’ is received from the motion sensor, the light turns off.

I don’t know hat I would do with 5 minutes, that is way too long, IMO.

Yes you are certainly free to buy Google’s $120 Nest indoor cameras, there never has been an issue with that here. You are free to buy whatever you support.

I’m actually flabbergasted that I can’t say IF door was opened, turn off light after 5 minutes

Super easy. If a bulb has been lit for 5 minutes, extinguish the light. It’s what I do with my 45-second limit.

This is an interior light next to the front door, which is also in my living room, so its going to be used for normal lighting also. But like I said in the original post, “in this rule” to avoid it turning off if it has not been specifically triggered by the door.

I wanted it so ONLY if my door sensor has been tripped do I want it to turn the light on for 5 minutes, and ONLY if it was in and OFF state when the door opened. I don’t want the light turning off after 5 minutes if I have manually turned it on.

This doesn’t seem to crazy to ask for from a “smart” home product does it? 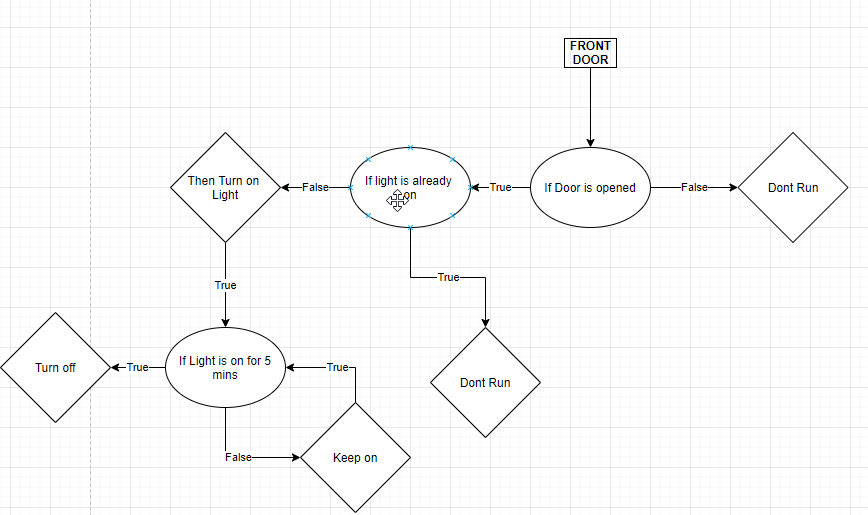 This is why I use either Alexa or Home Assistant for control of my devices.

Using Alexa routines, you can have the light turn on, wait however minutes you desire, and then turn them off again.

Use the exclusion period to prevent the sensor from being retriggered for the same period as your delayed turn off.

Camera1 detects a person (that’s your trigger)
Using custom action, “show me camera1 on echoshow1” as your action, now you have instant display of your camera on your device anytime a person is detected.