Android Testers: Due to app review, app upgrades may not be available until tomorrow

This is still an issue with this beta release

Missing Cooldown Options for the WCO V1 and V2 on iOS

Just installed the new version 2.30.0(a7). The problem of the camera freezing when leaving Event Recordind is still present but in addition, instead of freezing 1 camera, it does it on the others. In addition, no need to go in Event Recording to make them freeze. How to remove the banner on the first page? [image] @WyzeXchen @WyzeBaohua

Action rules are missing from the Pan Cam V2 in both versions. This was in the last Wyze App versions as well. Identified by @runnerxj

When setting new rules I am unable to set the Pan Cam V2 to set off its siren when triggered by something. There is not option for it at all even though the camera has a siren itself. Please fix this asap, I replaced my v3 with a pan cam for more surveillance and now I just lost my night alarm.

These are the only options I get for the Pan Cam V2s now.

My plugs have been flashing since February but giving this firmware a chance. They are now back online… I will report how it goes overnight and the days ahead.

Thank you for the quick fix!

Applied to 14 v3 cams and looking good so far this evening. Will keep an eye this and also Plug 2021s.

I received the update yesterday, the iOS worked fine while loading. Android Pixel 6 requires 2 attempts to load the app. I tap in the App, it starts displays the wyze logo and the closes. I tap on the app again and it loads. I have provided a log file of this, log image below and a video of what I am experiencing. 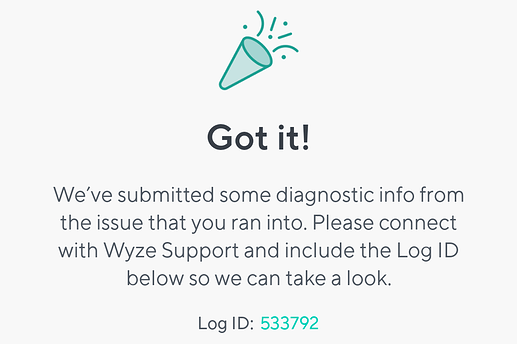 Video of the issue

Android Pixel 6 requires 2 attempts to load the app. I tap in the App, it starts displays the wyze logo and the closes. I tap on the app again and it loads.

I’m seeing the same on all Android phones regardless of OS version. I am not seeing this problem on Android tablets. Don’t have time to submit a log, but will get 'er done later and post a log ID.

I think Wyze rolled the Android App back. I just did an update of my apps on the Google Store and it replaced the Wyze app with 2.29.2.127. So my Pixel 6 is running this version and my Pixel 5 is running the 2.30 version.

I can sideload the old beta version back if necessary, but I can live with this version.

Updated 5 v3 with no issues.

Been running 183 on 4 plugs without issue for a few days.

I think if everyone goes a week without issue then we should be good because blinkers / offline is rampant on released firmware.

Andy, I have a plug that’s offline running the beta.

It was offline… Came back on it’s own.

That’s positive because I have crappy internet, WiFi is good, but actual access to the net can drop for 5 to 20 seconds sometimes.

Slow blinker didn’t come back so pulled and placed back and came online almost immediately.

I’m not 100% clear on the beta policies. Besides reporting here, do I need to report directly to support or just hold tight? Do you know?