Thanks for the information. Trust me, I have had many different camera’s and even hooked up PoE NVR systems as well. My personal goal is to get to one ecosystem and to minimize the maintenance on additional hardware. In my case, I am setup for which ever I decide to do and not beholden to one company at this point. In addition, I have no issue with the Wyze Products. Yes there has been some issues, but nothing to cause me to abandon it. But I would not go as far as to say It’s Dumb to use PoE and associated Splitter to power the Wyze Cam V3’s. But you are allowed your opinions. In addition, I did not want to run electrical drops to the locations where I put my Camera’s, it is far easier and safer to run an Ethernet Cable with PoE on it.

Everyone has their own use cases for what they need and how they would like to do it. You have went the direction of the NVR and PoE Cables, which is a reasonable alternative when using PoE, but I have decided to be setup for any devices I would like to utilize in the future.

As stated, I have no issue with Wyze and their products, and am a firm believer that everyone has the right to setup their system which best fits their needs. As a beta tester for Wyze, my goal is to provide solutions and alternatives to issues individuals are having. Using Ethernet Cable with PoE splitter and switch is a viable solution to someone needing to get power to a location easily.

They said it was in the works

During the AMA they indicated that and in another Forum Topic it was mentioned again. Either way, the V3’s have been a great camera for me.

I wish Wyze comes up with CAT wired cameras for a true home security system.

To all nay sayers. We do not want to REPLACE wifi. We want the OPTION to get PoE cameras. Im slowly moving away from wyze because they are incredibly unreliable. I have changed everything i can to appease the wyze gods but it will still buffer or act “offline”. Its a shame since the camera size and image quality is great.

a wyze version V3b with PoE and ONVIF protocol would basically dominate the indoor market. Since the next best option are bulky turret style poe cameras.

Out of curiosity, which cameras did you buy? Are they PTZ or do you have to aim them manually?

Amcrest. They have all types of cameras. I chose them since they have a similar wide angle 2.8mm. since they are onvif i can just add them to my regular security system to record and do sll the fancy stuff. Makes it so much easier since now i can access all of it from one ip address and loads almost immediately.

I totally agree I’m searching alternative to Wyze v3 that could match the size attributes (1080p is sufficient) and connection via ethernet either dedicated RJ45 or via ethernet adapter.

So far I had no luck. I think I will end up making my own

Lol i figured as much. There is nothing in the market like it… and i went the same route lol. Bouhht a couple of cheap poe cameras without housing at aliexpress and im planning on gutting two old wyze cams to reuse the housing.

A easy consideration is

Somehow, despite it already being referenced in this thread, I had missed that the V2 already has full USB Ethernet support in the Dafang Hacks project until @sysop made a post at

There is a hack for V2 WyzeCams: USB to Ethernet adapter - how to setup · Issue #1176 · EliasKotlyar/Xiaomi-Dafang-Hacks · GitHub

Very cool. What a shame Wyze never released their own V2 adapter or official support, and people are still waiting on V3 support.

Hmm, wonder if it could be done with the Wyze RTSP firmware too.

it would also eliminate the crappy 2.4ghz wifi connection… ugh to 2.4ghz… why on earth they are not on 5ghz is beyond me… 2.4gh is noisy, receives lots of interference. its just crap. and also, its not 1992 for crying out loud! DeVoiD.

Noisy, perhaps. But do you you really want more cam signal drops for the cams in far corners of the property? 2.4ghz is preferred for it’s stability over distance. And, if we had them on the 5ghz, then they would be fighting for the fast lane and bumping uglies with our streaming and gaming. What would be nice is dual band hardware that we could lock in at our own discretion or allow to auto switch depending on signal strength and traffic.

get another base station, plus i dont think i agree 100% with 5ghz dropping more than 2.4ghz… even if that were true, 2.4gh is so affected by interference, the offset would still be 5ghz being better… i deal with wifi for over 12,000 devices daily… so its not like im new at this.

get another base station

I’m not entirely sure what base stations have to do with the discussion given that the majority of the product range of Wyze cams, and arguably their most widely sold cams, operate without any base station.

Nor am I. We can certainly have a discussion as to the benefits and drawbacks of each freequency band, however those qualities already mentioned are a matter of physics, not preference. While 5ghz does provide greater speed and bandwidth, particularly for the primary function of the cam: to stream video, it does not do well at those functions at any considerable distance. In fact, 2.4ghz has nearly twice the range of 5ghz which is a direct result of the lower freequency.

As we both indicated, the lower freequency band is subject to more interference, especially with the proliferation of WiFi enabled IoT.

As I stated, I would prefer to see dual band devices that would allow me to set the freequency band at my own discresion. 5ghz for cams that are close to the router\extender, 2.4ghz for those farther away. This would also allow for site specific settings for those in a congested apartment complex with less distance constraints and more low band collateral interference as opposed to those in rural areas with more distance constraints but less collateral interference.

I would prefer this because users should have the option to choose based on their own personal preference and individual landscape requirements. If you prefer speed and bandwidth with less interference rather than longer distance, you should have the ability to choose that. Or at least buy a product that supports your preference.

But, alas, we don’t have that option yet. And, in the absence of that option, I am satisfied that Wyze, like the majority of security cam manufacturers, chose the lower band for it’s signal distance superiority. It provides a much greater flexibility in cam placement while not sacrificing too greatly in signal and bandwidth stability. I have cams that are far beyond the capability of 5ghz. My phone switches to the 2.4ghz band before I am half way to the cam and I am using a very highly rated long range mesh router with an extender.

My comments aren’t about which band is better. They both have their benefits and drawbacks. But, given a choice between one or the other for my cams, I would choose the 2.4ghz because they fit my needs better. Your needs are going to be different.

The wz_mini_hacks solves this problem for V3 cams by not requiring any change to the camera’s firmware: GitHub - gtxaspec/wz_mini_hacks: wz camera mods... make your camera better.

There was a problem reported earlier regarding the UCTRONICS micro usb->ethernet POE adapter. Apparently, that has been fixed. With wz_mini_hacks, you can achieve true POE with WyzeCam V3 cameras.

From UCTRONICS: “We have shipped a new batch of products, and the ASIN is B0B9ZLVGJ4. You can check this ASIN to get a link.”

Can also confirm the wz_mini_hacks works with Pan V2, regular V2 (there may be some hardware variations creating problems for these) and Pan V1. At the moment, you may need a linux system to generate the files for the V2 and the Pan V1 although an alternative installation method is being tested. For the V3 and Pan V2 there are no changes to the firmware on the camera, you just load the wz_mini_hacks from the SD Card when the camera boots. The other cameras need a tweak to the firmware, hence the need for linux.

A bonus for the Pan V2 is you get RTSP (also with the others, but without the need for the Wyze RTSP firmware).

Would you describe a way or develop an adapter to allow power over internet for WYZECAM V3. Obviously this is possible as I just saw a guy on YouTube “jury-rig” such a set-up using a whole bunch of aftermarket connectors & splitters. What a great product to sell to folks wanting to place their outdoor cameras (like the V3) outdoors where the WIFI signal from their router is weak and there is no electrical outlet nearby, as in my case. Simply run an ethernet cable from a router to a power ejector near the router then send both the signal and power to the V3 through an adapter to the camera. Check this out on YouTube: 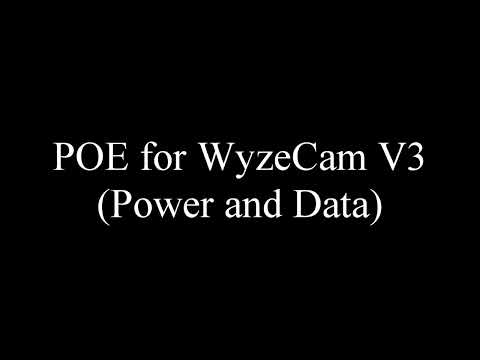